Flower power can transform bleak houses into inspiring Edens that nourish the mind, body and spirit 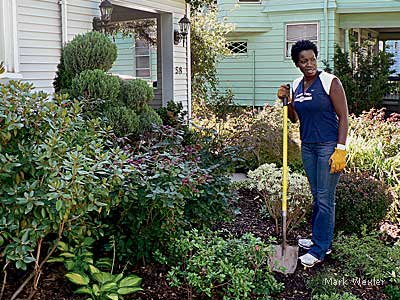 WHEN NICOLA ALLEN AND HER HUSBAND, ALDWIN, first moved into their home on Burton Street in north Hartford, Connecticut, 15 years ago, the bleak scene daunted her. “I fell in love with the house but disliked the neighborhood. We had gun violence, loitering, noise, petty crime, littering. We would sweep the lawns of trash before mowing. We didn’t even have robins, cardinals or blue jays here. It was difficult emotionally for me to function.”

For three years, Nicola sought sanctuary by spending hours after her night shifts as a mental health counselor driving through suburban neighborhoods that had the look and feel she wanted in her community. One day, she realized what those houses had that appealed to her: beautiful gardens that weren’t surrounded by fences. Although she “didn’t know a pansy from a marigold,” she vowed she would stop window-shopping at other people’s lawns and create her own “Garden of Eden.”

Nicola read about different kinds of plants and then asked a local gardening center to design a landscape for her. She planted her garden and, eventually, took down her chain-link fence. “My neighbors told me I wasn’t very smart and asked why we would put our future children in jeopardy. I remember having sleepless nights afterwards.”

But rather than suddenly being vulnerable to a wave of crime, Nicola saw people stopping to look at her garden. She began offering to plant gardens in neighbors’ yards if they would also remove their fences. The couple even bought three houses on the block just so they could take down their fences and rent them out. Now nearly every fence is gone, and flowers flourish in most of the yards. Nicola has become a stay-at-home mother of three children and relishes the hours she spends gardening. “I see it as cheap therapy. I just feel better.”

Nicola stumbled upon what researchers have been saying for decades yet now the healthcare community, urban planners and government agencies are acknowledging: Green spaces can revitalize a person physically, psychologically and socially. Environmental psychologist Kathleen Wolf at the University of Washington has gathered more than 1,800 research papers spanning the last 40 years—most published in the past decade—which show that green spaces in cities can provide a number of benefits. These include: faster healing; reduced ailments such as high blood pressure and diabetes; increased coping and learning capacity; promotion of a sense of community and self-esteem; and, in some cases, reduced crime.

With funding from the U.S. Forest Service, Wolf is conducting a multiyear review of scientific studies about these benefits to determine what kinds of green spaces produce what effects and their economic value. This information could help urban planners trying to green their cities to find shared funding sources with the public health community, which, Wolf says, is realizing it has to have “an integrated approach of nutrition and activity as well as prescriptions to achieve holistic health.”

So what makes nature so powerful? Our reactions to it may stem from our deep evolutionary roots, says child environment and behavior researcher Andrea Faber Taylor. She and her colleague Frances Kuo at the University of Illinois have based their research of our relationship with our environment on the Attention Restoration Theory, which says that we have two kinds of attention: directed and involuntary.

“We only have a finite capacity for effortful attention. By making yourself stay on task, you can become fatigued, irritable and eventually less productive,” explains Taylor. “Things in nature—insects, birds, moving tree leaves, flowing water, fire—are naturally fascinating to us because as humans evolved, those who paid attention to these things were better able to survive. We are calmed and our directed attention is restored by green spaces because viewing them is a gently engaging experience.”

The body of evidence indicating that, as Taylor says, “a green space is not just an accessory but actually a necessity for human health,” is growing. Children may particularly benefit from spending time outdoors. NWF’s recent Green Time for Sleep Time  report cites research suggesting that outdoor play can improve children’s abilities to sleep and therefore to concentrate and do better in school. Kuo and Taylor are investigating how much green time might help alleviate symptoms of attention deficit–hyperactivity disorder (ADHD), which the Centers for Disease Control and Prevention says could affect as many as 5.4 million U.S. children. Kuo and Taylor reported in 2011 that a nationwide survey of 421 parents of children with ADHD indicated children who played regularly in green settings had milder symptoms, resulting in better concentration and less impulsive behavior.

Yet the majority of U.S. youth are spending more time indoors than any previous generation. NWF’s Be Out There™ campaign cites research that says each day, U.S. children spend an average of more than seven hours in front of electronic media and as little as four to seven minutes in unstructured play outdoors. The consequences of this “nature-deficit disorder,” as author Richard Louv called it in his 2005 book Last Child in the Woods, includes childhood depression, asthma, vitamin D deficiency and type-2 diabetes.

Some health care professionals have decided to address these problems by writing “prescriptions for nature.” Paul Dykema, a pediatrician since 1967 in Holland, Michigan, says he has seen “a dramatic increase during the past 20 years in obesity, ADHD, depression, anxiety and school underperformance in my patients. One-third of my patient visits deal with these conditions.” This prompted him to begin writing prescriptions for decreased “screen time,” 15 minutes of reading and one to two hours of unstructured outdoor play per day. The U.S. National Park Service also is encouraging doctors to write “Park Prescriptions” advising patients to spend time in these green spaces.

However, home and school gardens and green play areas may have the greatest healing potential. Kuo and Taylor have found that the size of the green space is not as critical as whether it is considered safe, accessible and easy to incorporate into a routine.

NWF’s Certified Wildlife Habitat™ program provides guidelines on how to create your own wildlife and personal sanctuary, whether on your balcony or in your community. NWF’s Schoolyard Habitats® program has provided habitat guidelines and curricula to schools since 1996 and now has certified more than 4,000 schoolyards. These outdoor classrooms teach environmental stewardship and teamwork while increasing self-confidence and improving academic performance, especially among minority students and those from under-resourced communities. Some cities and organizations also offer funding for community or school gardens. Since 1982, the National Gardening Association’s Kids Gardening program, for example, has awarded more than 9,650 garden grants, reaching an estimated 1.6 million youth.

Nicola Allen has received several city and nonprofit organizational awards for her volunteer and landscaping efforts, some of which have helped fund what has become a living legacy. She helps maintain a garden at her children’s school and continues to seek ways to turn more of Hartford from blight to bloom. But perhaps the most changed are her neighbors. Frances Skeete has lived on Burton Street for 30 years and says since Nicola moved in, the changes she’s seen are “remarkable”: less crime, people taking better care of their homes and exchanging plants, and children playing in the street. Nicola is “a force to be reckoned with,” Skeete says. “She has made the entire block blossom, and not just with flowers. She has caused us all to grow.”

Anne Bolen is the managing editor of National Wildlife.

NWF’s Be Out There™ campaign offers a variety of activities and other resources for parents and educators to encourage children to enjoy our natural environment. These include a downloadable parent’s guide, Green Time for Sleep Time,  and other materials. For gardening tips, information about native plants and how to entice wildlife to your yard, visit www.nwf.org/nwfgarden.