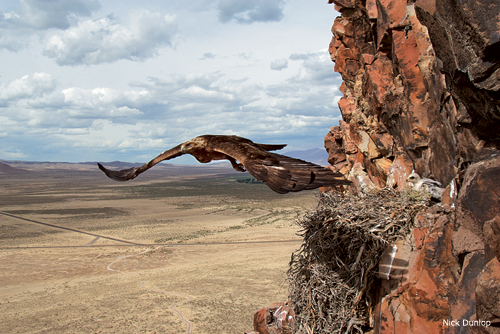 EVERY SPRING FOR THE PAST SEVEN YEARS, California photographer Nick Dunlop has gone on the hunt in the remote reaches of western Nevada’s Great Basin and Black Rock Deserts. “I go to the desert because nobody’s out there,” he says. His quarry: golden eagles nesting on the sides of cliffs that might tower 400 feet high. His gear: a collapsible blind and a selection of fast, telephoto lenses that allow him to capture images of skittish raptors that may be 200 feet away.

How to Photograph an Eagle 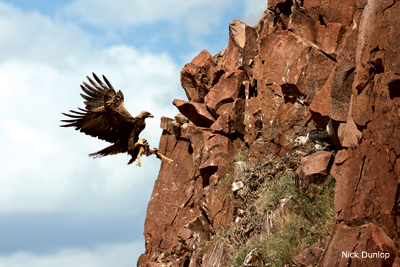 Dunlop seeks out the birds primarily during April and May, when Nevada eagles are hatching their young. “I do a lot of hiking and driving,” in search of nests, he says. “A lot are accessible, but it often seems like you’re hiking forever to reach some of them.” He is familiar with a number of nests, or aeries, which can measure as many as 6 feet across. “I monitor them each year and use a spotting scope to see what the eagles are doing.”

He looks for nests that stand opposite hillsides or cliff faces that he can reach on foot and where he can set up a blind. Capturing his images may require that he spend an entire day in a blind with outside temperatures approaching 100 degrees F. Wind may batter his setup. “If I leave a blind up too long, it’ll be destroyed,” he says.

He also positions remote-control cameras with wide-angle lenses in or near aeries for shots that combine a nest with more distant backgrounds, such as the flat lands sprawling below. The eagles, he says, generally ignore remote-control cameras close to their young but will pay attention to the blind, at least initially. If he finds that the birds are not coming into the nest because of the blind, he takes it down and moves away. Some eagles are skittish, others not. Especially memorable, he says, was one blasé female that flew into the nest and calmly fed its young while Dunlop was only 20 some feet away setting up a remote-control camera. 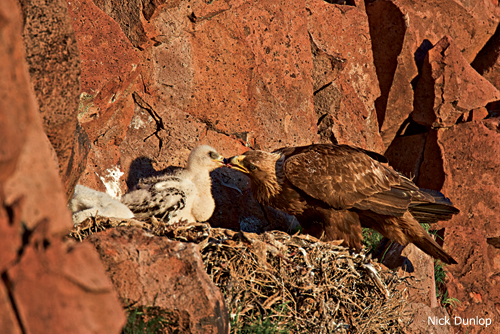 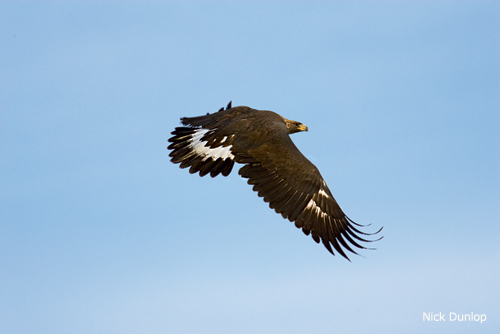 Golden eagles range across most of the Northern Hemisphere. With a wingspan that can approach 7 feet, the eagles are powerful and maneuverable fliers. They feed on a wide variety of prey, from rodents to reptiles, including animals that may nearly match an eagle’s own body weight of more than 14 pounds for the largest females and less than 9 pounds for large males.

The birds tend to mate for life and to claim territories of 8 to 12 square miles where, over the years, they may build and maintain more than a dozen aeries in trees and on cliffs. “Many cliffs have half a dozen nests on them,” Dunlop says. “It’s rare to find a cliff with only one.” Females lay one to four eggs at a time, though usually two, of which one typically survives the two months needed before fledging.

Dunlop says he has had a camera in his hands most of his life but really started getting serious about photography “with the digital age.” Using digital cameras, he says, “I can shoot in the morning and have an 11 by 14 picture on the wall by dinner.”

Throughout its 76-year history, NWF has a long record of successful efforts to protect habitat for grizzly bears, Florida panthers, bald eagles and other North American predators. Most recently, working with ranchers and federal authorities, the Federation has secured more than 620,000 acres of prime habitat in the Northern Rockies through its Adopt-a-Wildlife-Acre program.

Roger Di Silvestro is a National Wildlife senior editor and author of the book Theodore Roosevelt in the Badlands: A Young Politician’s Quest for Recovery in the American West.