Young male sparrows no competition, lizard-inspired adhesives and the silent screams of tarsiers 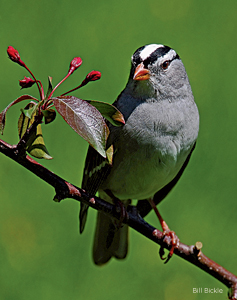 Songs of Young Sparrows are No Call to Arms

Researchers have found that an older male white-crowned sparrow will generally ignore young males singing in his territory but will turn aggressive if he hears a rival his own age. “These male sparrows assess an opponent’s fighting ability based on age,” says Angelika Poesel, lead author of the study and curator of Ohio State University’s Borror Laboratory of Bioacoustics. “A young male is just not going to scare an older one.” Other research suggests that younger males are less successful at attracting females than are older males. “That means older males see these young birds as little threat to them and not worth a lot of attention,” Poesel says. The study is one of the first to suggest that some birds determine a potential rival’s age and threat level by its song.

Stick Around for a Lizard-inspired Adhesive

It’s about the size of your hand and looks like a piece of fabric covered on one side with rubber, which is exactly what it is. But it has a sort of super power: A sample about the size of an index card “can hold up a maximum of about 700 pounds while adhering to a smooth surface such as glass,” says Alfred Crosby, a polymer expert at the University of Massachusetts–Amherst who helped create the adhesive device, called Geckskin. He and his colleagues modeled the adhesive after the feet of geckos—lizards that can run up walls. Like gecko feet, the adhesive has both rigid and flexible components. The researchers used Geckskin to attach a 42-inch flat-screen TV to a piece of glass, then took it off without leaving a sticky residue. “Twist it instead of pulling on it, and it comes off with zero force,” Crosby says. It can stick to drywall, wood, metal and various plastics, leaves no trace on any surface—just like a gecko—and can be reused.

The Silence of the Tarsiers

Tarsiers—5-inch-long, nocturnal primates from Southeast Asian islands—sometimes gape open their mouths as if calling but make no sounds audible to humans. Perplexed by this behavior, Sharon Gursky-Doyen, an anthropologist at Texas A&M University, used an ultrasound detector to test 35 tarsiers taken briefly from the wild in the Philippines and found they were not silent after all. They make calls that, at 70 kilohertz, are among the highest-pitched ever found in any terrestrial mammal and far above the range of human hearing, which tops out at 20 kilohertz. Some other primates use ultrasonic sounds as part of their vocalizations but, says Marissa Ramsier, an anthropologist at California’s Humboldt State University who headed the study on tarsier calls and hearing, “This is the only primate we know of that makes calls completely inaudible to us. They also make vocalizations we can hear.” Tarsiers may use ultrasound as a sort of secret system for warning one another of lurking predators deaf to the sounds. The ability to hear high frequencies may allow tarsiers to locate insect prey, too, Ramsier says.