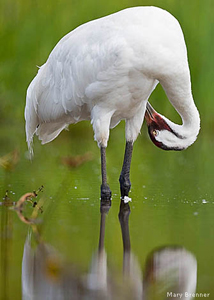 As part of its work to safeguard the nation’s vast water resources, NWF keeps a sharp focus on protecting U.S. wetlands, from small prairie potholes in the Upper Midwest to vast estuaries such as the Chesapeake Bay. In addition, the Federation is actively involved in the fight to ensure that the federal Clean Water Act (CWA) remains a strong shield against the destruction of these resources.

Despite the important role the CWA has played for the past 40 years in making a safer, cleaner environment for U.S. citizens, the law’s reach has eroded during the past decade. In 2001, the U.S. Supreme Court limited its scope for wetlands physically separated from “navigable” waters, erasing protections for many bogs, potholes, lakes and other “isolated” waters.

Then in a 2006 ruling intended to clarify the court’s previous ruling, four of nine justices favored broad protection while four others wanted to narrow the law’s scope to waterways that are navigable, “relatively permanent” or closely connected to such waters. Justice Anthony Kennedy, the ninth judge, was inclined toward broad protection in cases where a “significant nexus” existed between the wetlands at issue and downstream navigable waters.

The split ruling “created a big mess,” says Jan Goldman-Carter, NWF water resources counsel, putting at risk many of the streams from which some 117 million U.S. citizens get at least part of their drinking water. One result: The U.S. Environmental Protection Agency (EPA) and the U.S. Army Corps of Engineers, the agencies charged with CWA enforcement, now often decline to take action against irresponsible polluters because officials are uncertain about which waters are protected.

On another front, the U.S. House of Representatives last year passed a bill designed to undercut the CWA further by, for example, restricting the EPA’s ability to implement the act without state permission. “Make no mistake, this bill would take the environmental cop off the beat and put at risk drinking water for millions of people,” says NWF President Larry Schweiger. The Federation helped defeat the bill in the U.S. Senate, but the fight continues to restore the law’s critical protections.

NWF’s current efforts to restore federal protections for all U.S. wetlands and other waters—and the wildlife that depend on them—could not succeed without your help. In 2011 alone, NWF members contributed $182,000 to these efforts.

On Saturday, June 23, join families having fun across the country by simply opening the door and sleeping under the stars. Your children’s health will benefit—and you can win a trip! The Great American Backyard Campout also offers you the opportunity to raise funds to support NWF’s programs that connect youth to the outdoors. Sign up at www.backyardcampout.org.

In the rush to find alternative energy solutions, power plants in the Southeast have turned to burning wood to make electricity to offset some use of fossil fuels. In addition, seven southeastern states are exporting wood pellets to Europe.

While this may eventually reduce fossil fuel use and heat-trapping carbon dioxide in the atmosphere, a recently released study, Biomass Supply and Carbon Accounting for Southeastern Forests, says that burning such wood would produce higher levels of atmospheric carbon for 35 to 50 years compared to fossil fuels. Also, as the wood industry expands and existing wood supplies deplete, standing trees instead of residues from sawmills and other sources would be used. This raises questions about the wood industry’s impacts on wildlife habitat.

NWF Director of Agriculture and Forestry Programs Julie Sibbing says, “To regrow trees to recapture carbon released during burning of such wood would take too long to justify using mature trees to generate electricity.”

The Biomass Energy Resource Center conducted the study in partnership with the Forest Guild and Spatial Informatics Group on behalf of NWF and the Southern Environmental Law Center.

Disney has awarded NWF $100,000 for its programs that connect children with nature. NWF President and CEO Larry Schweiger and 15-year-old Malcom Barnard accepted the award for NWF at the Disney Kids and Nature Celebration, held in April at the Walt Disney World Resort in Florida.

Barnard was one of four NWF-inspired students among 100 chosen to attend the celebration, which included the Disney Worldwide Conservation Fund Awards Ceremony and the Disney Friends for Change Youth Summit. The summit focused on conservation leadership.

“These Disney Kids and Nature champions are an inspiration, as they demonstrate how conservation stewardship is alive and well in our nation’s youth,” Schweiger says.

Barnard led the effort to have his hometown of Johns Creek, Georgia, become an NWF-certified wildlife community. Summit attendee Brandon Dykes, 17, from Atlanta, Georgia, served as president of his high school’s Earth Tomorrow® Club, an NWF program that introduces teens to environmental issues and careers while teaching them leadership skills. Two other attendees, Renee Whalawitsa, 11, and Daveishena Redhouse, 10, worked in their schoolyard wildlife habitat on the Navajo Nation in Shiprock, New Mexico. Read more about these winning students and meet Malcolm Barnard through this YouTube video.

NWF partners with one of the nation’s largest school districts

Laura Hickey, NWF’s director of EcoSchools USA, says, “We are thrilled that this program is able to reach so many diverse students.” 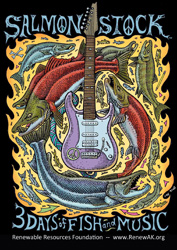 NWF Alaska affiliate Renewable Resources Coalition presents Salmonstock, August 3 to 5, in Ninilchik, Alaska, a music and arts celebration of wild Alaskan salmon and the communities that depend upon them. Attendees also can learn to protect Bristol Bay, the world’s largest wild salmon fishery. Go to www.salmonstock.org for tickets.

The Healing Our Waters-Great Lakes Coalition, of which NWF is a member, recently released The Case for Federal Farm Bill Conservation Programs in the Great Lakes Region. This report shows how the bill has funded farmers’ efforts to protect natural resources, increase productivity, avoid costs such as insurance payoffs for crop damage and provide jobs.

Congress cut funding for Farm Bill conservation programs by more than $1 billion during the last two years, and more than $6 billion in cuts have been proposed.

Such cuts could be detrimental to the Great Lakes, which in recent years have had a resurgence of toxic algal blooms fed by fertilizers and manure from industrial agricultural practices. These blooms degrade water quality, kill fish, close beaches and cost local businesses. Farm Bill conservation programs provide financial support to farmers who take specific actions to protect the environment, such as controlling runoff pollution. 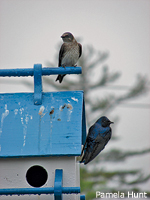 NWF affiliate New Hampshire Audubon (NHA), in collaboration with the New Hampshire Fish and Game Department, recently released The State of New Hampshire’s Birds: A Conservation Guide. This birder-friendly primer is based on the organization’s 2010 assessment of the 186 bird species that breed in the state.

The report reveals that about one-third of the state’s breeding species and more than half of the state’s 18 aerial insectivore species (birds that capture insects while flying, including swifts, swallows, nighthawks and flycatchers) are declining. Another third of the state’s birds are increasing or stable; trends for the final third are unknown. Reasons for the declines could include climate change, pesticides, human disturbance and habitat loss.

“At the national level in the U.S., people haven’t really looked at this trend for insectivores before,” says NHA Avian Conservation Biologist Pamela Hunt, who wrote the assessment.

One of the outcomes of the report was the creation the organization’s Swallow Colony Registry, or Swallow CORE. New Hampshire has six breeding species of swallow, five of which have been declining since the 1960s. This citizen-science project is recording only the nesting areas of barn, cliff and bank swallows as well as purple martins, however, as “They are the ones most in decline and, as colony dwellers, potentially the most vulnerable to losing large numbers of breeding pairs in one event,” says biologist and Swallow CORE Project Coordinator Rebecca Suomala.

More information about Swallow CORE and the Conservation Guide—which features colorful photos of birds and their habitats, a bird population primer and ways to help birds—is available at www.nhaudubon.org.

At least 26,000 registered voters must sign a petition to list the amendment on the November ballot. If voters approve, the resulting Clean Water, Lands and Outdoor Heritage Fund will provide grants for projects that improve water quality; implement natural flood control; provide habitat for fish, game and wildlife; improve parks; and provide incentives for working farms and ranches to improve wildlife habitat.

“North Dakota provides important habitat for birds and other wildlife,” says Tom France, NWF northern Rockies and prairies regional director. “This initiative will help save this legacy.“ For more information, go to www.ndheritage.org.