NWF View: Return of the Bison and the Power of the One Who Insists 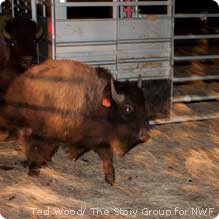 “The unique power bestowed on each individual human being to do good and even change the course of history is quite often underestimated. Even with sophisticated organizations working on the cause of a conservation ethic, there is a tendency of most individuals to say, ‘What can I do?’ The same kind of logic prevails in elections when they say, ‘What can my vote do?’” –Ralph W. Abele, from “One Who Insists”

RALPH ABELE UNDERSTOOD how one individual could change the course of history, perhaps from his bloody experience as a company commander in the U.S. Army’s Third Armored Division, which invaded the beaches of Normandy in June 1944. The sole survivor in his landing craft, Ralph pressed on in four more European military campaigns before he later became one of my most inspiring Boy Scout leaders.

I thought of his admonition in March as I watched Sioux, Assiniboine and Gros Ventre tribal leaders celebrating, singing and even weeping as 61 wild bison were released on Montana’s Fort Peck Reservation. For more than a century, Native Americans had sought to restore genetically pure bison to their treaty lands. This wintery night was a poignant moment in the tribes’ long struggle for justice and restoration of their heritage.

The Long Struggle to Bring Bison Back to Tribal Lands

For most Americans, returning bison to tribal rangelands makes perfect sense, but to many nearby ranchers it constitutes a threat. So for decades, the last herd of free-roaming, pure American bison has been restricted largely to Yellowstone National Park. During those years, some 7,000 of the herd’s “excess” bison have been killed rather than moved to suitable native-grassland habitats.

NWF has been committed to the restoration of bison to key western rangelands. For the past 20 years, the Federation has had formal ties with many tribes and the InterTribal Bison Cooperative, sharing a goal of restoring the animals to reservation lands.

After many concessions by the tribes and by state wildlife and federal agencies, the American bison finally came home on March 19 to Montana tribal lands. I witnessed this historic release during a brief nighttime blizzard. The drama was punctuated by last-minute courtroom maneuvers to block the release by ranchers who are concerned about loss of grazing areas for their livestock and damage to cattle pastures from escaped bison—two unwarranted fears. They will continue to fight the release.

Most people do not appreciate the deep ties connecting American Indians with bison or the full extent of the injustice caused by the slaughter of the animals in the late 19th century. Bison provided Indians with food, shelter and much more; they were central to tribal histories, cultures and spiritual life. We may have called these groups “Plains Indians,” but they consider themselves “buffalo people,” descended from generations of ancestors whose survival was intertwined with the thundering herds.

Witnessing History and a Victory for Wildlife

While participating in a press conference celebrating the release, I heard Fort Peck Assiniboine and Sioux Tribal Chairman Floyd Azure reflect on the historic moment. “When we signed the Fort Laramie Treaty in 1851, we were told we would be able to hunt as long as the buffalo roam,” he said. “That was taken from us, but the return of these bison will help heal some of the wounds gone by with the U.S. government.”

This was a great day for all tribes and for the American bison. Perseverance by many partners, including the tribes, federal and state agencies, and dedicated efforts by NWF staff, donors and board members over many years finally has paid off. The new Fort Peck herd eventually will be divided, with some bison going to the nearby Fort Belknap Indian Reservation where the Assiniboine and Gros Ventre tribes also will propagate their own genetically pure bison.

“One person with enough tenacity can dig in his heels and say, ‘This much and no more.’ ... There are great causes to be followed, and victory always starts with one person hanging on by his teeth and saying, ‘I will never give in.’” –Ralph W. Abele

I cannot remember an easy victory in conservation. Every change we try to make to benefit wildlife is met with pushback of one sort or another. To win the important battles ahead, we must be steadfast and even stubborn, willing to hang by our teeth. Your continued support matters to bison and to the future of all wildlife. Working together, we can and must win the battles for the natural world and for our children’s future. We must never give in!