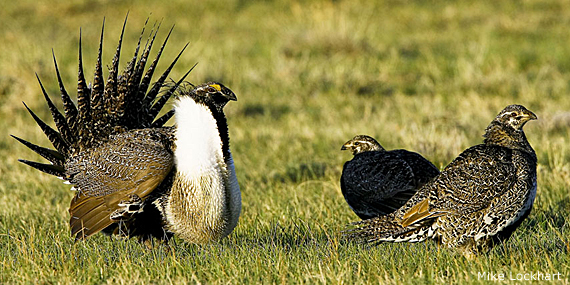 While most wildlife enthusiasts may not pay much attention when Congress rewrites federal farm policy every five years, they actually have a lot at stake in this legislation. “The Farm Bill is the largest source of funding for wildlife conservation on U.S. private lands, providing benefits for wildlife species ranging from sage grouse (above) and northern pintails to rainbow trout and bog turtles,” says Julie Sibbing, NWF director of agriculture and forestry public relations. “This past year, the bill provided $2.6 billion for wildlife protection and recovery.”

Important components of wildlife conservation financed by the Farm Bill include the Conservation Reserve Program and the Wetlands Reserve Program. Such measures help to protect, restore and enhance wildlife habitat and the quality of soil and water on intensively managed agricultural lands. They also provide about 33 million acres of wildlife habitat, exceeding the 26 million acres protected under the National Wildlife Refuge System in the Lower 48 states.

Congress is in the process of reauthorizing the Farm Bill. NWF is supporting key provisions important for wildlife and wildlife habitat, such as:

• Attaching minimum conservation measures to all farm subsidies: Since 1985, most farmers have had to abide by two basic conservation provisions as a condition of receiving federal subsidies: protecting wetlands and controlling soil loss from erosion-prone land. These requirements have been credited largely with turning the tide on wetlands loss from agricultural lands (above, left) and keeping soil erosion from choking lakes, streams and rivers. Yet because of changes proposed to the Farm Bill this year, the largest federal benefit most farmers receive—premium subsidies for crop insurance—will no longer be subject to these requirements. NWF is working to block this potential loophole, which could lead to increased flooding, dredging and water-treatment costs; destruction of native fisheries; and the loss of tens of thousands of acres of wetland habitats and countless tons of soil.

• Protecting remaining grassland habitat: Native grassland is one of North America’s most rapidly declining ecosystems, with the result that grassland-dependent wildlife (left) is decreasing at alarming rates. High grain prices are pushing crop cultivation far into areas previously considered too marginal to farm, resulting in the destruction of remaining grasslands. NWF has been working to reduce the incentive to plow native grasslands by limiting the amount of subsidies farmers would get if they bring these lands into crop production.

• Ensuring adequate funding for conservation programs: In this time of tight budgets, cuts to all Farm Bill programs are likely. NWF is working to ensure that funding to protect and restore wildlife habitat is maintained at adequate levels and is not disproportionately targeted for cuts.

“The Farm Bill has an enormous impact on fish and wildlife populations in this country,” Sibbing says. “Many conservationists don’t realize that a piece of agricultural legislation has such far-reaching implications for everything from nongame wildlife to endangered species to animals hunted and fished. The vote on the Farm Bill is one of the most significant for conservation in the months ahead.”

NWF’s efforts to support U.S Farm Bill conservation measures could not succeed without your help. In fiscal year 2012 alone, NWF members contributed $58,000 to these efforts. To learn more, visit www.nwf.org/farmbill.

NWF was among the coalition of conservation groups that gathered and delivered 3 million comments to the U.S. Environmental Protection Agency this year in support of the first national limits on carbon pollution from new coal-fired power plants. This was the largest number of public comments ever submitted to a U.S.federal agency. See www.nwf.org/3million for more information.

Conservationists had good reason to celebrate in June, when Congress overwhelmingly passed the RESTORE Act, which dedicates billions of dollars in fines owed by BP and others responsible for the Gulf oil disaster to restoring the region’s communities and habitats.

Passage of the bipartisan measure marked the culmination of two years of efforts by NWF and its partners, which had worked closely with key congressional lawmakers to help craft the legislation. “The RESTORE Act represents one of the most important investments in natural resources in the nation’s history, a critically needed commitment to Gulf Coast ecosystems and the people who depend on them,” says NWF President Larry Schweiger. “It is a huge win for the brown pelicans, dolphins, sea turtles and other wildlife that still are being impacted by the 2010 disaster.”

The landmark legislation is part of a transportation bill that also contains important provisions to reform the National Flood Insurance Program. It does not, however, include language that would force construction of the controversial Keystone XL tar sands oil pipeline—a provision NWF had strongly opposed. “This is a testament to how Americans can hold our elected officials accountable to protecting the nation’s wildlife,” adds Schweiger. 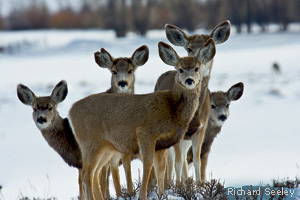 Federal officials will take another look at managing the public land on western Colorado’s Roan Plateau after a federal judge rejected a plan for drilling for oil and gas there.

In June, U.S. District Judge Marcia Krieger ruled that the Bureau of Land Management (BLM) failed to consider more protective approaches and didn’t adequately analyze the drilling’s impacts on air quality. The ruling sends the plan back to BLM for revision.

The decision stems from a 2008 lawsuit filed by conservation, hunting and angling groups, including NWF, Trout Unlimited and the Colorado Environmental Coalition. Earthjustice represented the coalition. The Roan, which rises as high as 9,000 feet, provides important habitat on its plateau and at its base for wildlife, including some of the nation’s largest mule deer (left) and elk herds as well as fish favored by anglers, such as native cutthroat trout.

“Judge Krieger’s decision reinforces our obligation to consider wildlife, habitat and local community impacts as a priority instead of an afterthought,’’ says John Gale, NWF’s Southwest regional representative. “We have a second chance to get it right on the Roan.”

Last winter’s near-record warm temperatures and lack of snowfall across much of the United States left both wildlife and sporting enthusiasts scrambling to adapt to conditions that may be a preview of what we can expect in the years ahead. That’s one of the conclusions of a new NWF report, On Thin Ice: Warming Winters Put America’s Hunting and Fishing Heritage at Risk.

The report, which includes firsthand accounts by experienced hunters and fishers, details the effects of climate change during winter on a number of key game species. Moose in parts of New England and the upper Midwest, for example, are suffering—and in many cases, dying—from unusually large infestations of winter ticks normally killed off by cold weather. In many areas, trout and other freshwater fish are struggling to find enough cool water as river temperatures rise and snow packs decline. And in some regions, ducks and other waterfowl are either shortening their migrations or sometimes not migrating at all.

“It’s impossible to ignore the changes happening before our eyes,” says NWF President Larry Schweiger. “This report is a timely reminder of the critical importance of landmark limits on industrial carbon pollution that were unveiled earlier this year by EPA.”

Join NWF to Hike and Seek

Come to NWF’s fall 2012 Hike & Seek events in one of six cities and you and your family can raise funds for NWF while spending a fun-filled Saturday exploring nature. Kids can enjoy scavenger hunts and making crafts with naturalists while taking a 1- to 2-mile hike, seeing live animals and more. Register at www.hikeandseek.org.

Reaching Out Virtually to Save Bats 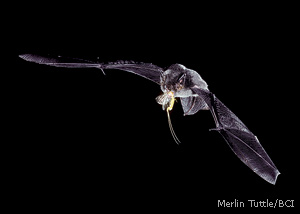 During 2012, United Nation’s International Year of the Bat, NWF joined forces with Bat Conservation International and other organizations to host a series of webinars to inspire adults and students to help conserve these imperiled flying mammals. The interactive sessions with renowned bat experts allow participants to learn and share information with hundreds of people across the country.

The first webinar, held in April, covers basic bat facts, including the vital role bats play in ecosystems and white-nose syndrome, one of the greatest threat to bats in North America. Since 2006, this fungal disease is estimated to have killed at least 5.5 million bats and affected 11 bat species in eastern United States and Canada, including the endangered Indiana and gray species (above).

The next two classes give educators tips how to teach about bats, one offers a virtual field trip to Bracken Cave in Texas, home to endangered Mexican free-tailed bats.

The final webinar on October 11 discusses why bats live in caves and karst and ways that we can help these amazing animals. Register for, or watch BatsLive webinars at www.batslive.pwnet.org. Download the Night Friends activity guide and learn more about bats from www.nwf.org/bats.

Community Wildlife Habitats range in size from a neighborhood to an entire county. Monte Sano is a mountaintop neighborhood within the city limits of Huntsville. Fayetteville is the largest city in northwestern Arkansas.

Combined, these communities have nearly 300 homes as well as schools, businesses and places of worship that provide habitat for wildlife. They also have added native plants to parks and community gardens and removed invasive species. In addition, the communities have held workshops about gardening for wildlife and sustainable gardening practices.

“Both of these communities were trailblazers in their respective states,” says Roxanne Paul, senior coordinator of NWF’s Community and Volunteer Outreach Program. “Now neighboring communities have become interested and hope also to be recognized in the same way by NWF for creating Certified Wildlife Habitat® sites across their community, in homes, schools and public places.”

To learn how to get your own community certified, go to www.nwf.org/community.

Thousands of seedlings and connections with nature planted 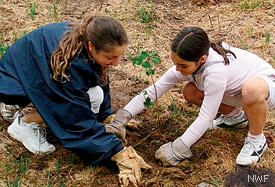 More than 5,000 youths planted about 20,000 trees during 95 events that NWF’s Trees for Wildlife program hosted in 2012 across the United States. The events included restoring 200 trees to tornado-torn Joplin, Missouri, planting 500 trees in drought-ravaged Houston, Texas, and reclaiming an empty lot for an inner-city schoolyard in Miami, Florida.

But the students’ experience with nature doesn’t end when the shovels are put away. Participants from grades K through 12 learn how trees help not only wildlife but ourselves, as we depend on trees for clean water, air and many of the products we use. The students also commit to tending their trees for a year. “Through learning about and caring for trees, students create a foundation to build a lifelong connection to the environment,” says NWF’s Education Program Director Eliza Russell. All the seedlings provided to schools and youth groups were funded by NWF, donors, corporate sponsors, grants and individuals. In 2013, the program is striving to plant 75,000 trees in honor of NWF’s 75th National Wildlife Week. To help support this effort, go to www.nwf.org/treesforwildlife.