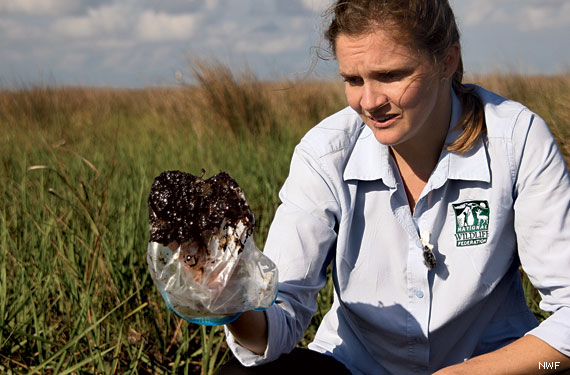 Your Dollars at Work: Restoring a Devastated Ecosystem

With your help, NWF is fighting to save Gulf of Mexico wildlife

April 20 marks the third anniversary of the BP oil spill, one of the most destructive environmental disasters in U.S. history. Before the well was capped, more than 200 million gallons of crude oil gushed into the Gulf of Mexico, killing or injuring thousands of birds and other wildlife, polluting hundreds of miles of habitat and devastating local economies.

NWF established a fund dedicated to help cope with the disaster, raising some $3.3 million in donations from more than 53,000 citizens—including many Federation members—and 21 companies. The funds have enabled NWF to respond on the ground and on Capitol Hill. Although the Gulf’s marine and coastal ecosystems are still struggling to recover, following are some of the ways the Federation has applied the fund to restore this damaged region during the past three years:

• During the disaster, NWF trained more than 300 volunteers to watch for distressed wildlife, oil slicks and other impacts, resulting in more than 5,000 reports being filed. 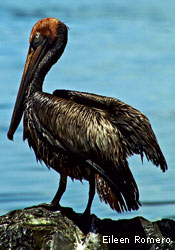 • NWF provided funding to Florida’s Sea Turtle Conservancy to help relocate eggs from 277 sea turtle nests on oiled Florida and Alabama beaches. From these eggs, 14,676 hatchlings emerged and were released into the Atlantic Ocean, including endangered green and Kemp’s ridley turtles and threatened loggerheads.

• NWF and other organizations partnered with the 100-1,000 Restore Coastal Alabama project to begin rebuilding 100 miles of oyster reefs and 1,000 acres of marsh and seagrass habitat that will serve as a barrier against severe weather and coastal flooding.

• In April 2012, NWF published A Degraded Gulf of Mexico: Wildlife and Wetlands Two Years into the Gulf Oil Disaster. This report grades the region’s coastal wetlands’ health as “poor” and reveals that more than 500 dolphins, some 600 sea turtles, nearly 600 brown pelicans and unknown numbers of deep-sea corals have been found dead in the aftermath.

• In July 2012, NWF and partners released the report Common Ground: A Shared Vision for Restoring the Mississippi River Delta and hosted a congressional briefing that was instrumental in making sure fines would fund Gulf restoration.

• NWF and its partners successfully pressed the U.S. Congress to pass the RESTORE Act in 2012, which dedicates 80 percent of all civil penalties from the oil disaster to restore the ecology and economy of Gulf Coast states as well as to fund marine research and ecosystem monitoring. It also will help restore the natural flow of the Mississippi River, currently blocked by levees, so that the sediment it carries can rebuild wetlands in the rivers’ delta.

• The Federation continues to serve the Gulf by bringing local government officials, citizens and business owners together for workshops to strategize how best to apply the RESTORE Act funds toward revitalizing Gulf ecosystems.

“The Gulf of Mexico is an American treasure,” says David White, director of NWF’s Gulf of Mexico Restoration Campaign. “We’re committed to ensuring that the RESTORE funds go toward restoring the Gulf’s fish and wildlife habitat, improving its water quality and increasing the resiliency of its coastal ecosystems, which will help stimulate the local economies so dependent on these natural resources.” To learn more, visit www.nwf.org/restoration. 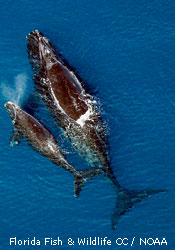 The agreement strategically prohibits or limits sound-producing surveys for potential wind-farm sites during the whales’ peak migration season, from November through April. Research has linked loud underwater noises to hearing loss and disruption of communications in marine mammals, which could cause them to be disoriented, interfere with feeding and increase their vulnerability to ship strikes and predation. The agreement also requires increased whale monitoring and reduced vessel speeds during migration.

“This landmark agreement ensures wind power can both stem the impacts of climate change and minimize its own effects on marine wildlife,” says Justin Allegro, NWF’s renewable energy and wildlife program manager. Find out more at www.nwf.org/offshorewind.

Nearly four decades after the U.S. Congress determined that California’s Drakes Estero should be declared a federal wilderness free of human development, the estuary finally received that protection, thanks in part to NWF, its partners and more than 52,000 comments of support they helped generate. Drakes Estero, the ecological heart of Point Reyes National Seashore, is home to 20 percent of California’s breeding harbor seals, tens of thousands of shorebirds and waterfowl, and 35 species of fish.

A commercial oyster farm within the estuary had the right to continue operating until 2012. The Drakes Bay Oyster Company purchased the farm in December 2004 knowing its lease would expire but then campaigned to extend it, even as the California Coastal Commission determined the farm violated required protections for harbor seals and other wildlife. The Obama administration granted the estuary full wilderness protection in December.

Although the oyster company has filed a lawsuit in protest, NWF continues to fight for this wilderness. “The administration’s decision was the right one for people and wildlife,” says NWF Senior Counsel Melissa Samet. “Wilderness designation ensures that this ecological treasure will be protected for generations to come.” For more, go to www.savepointreyeswilderness.org.

Why urgent action is needed to protect ecosystems and communities

Citing documented case studies from across the nation, a new NWF report details how the climate crisis already is changing the playing field for wildlife and its habitats. “Some of America’s most iconic species—from moose to sandhill cranes to sea turtles—are seeing their homes transformed by rapid climate change,” says NWF Climate Scientist Amanda Staudt, lead author of Wildlife in a Warming World: Confronting the Climate Crisis. “This is the most serious threat facing America’s wildlife and requires action at the local, state and federal levels.”

The report features examples of wildlife struggling to adapt to the effects of warming in eight regions of the United States, from the Arctic to the Atlantic Coast. It also recommends a four-pronged attack to deal with the crisis, including steps for cutting levels of carbon pollution 50 percent by 2030 and promoting climate-smart conservation plans to safeguard habitats.

“We can’t leave these problems for our children and grandchildren to fix,” says NWF President Larry Schweiger. To read the full report, go to www.nwf.org/climatecrisis.

Honoring Those Changing the Forecast for Wildlife

Join NWF at its annual National Conservation Achievement Awards and Dinner May 2 in Washington, D.C., to honor those who are “Changing the Forecast for Wildlife” and you can support NWF’s work. Among the recipients will be Disney, former U.S. EPA Administrator William Reilly,  and NBC Environmental Correspondent Anne Thompson. Go to www.nwf.org/connies for details about tickets and sponsorship opportunities. 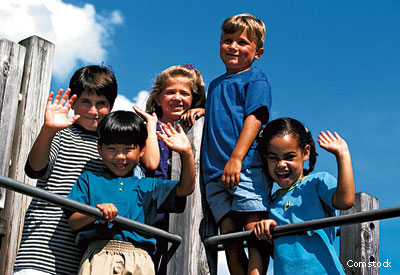 The American Academy of Pediatrics recommends that elementary schools provide students with a regular routine of daily recess. Yet, at about 30 percent of U.S. elementary schools, the recess bell is often silent.

NWF has launched the Ranger Rick Restore Recess Campaign to help revive recess in schools. “Recess has traditionally been a gateway to the outdoors for children. Nine million students are not getting the benefits from recess they could, including being more attentive in class and developing critical social skills,” says Allen Cooper, NWF’s director of state and local education advocacy.

The campaign provides parents and teachers an audit tool to evaluate their school’s recess policy as well as a guide for talking to school administrators and state education boards about the importance of having a strong recess policy. NWF recommends that such a policy include offering natural areas in which to play. Go to www.nwf.org/recess for these and other related resources.

Is Your School Cool?

Take the challenge to reduce carbon emissions and it could be

Want your school to be cool? Take the Cool School Challenge, which gives students and teachers practical strategies to reduce their production of carbon dioxide and other greenhouse gas emissions as well as their operational costs in just 40 days.

Student teams recruit as many of their school’s classrooms as they can to participate. Then, they conduct a school energy audit and track their school’s progress by uploading data to a carbon calculator that tallies carbon emissions and cost savings.

Schools that complete the challenge can update their online dashboard to publicly display their carbon reduction. They will automatically receive a bronze award through the Eco-Schools USA program.

Through its Eco-Schools USA program, NWF has partnered with the National Aeronautics and Space Administration (NASA) since 2010 to create Climate Change Connections, a curriculum that allows students to learn about weather, climate and other ecological trends by accessing online NASA satellite data.

“Because climate change is one of the most vital environmental issues of our time, young adults need to understand the principles of Earth ecology and the impacts of climate change,” says Laura Hickey, NWF senior director for Eco-Schools USA. “Students also need to learn how to communicate about climate change and make informed decisions about their actions. NASA data gives them hands-on experience with real-world information, putting them in touch with the science behind climate change.”

The curriculum offers 21 lessons in four modules on topics such as land-surface changes, the effect of ice cover on climate, impacts of heat waves on human health, changes in precipitation patterns and solar- and wind-energy potential at participating schools. Eco-Schools USA provides curricula on conservation and the environment for some 1.3 million students and 85,000 educators in more than 2,300 schools nationwide. For more, visit www.eco-schoolsusa.org. 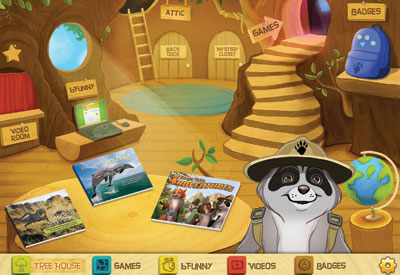