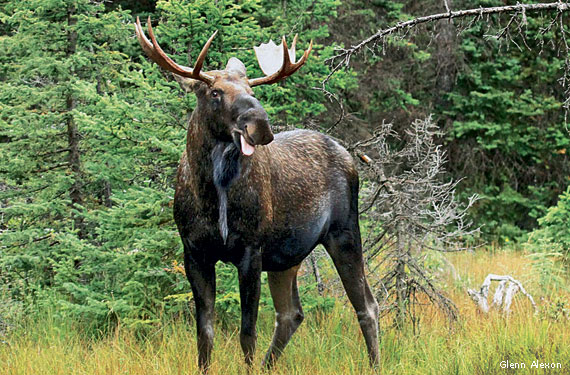 Safeguarding wildlife and communities in a warming world

Climate change is altering wildlife habitat and devastating communities. For more than four years, the Federation has worked with conservation partners to help wildlife managers and city planners be climate smart—to anticipate climate change impacts and to develop proactive conservation tactics that can help make habitats and communities more resilient. Here are some ways that, with your support, NWF and its partners are helping people and wildlife adapt to a warming world:

• In 2009 and 2011, NWF hosted national conferences on climate change adaptation for policymakers, wildlife managers and conservationists seeking to chart new policies and practices for safeguarding wildlife and their habitats.

• NWF has been helping wildlife and city managers assess the vulnerability of habitat and species to climate change. In 2011, an NWF-led expert working group produced the award-winning Scanning the Conservation Horizon: A Guide to Climate Change Vulnerability Assessment, which the U.S. Fish and Wildlife Service adapted to train hundreds of natural resource managers. NWF also has carried out climate change vulnerability assessments at Massachusetts’ Parker River National Wildlife Refuge as well as other locations along the Atlantic Coast, in the Great Lakes and in the Pacific Northwest regions.

• NWF is developing guidance for wildlife managers to incorporate climate considerations into their conservation strategies, and it has been a leader in making sure climate adaptation is incorporated into state wildlife action plans.

• The Federation is also helping communities use nature-based approaches to build climate resilience. For example, in Washington, Ohio and Michigan, NWF has encouraged landowners to plant tree species that can survive in a warming climate while reducing carbon pollution, storm-water runoff and flooding.

• NWF is helping restore habitats to address impacts of climate-fueled storms, sea-level rise and drought. In the wake of Hurricane Sandy, NWF partnered with the U.S. National Park Service and others to replant dune grasses in New York (right). With support from NWF members and the Wildlife Conservation Society’s Climate Adaptation Fund (supported by the Doris Duke Charitable Foundation), NWF is working with the Delaware Division of Fish and Wildlife to create coastal impoundments farther upland so they can survive sea-level rise. And along Ohio’s Black River, NWF worked with local partners to design an innovative river-restoration project that maintains fish-breeding habitat despite fluctuating water levels. 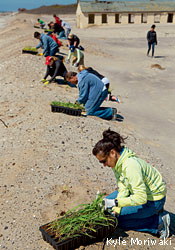 • NWF offers many online resources about climate change, including Wildlife in a Warming World: Confronting the Climate Crisis. This 2013 report covers how a changing climate is affecting wildlife in eight U.S. regions, including moose (above), which have been dying in the Midwest from increased temperatures and parasite infestations.

“Climate adaptation increasingly will define 21st-century conservation, and NWF is at the forefront of this issue,” says Bruce Stein, director of NWF’s Climate Change Adaptation program.

Your donations of more than $200,000 in the past year have supported NWF’s efforts to safeguard wildlife from the impacts of climate change. To find out more, go to www.nwf.org/climate-smart.

Three years after some 200 million gallons of oil gushed into the Gulf of Mexico and washed onto about 1,110 miles of shoreline, “the impacts of the disaster continue to unfold,” says Doug Inkley, NWF senior scientist and lead author of the NWF report Restoring a Degraded Gulf of Mexico: Wildlife and Wetlands Three Years into the Gulf Oil Disaster.

The report summarizes the status of Gulf bottlenose dolphins, Atlantic bluefin tuna, shrimp, sea turtles, brown pelicans and coral. Revealing is that the number of dolphins found dead since the oil spill has been unprecedented, with the number of dead infant dolphins being found at six times the historic rate during January and February of this year. “These ongoing deaths—particularly in an apex predator like the dolphin—are a strong indication that there is something amiss with the Gulf ecosystem,” says Inkley.

While shrimp and brown pelicans show signs of recovering, more than 1,700 sea turtles were found stranded between May 2010 and November 2012, and a recent study shows the mix of oil and dispersant reduces the ability of some coral species to build reefs. Download the full report and find out more at www.nwf.org/threeyearslater.

Residents forced to evacuate and hundreds of animals killed 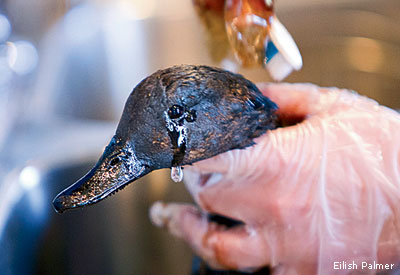 In March, an ExxonMobil pipeline carrying tar sands oil from Canada cracked in Arkansas, spilling an estimated 500,000 gallons of oil into residential yards, streets and a nearby wetland. NWF staff and Board Member David Carruth arrived within days of the disaster and were able to evaluate some of the damage, but Exxon prevented access to much of the polluted area.

The oil caused residents to evacuate more than 20 homes and covered, killed or otherwise affected more than 1,000 animals, including hundreds of amphibians and reptiles that had to be euthanized on site. The HAWK (Helping Arkansas Wild Kritters) Center immediately took on rehabilitating recovered animals (including this oiled duck being washed), but soon Exxon took over rehabilitation efforts.

NWF’s Campus Ecology® program has partnered with the Energy Action Coalition to host Power Shift, the largest U.S. youth environmental conference, to give college students tools and connections so they can work toward a clean energy future. This year’s conference will be held October 18 to 21 in Pittsburgh, Pennsylvania. Visit 2013.wearepowershift.org for more and to share this information.

Hundreds of thousands of acres and their cultural heritage now protected 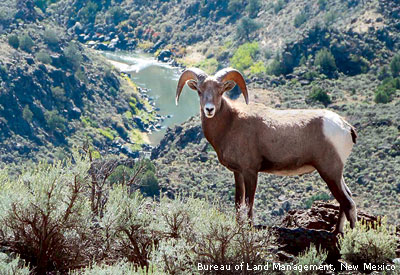 This spring, President Barack Obama designated Rio Grande del Norte and four other U.S. landscapes and historic sites as national monuments. This provides permanent protection for its more than 240,000 acres of public land, something that sportsmen, local businesses owners, ranchers and conservation organizations, including NWF and its state affiliate the New Mexico Wildlife Federation, have worked toward for more than a decade.

“In addition to its world-class fisheries and wildlife, this iconic topography has a rich cultural history that is now properly protected and recognized,” says John Gale, NWF’s regional representative. The Rio Grande River Gorge divides its rocky landscape, serving as a migratory flyway for birds such as golden and bald eagles, falcons and sandhill cranes and as a corridor for big game such as bighorn sheep  and mule deer. Prehistoric American Indian archaeological sites are throughout the area.

A recent economic assessment says that naming Rio Grande del Norte as a national monument could bring an additional $15 million to the region from increased tourism and employment. Go to www.riograndedelnorte.org for more.

Waste from hard-rock mining is contaminating as much as 40 percent of western headwaters and significant amounts of American Indian lands, states NWF’s report Honoring the River: How Hardrock Mining Impacts Tribal Communities.

“Lax Clean Water Act regulations allow mining companies to dump millions of tons of toxic waste into our rivers, lakes and wetlands each year,” says Tony Turrini, an NWF senior attorney and an author of the report. “These loopholes must be closed.”

“Access to clean drinking water, clean air and healthy fish and game are inherent human rights that no lawmaker can give away,” says Mike Wiggins, chairman of the Bad River Band of the Lake Superior Tribe of Chippewa Indians, whose land has been threatened by a proposed open-pit iron mine.

Go to www.nwf.org/honoringtheriver to download the report and Mining Imperilling Bull Trout to learn about mining impacts on Montana bull trout and tribes.

NWF now offers online resources to help parents and educators explain the causes and effects of natural disasters such as tornadoes to youth. See www.eco-schoolsusa.org/tornadoes.

Baltimore is for the Birds 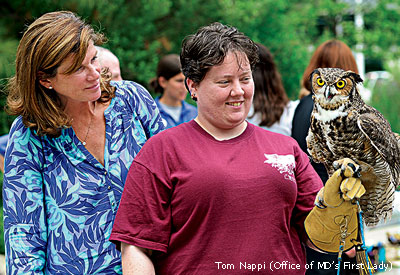 First Lady of Maryland Katie O’Malley (far left)joined leaders from NWF, the National Aquarium and Baltimore this past May to launch an effort to green the city. If Baltimore residents certify at least 600 homes, 10 parks and six schools as wildlife habitat sites, the city would become one of the more than 60 NWF Community Wildlife Habitats® and the largest along the Chesapeake Bay.

Development and agriculture have degraded the bay’s water quality. More green spaces could reduce storm-water runoff and help Baltimore have a “healthy harbor,” one that is swimmable and fishable by 2020, a goal NWF and other conservation groups are working toward. Increased habitat could also attract many native species, including Baltimore’s iconic oriole and great horned owls, such as this one that O’Malley admired at the program’s initiation.

“Baltimore has always been a city for the birds,” says Hilary Falk, NWF mid-Atlantic regional executive director. “We can help its citizens create beautiful green spaces that serve as habitat for wildlife and offer opportunities for them to connect with nature.” To certify your own green space, go to www.nwf.org/nwfgarden.

NWF has partnered with World Makers, Inc., to highlight those passionate about nature conservation. In addition, 20 to 40 percent of purchases at www.worldmakers.com/nwf goes to NWF.