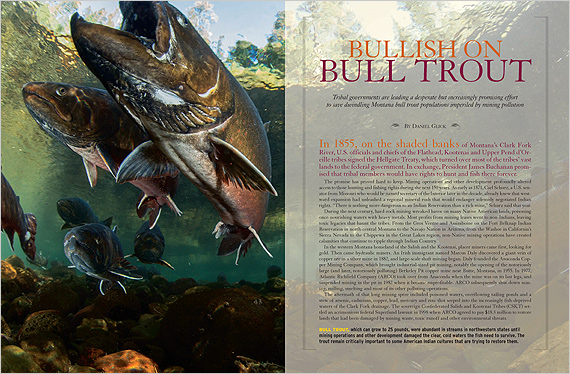 IN 1855, ON THE SHADED BANKS OF MONTANA'S CLARK FORK RIVER, U.S. officials and chiefs of the Flathead, Kootenai and Upper Pend d’Oreille tribes signed the Hellgate Treaty, which turned over most of the tribes’ vast lands to the federal government. In exchange, President James Buchanan promised that tribal members would have rights to hunt and fish there forever.

The promise has proved hard to keep. Mining operations and other development profoundly altered access to those hunting and fishing rights during the next 150 years. As early as 1871, Carl Schurz, a U.S. senator from Missouri who would be named secretary of the Interior later in the decade, already knew that westward expansion had unleashed a regional mineral rush that would endanger solemnly negotiated Indian rights. “There is nothing more dangerous to an Indian Reservation than a rich mine,” Schurz said that year.

During the next century, hard-rock mining wreaked havoc on many Native American lands, poisoning once-nourishing waters with heavy metals. Most profits from mining leases went to non-Indians, leaving toxic legacies that haunt the tribes. From the Gros Ventre and Assiniboine on the Fort Belknap Indian Reservation in north-central Montana to the Navajo Nation in Arizona, from the Washoe in California’s Sierra Nevada to the Chippewa in the Great Lakes region, non-Native mining operations have created calamities that continue to ripple through Indian Country.

In the western Montana homeland of the Salish and the Kootenai, placer miners came first, looking for gold. Then came hydraulic miners. An Irish immigrant named Marcus Daly discovered a giant vein of copper ore in a silver mine in 1882, and large-scale shaft mining began. Daly founded the Anaconda Copper Mining Company, which brought industrial-sized pit mining, notably the opening of the notoriously large (and later, notoriously polluting) Berkeley Pit copper mine near Butte, Montana, in 1955. In 1977, Atlantic Richfield Company (ARCO) took over from Anaconda when the mine was on its last legs, and suspended mining in the pit in 1982 when it became unprofitable. ARCO subsequently shut down mining, milling, smelting and most of its other polluting operations.

The aftermath of that long mining spree included poisoned waters, overflowing tailing ponds and a stew of arsenic, cadmium, copper, lead, mercury and zinc that seeped into the increasingly fish-deprived waters of the Clark Fork drainage. The sovereign Confederated Salish and Kootenai Tribes (CSKT) settled an acrimonious federal Superfund lawsuit in 1998 when ARCO agreed to pay $18.3 million to restore lands that had been damaged by mining waste, toxic runoff and other environmental threats. 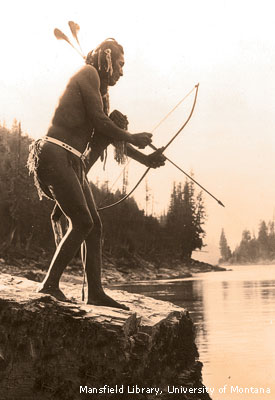 A key component of the settlement called for restoration of bull trout populations in the Clark Fork River Basin. Bull trout hold a traditional importance to these tribes, since the salmonids historically were abundant enough to provide food even when other game was scarce. The fish were so huge—they can grow to 25 pounds—and the waters so clear, that Indians used bow and arrow to capture them (left). That abundance declined precipitously in the wake of mining and other development. In 1998, the fish was listed as threatened under the federal Endangered Species Act.

The bull trout, says Germaine White, CSKT information and education specialist, “are like the grizzly bear of the water.” Not only do they need an expanse of high-quality habitat to roam, but when they thrive, it’s likely that many other fish, plants, critters—and people—will as well.

In northwestern Montana, the sprawling, 1.3 million acres of forested valleys and mountains that comprise the Flathead Indian Reservation are capped by enormous Flathead Lake in the north and include the prairies of the National Bison Range Wildlife Refuge to the south. Like much of the West, the land and its nonhuman inhabitants have taken a beating from grazing, roads, dams, agriculture, mining and other development. Traditional Indian ways of foraging riverbank plants for food and medicine, of subsisting on bull and cutthroat trout, whitefish, deer, elk, grouse and waterfowl, and of engaging in cultural activities such as dancing and building ceremonial sweat lodges deteriorated over time as well.

But as in many tribal communities in the United States, environmental restoration efforts grew out of the strong Native American cultural renaissance that emerged in the 1970s. Although many tribal members are more likely to shop at a chain grocery store than stockpile smoked fish or venison, subsistence hunting and fishing still remain vital components of modern life. Seasonal harvests of roots, berries, fish and game retain both dietary and cultural significance.

Consequently, using ARCO settlement money the tribe embarked on an ambitious program to restore degraded streams, focusing on tributaries of the Jocko River, which feeds into the Clark Fork. “We live at the backbone of the world where the water begins,” says White, a member of the Pend d’Oreille tribe. That backbone was damaged but not broken, so the tribes began addressing what White calls the “four C’s: cold, clean, complex, connected water.”

Giving Fish a Fin Up

Even before the ARCO settlement, the CSKT had been working on restoring damaged bull trout habitat. Compared to many river fish, bull trout need colder water, cleaner streams and more complex habitat that includes riffles and pools as well as undercut banks and fallen logs. They also need connected habitat to spawn and feed. Development projects such as dams have affected fish-spawning patterns by changing water flow and temperature and by cutting streams into disconnected fragments. 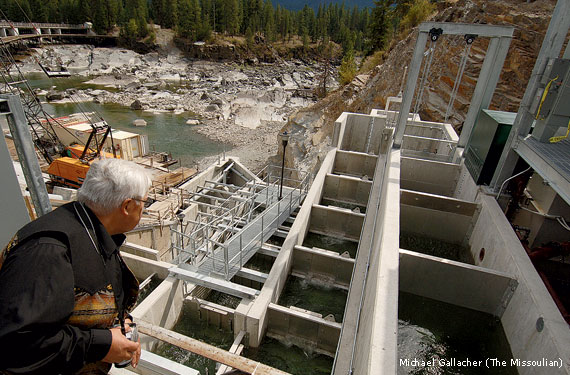 Tribal biologists instituted a watershed approach for their efforts, successfully petitioning in 1986 to divert more water from agriculture into the Jocko River, which served as bull trout core habitat, and starting a trout catch-and-release policy a year later. They worked with federal and Montana state wildlife managers and utility company PPL to install a $7.5 million fish ladder at Thompson Falls on the Clark Fork River (above), allowing fish to migrate past a 913-foot dam to upriver spawning areas for the first time in a century.

They also installed fish screens and selective trapping devices that allowed native species to spawn but weeded out invasive fish, and they replanted riparian areas and wetlands with native reeds, forbs and grasses. They even relocated tribal members’ homes that had been built on riverbanks and in floodplains. The preliminary results: improved riparian health, new aspen growth, improved water flows and increases in migratory bull trout numbers. “The restoration is going swimmingly,” White says, but adds, “We need to measure these improvements for generations. Not just bull trout generations but human generations.”

Today, near the CSKT lands, two new hard-rock mines, the Rock Creek and the Montanore, have been proposed by different U.S.-based minerals companies. Both have faced stiff opposition from residents and conservation groups. The Rock Creek mine application was first stopped by a federal judge for an insufficient environmental review. The company reapplied, only to have the Montana Supreme Court rule that the new application was also inadequate for protecting water quality. The Montanore would require underground excavation that involves pumping groundwater from the mine, changing local hydrology and further affecting prime bull trout territory that the tribes have been improving steadily. Both mine owners continue to press forward in the face of widespread public concern.

Fortunately, bad mines can be made much better. Tony Turrini, NWF senior counsel, says that all mines must comply with federal and state environmental laws. However, the federal Clean Water Act—the nation’s key means for protecting its waters—is itself in need of an upgrade. Two legal loopholes in the act, Turrini says, allow mining companies to dump untreated tailings and other mining waste directly into wetlands, streams and lakes. More specifically, federal regulations allow mining companies to treat waters as “waste-treatment systems,” which are not protected by the act, and to treat mining waste as “fill material,” which is not subject to normal pollution standards.

Both of these loopholes can be closed by simple regulatory changes rather than congressional action. “Everybody ought to agree that we shouldn’t discharge toxic mining waste into waters that we drink and that sustain our wildlife,” Turrini says. Changing those loopholes would set a higher bar for other proposed hard-rock mines, including the vast Pebble Mine in Bristol Bay, Alaska, that threatens more than two dozen Alaska Native communities.

Meanwhile, tribes are still being cheated, says Garrit Voggesser, NWF’s national director of tribal partnerships: “The crux of this issue is the treaty rights and how those are skirted in the name of economic development. The obligation of the federal government was to protect those resources in perpetuity, and those obligations have been ignored.”

For the Salish, Kootenai and Pend d’Oreille, says the CSKT’s White, restoring the bull trout is both a cultural and a spiritual obligation. “We need to try to restore the damage to the natural world and become whole again,” she says. “Restoration represents one possible pathway for all to follow.”

NWF in Action: Working for Tribes and Mining Reform

NWF has a long history of working on conservation issues with tribes. The Federation recently released a new report on mining and tribal lands, Honoring the River: How Hardrock Mining Impacts Tribal Communities. NWF also is seeking to protect public lands through mining reform and other measures, including efforts to stop the Pebble Mine in Alaska’s Bristol Bay area, a prime salmon-breeding site important to bears and other wildlife.