Continuing the fight against climate change 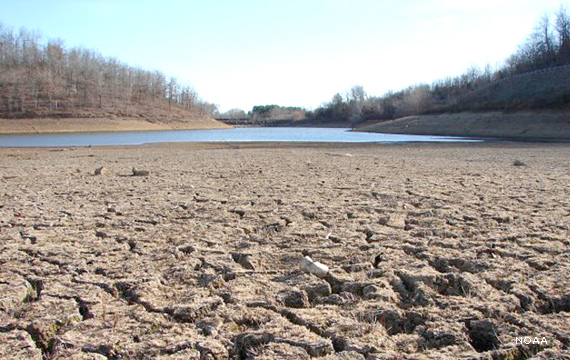 IT SEEMS LIKE I HAVE A PROPENSITY FOR SWIMMING UPSTREAM. I’ve gone against the current throughout my career, usually with my colleagues at NWF and with the support of people like you. I made up my mind long ago to fight doggedly against the powerful flow of human greed, which has taken such a heavy toll on wildlife and the natural world.

Today, no conflict requires more steadfast determination on our part than the fight to avoid the worst consequences of global climate change. Consider: Though not yet over, 2012 surely will be remembered as a year warming climate left its unmistakable footprint on North America and across the world. Scorching heat and extensive drought this summer set an unprecedented number of records. According to an analysis by NASA’s Goddard Institute for Space Studies, as of this writing, more than 40,000 daily U.S. heat records were broken in the first half of the year. We’ve had heat and drought before, but the past year, from July to July, was the warmest in this nation since record keeping began in 1895.

Parched lands and raging mega forest fires are not limited to the United States. The United Nations World Meteorological Organization reported in November 2011 that, according to data dating back to 1850, the planet’s “13 warmest years have all occurred in the 15 years between 1997 and 2011.” Russia is experiencing its worst drought and excessive heat in 40 years—conditions that have destroyed crops on about 20 percent of its tillable lands. Thirteen of China’s 22 provinces are struggling with water and food shortages, and last year the Chinese suffered through their worst drought in 50 years, with rainfall levels down 40 to 60 percent. The same is true for parts of Australia and both Koreas.

The Arctic region, meanwhile, is warming twice as fast as the average temperature globally. Greenland shed a 45-square-mile iceberg in mid-July and spilled a record 100 billion tons of ice and meltwater in 2011. Numerous wildlife species are suffering from the same severe droughts, overheated rivers and lakes, huge forest fires and heat waves.

With all of these planetary threats rolling out concurrently, Rex Tillerson, the CEO of ExxonMobil, would like us to believe that we can simply adapt to climate change. In a recent speech before the nonprofit Council on Foreign Relations, he acknowledged that burning oil, coal and natural gas for fuel is warming the planet, but he rejected peer-reviewed studies, sophisticated predictive climate models and science-based warnings about the need to curtail carbon pollution.

In a surge of hubris defying even the very laws of nature, Tillerson urged society to keep burning fossil fuels. “We’ll adapt,” he said. “It’s an engineering problem, and it has engineering solutions.” ExxonMobil and its merry band of carbon polluters are trying to convince us that they and their army of petroleum geologists and engineers have the planet’s energy problems under control. Don’t believe them.

Along with the coal industry, oil and gas interests have spent billions of dollars in advertising to mislead consumers. With unrestrained political spending stemming from a 2010 U.S. Supreme Court decision—in which the justices ruled that government cannot limit political expenditures by corporations—polluters also have enjoyed a restricted-access highway to policy makers. That access may explain why the U.S. House of Representatives passed anti-environmental bills on more than 280 occasions since 2011, threatening regulations that would have curbed dangerous carbon pollution and protect our air, water and other vital resources.

ExxonMobil and Tillerson are coming under increasing scrutiny as a result of a recently released book, Private Empire: ExxonMobil and American Power. Author Steve Coll details how ExxonMobil is manipulating the various branches of government, creating a pervasive and powerful axis of fossil-fuel interests. Tillerson dismisses such criticism and blames what he calls a “lazy” press, “illiterate” public and advocacy groups that are “manufacturers of fear” for the bad light placed on the oil industry.

Despite that assertion, a record 3 million Americans—including many of you—submitted comments in recent months urging EPA action to cut carbon pollution from new power plants.

It is our time to stand up against the polluters. We’ve waited too long to curb carbon pollution. All of nature, our children and their children will live with the consequences of inaction. The nation must move quickly to eliminate further emissions of heat-trapping gases, and we must hold our government officials accountable for their actions and inactions. Will you swim upstream with me?