News of the Wild: February/March 2013 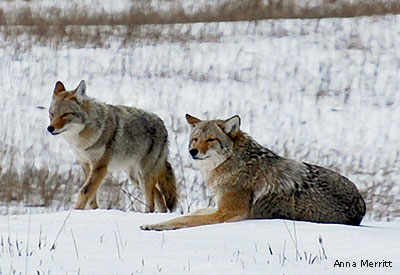 Chicago-area coyotes never cheat on their mates, according to a six-year study of 236 coyotes in the urban region, published recently in the Journal of Mammalogy. Researchers found no evidence that any of the animals had more than one mate, even though the coyotes lived in high-population densities and had plenty of food, conditions that often drive members of other canine species to stray.

“I was surprised we didn’t find any cheating going on,” said study coauthor Stanley Gehrt, a wildlife ecologist at Ohio State University. The coyotes’ loyalty to mates, by allowing them to partner in raising young, may be a key to their success in the Chicago area. “The male spends just as much time helping to raise those pups as the female does,” Gehrt says. A male coyote, he adds, “knows that every one of those pups is his offspring” and has a clear genetic stake in helping them survive. “We’ve been able to follow some of these alpha pairs through time, and we’ve had some of them stay together for up to 10 years,” Gehrt says. “They separate only upon the death of one of the individuals.” He doesn’t know if coyotes in other areas practice the same mate fidelity.