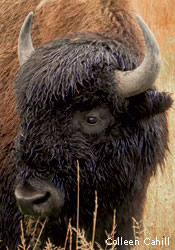 Throughout the United States, American Indians own and manage some 95 million acres of forest and desert, grassland and mountain—11 million acres more than the U.S. National Park Service administers. These extensive holdings make the tribes important partners in wildlife and habitat protection, and for the past three decades, NWF has worked with several of them on a wide range of projects.

Last winter, for example, NWF helped secure 61 genetically pure Yellowstone National Park bison for release on the Fort Peck Reservation, the northeastern Montana home of Sioux and Assiniboine Tribes. The result of 15 years of work with the InterTribal Bison Cooperative, the release is an important start to restoring a lost part of the tribes’ heritage. Other recent efforts in which NWF has collaborated with tribal peoples include:

• Working with the Northern Cheyenne and Crow tribal governments and members, NWF is helping the tribes protect their cultural, environmental and economic interests in southeastern Montana. Presently, the Federation is seeking protection for the Otter Creek and Tongue River valleys, which are important habitat for hundreds of wildlife species and are rich in Northern Cheyenne historical and archaeological resources, including burial sites, earth lodges and medicinal plants. Montana officials recently leased the valley’s minerals to Arch Coal, Inc., which plans to develop one of the nation’s largest coal strip mines there.

• In 2006, the Federation convened a climate summit with representatives from 55 Native American tribes—the first-ever event of its kind—to explore how their reservations, cultures and lives are being affected by global warming.

• The Federation is working with tribes to organize workshops and training that encourage development of clean energy, including solar, wind and geothermal sources, on Indian lands.

• NWF is enrolling tribal schools, such as the Southern Ute Indian Academy in Colorado and the Tohatchi School in New Mexico, in its Schoolyard Habitats® and Eco-Schools USA programs, which are designed to give students hands-on experience with habitat conservation, healthy living and energy efficiency.

• The Federation worked with tribes, including the Cheyenne River Sioux, to restore endangered black-footed ferrets to prairie habitat.

• NWF partnered with the Cocopah Indian Tribe to restore riparian habitat along 23 miles of the Lower Colorado River, including 12 miles within the Cocopah Reservation.

NWF’s work with Native American tribes on wildlife-conservation and clean-energy projects could not succeed without your support. In 2012 alone, Federation members contributed $140,000 to this effort. To learn more, visit www.nwf.org/triballands. 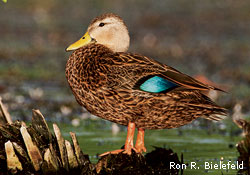 The Mississippi River Delta wetlands host as many as 10 million ducks and geese during winter and year-round are home to many regional species, including the rare mottled duck (right). The wetlands also generate more than $3 billion in recreational and commercial fishing revenue annually.

Yet since the 1930s, Mississippi River levees have cut off fresh water and sediment from reaching the region’s coastal marshes and cypress forests. Salt water now inundates the formerly brackish ecosystem and leads to the erosion of an area the size of a football field almost every hour.

The Vanishing Paradise campaign of NWF, its affiliate the Louisiana Wildlife Federation and Ducks Unlimited is stressing the need for state and federal agencies to divert sediment and fresh water of the Mississippi River back into the marsh and “restore the delta to a healthy, functioning ecosystem,” says Land Tawney, NWF senior manager for sportsmen leadership.

Vanishing Paradise recently recruited its first Conservation Pro Staff. As delta restoration ambassadors, these volunteer sportsmen and women will help with media outreach, organize events for hunters and anglers in their area and attend trade shows and other events, among other tasks. To find out more, go to vanishingparadise.org.


A Roadmap for Cover Crops

Cover crops, such as annual ryegrass and daikon radishes, are planted on farmland after commodity crops are harvested. They decrease soil erosion, improve yields, store carbon in soil, provide wildlife habitat and reduce fertilizer use, thereby improving water quality. Yet they are planted only on a small amount of U.S. farmland.

NWF is striving to have 10 million acres of cover crops planted in the Mississippi River Basin by 2015 and 100 million acres across the United States by 2025. To help achieve this goal, NWF’s new report Roadmap for Increased Cover Crop Adoption recommends: modifying public policies, developing and distributing information about how to effectively use cover crops and providing farmers greater access to needed technology and equipment.

NWF also is cultivating an advisory committee of farmers, academics and extension specialists to help support “cover crop champions,” farmers and others who will assist those who wish to plant cover crops. 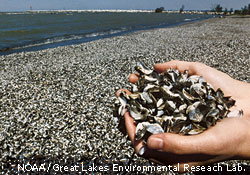 NWF has sued the New York State Department of Environmental Conservation for taking a u-turn on water protection. The state was going to require ship ballast water to be 100 times cleaner than the standards of the U.S. Environmental Protection Agency (EPA). Instead the state is now permitting ballast water to be released that contains an EPA-sanctioned concentration of living organisms.

While crossing the ocean, ships use ballast water for stability and then release it just prior to arriving in port and loading with cargo. Ships entering the Great Lakes must travel through New York waters and could be transporting invasive species. Aquatic invasives such as quagga and zebra mussels (left) cause more than $200 million per year in damages and control costs in the Great Lake region.

NWF is leading similar lawsuits against weak state ballast laws in Minnesota and Wisconsin. “It’s high time that the nation slams the door on ballast-water invaders,” said Marc Smith, senior policy manager with the NWF’s Great Lakes office. “We will not sit back and let states rubber-stamp the EPA’s flawed permit.” Go to www.nwf.org/ballastwater for more.

NWF will be holding its 77th annual meeting March 14 to 16 in Albuquerque, New Mexico. Visit www.nwf.org/annualmeeting for the latest meeting information or email events@nwf.org.

Getting 10 Million Kids Outside 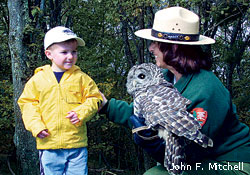 In 2012, NWF announced a three-year goal to inspire 10 million more children to explore, play and learn outdoors for at least 90 minutes per week. To achieve this unprecedented 10 Million Kids Outdoors goal, NWF is partnering with the major influencers of children’s time: parents and caregivers, policymakers and child-serving institutions, including schools and organizations such as the National Recreation and Park Association (NRPA).

NRPA has joined NWF’s efforts by calling upon all park and recreation agencies to pledge their support to the initiative and provide additional resources and materials that foster outdoor play and learning.

“With the largest amount of public green spaces in the nation, parks and recreation areas offer a unique opportunity to connect children to nature,” said Patrick Fitzgerald, NWF’s senior director of education management. “NRPA will be a valuable partner in helping us let kids know why it’s called the great outdoors.”

For more information about the 10 Million Kids Outdoors goal or to how to participate, visit www.nwf.org/10millionkids.

Spend March 18 to 24 “Branching Out for Wildlife” during NWF’s 75th Annual National Wildlife Week. In addition to offering fun educational materials for parents and teachers online, NWF is striving to give 75,000 trees to youth to plant at schools, parks and other public places across the United States. Download free activities and find out how you can sponsor a tree at www.nwf.org/wildlifeweek.

Students between the ages of 13 to 18 who are aspiring to be environmental reporters are invited to participate in the first Young Reporters for the Environment (YRE) USA writing competition this spring. YRE is an international Foundation for Environmental Education (FEE) program NWF is hosting in the United States.

Students individually or as a group are asked to submit: an article up to 1,000 words, a photo, a photo essay featuring up to 12 photos or a documentary video up to 3 minutes long covering an environmental issue in their local community. Entries must connect to a global perspective, include possible solutions and be disseminated to an appropriate target audience. First-place winners of this national competition will progress to the international level. The submission deadline is March 15.

“We hope that many youth will participate in the program, learning the valuable role environmental journalists play in informing the public about critical environmental issues and their solutions,” says NWF’s Kate Hofmann, coordinator of the YRE program.

Go to www.yre-usa.org for more information or send an e-mail to yre-usa@nwf.org.

Providing a Path to Nature 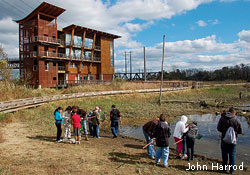 As part of the Children in Nature/No Child Left Inside Task Force, the Delaware Nature Society (DNS), an NWF state affiliate, and other partners recently answered the call of Delaware Governor Jack Markell to help draft a state action plan curtailing the growing trend of children spending little time outdoors. “Reconnecting children and their teachers and families to nature is necessary to grow healthy children who are able to achieve academic success,” says DNS Associate Director Helen Fischel.

DNS has been a leader in providing environmental education opportunities to families, classrooms and youth groups through several nature centers in the state, including the DuPont Environmental Education Center it manages (above, left). The center borders a wildlife refuge and the city of Wilmington, connecting urban families with hands-on nature experiences.

Download the state action plan www.destateparks.com/CIN and go to www.delawarenaturesociety.org to learn more.