NWF View: Wake Up! It’s Later Than It’s Ever Been 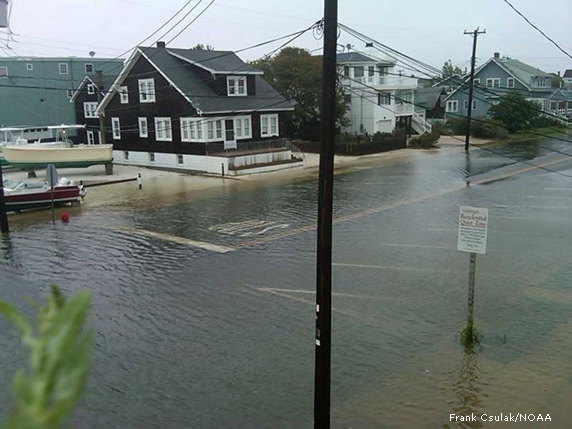 THE LATEST IN A SERIES OF UNPRECEDENTED WEATHER-RELATED TRAGEDIES, Hurricane Sandy has been called “Frankenstorm Sandy” for its massive size, loss of lives and property and horrific infrastructure damages. Catastrophic events like Sandy are demonstrating that there is an enormous price to pay for ignoring climate change. It also may have been the event that finally awakened mainstream media, Wall Street and many U.S. citizens to the dire consequences of climate change. It may be too late to make climate change disappear, but it’s not too late to act boldly and make a decisive difference for the future.

This period reminds me of a story I heard long ago about a small boy who went downstairs one Sunday morning while the rest of the family slept. The clock was striking 8, but he noticed that it was out of order. As it struck 9, 10, 11, 12, then 13 and 14, the youngster raced upstairs, yelling, “Wake up, quick! It’s later than it’s ever been!”

Clearly, years of ignored warnings have passed us by. I recently participated in a conference call organized by World Bank leaders, who released a study in November alerting us about trouble ahead. The report, Turn Down the Heat: Why a 4° C Warmer World Must be Avoided, “spells out what the world would be like if it warmed by 4 degrees Celsius, which is what scientists are nearly unanimously predicting by the end of the century, without serious policy changes.”

The report goes on to say, “The 4° C-scenarios are devastating: the inundation of coastal cities … ; unprecedented heat waves … ; substantially exacerbated water scarcity in many regions … ; and irreversible loss of biodiversity, including coral reef systems. And most importantly, a 4° C world is so different from the current one that it comes with high uncertainty and new risks that threaten our ability to anticipate and plan for future adaptation needs.”

Every 1-degree C rise in temperature equates to a nearly 2-degree F increase. Since Hurricane Sandy was in large part the result of warmer-than-normal ocean water caused by a 1-degree F rise in global temperature, imagine what will happen with a 7- to 8-degree F average increase. Because of the massive carbon pollution spewing into the atmosphere, the planet is entering into a more-aggressive climate paradigm scientists are calling the “anthropocene,” in which entire ecosystems will be disrupted and most forms of life will be threatened with extinction.

But the World Bank document, as with other reports, points out that the 4-degree C scenario can be avoided if we act boldly and quickly. The longer we wait, however, the more difficult the job becomes. “We have passed a critical threshold …,” begins a recent study from the auditing giant PricewaterhouseCoopers LLP. We must prepare for a warming world, it concludes, while also acting boldly to head off the types of catastrophic scenarios the World Bank lays out.

The PricewaterhouseCoopers study examines the goal agreed to by world leaders in recent climate treaties: preventing the planet from warming more than 2 degrees C. Achieving that target will “require unprecedented and sustained reductions” in the emissions of heat-trapping greenhouse gases such as carbon dioxide. To have a 50 percent chance of avoiding climate catastrophe, PricewaterhouseCoopers warns, the United States and other industrialized nations need a bold carbon-pollution-reduction program that cuts greenhouse-gas emissions in half in the next 20 years.

Developing nations also will need to significantly curb their booming emissions. Any plan achieving less will lead to ecological and societal disaster. For years, we have heard similar conclusions from prestigious institutions, yet the nation’s fossil-fuel interests with their massive advertising campaigns have dismissed these clear warnings, even suggesting that climate change is some kind of science conspiracy. Despite record low approval ratings of the U.S. Congress, we continue to reelect many intransigent politicians who remain under the thumb of dirty energy, refusing to acknowledge climate change and turn the corner with an effective clean-energy policy.

Have I lost hope that we will wake up and act? My enduring hope is in you, NWF members and supporters who care about wildlife and about our children’s future. Together, we must demand policies to stop carbon pollution before it stops us. But it is not enough to care; we must link our concern to each other and act collectively. After all, that is why conservationist Ding Darling created NWF. He knew that “a thousand stallions unconnected could not move a baby carriage.” We must work to move our wayward lawmakers to fast action. To learn how you can get involved, visit www.nwf.org.