Putting a Price on Nature 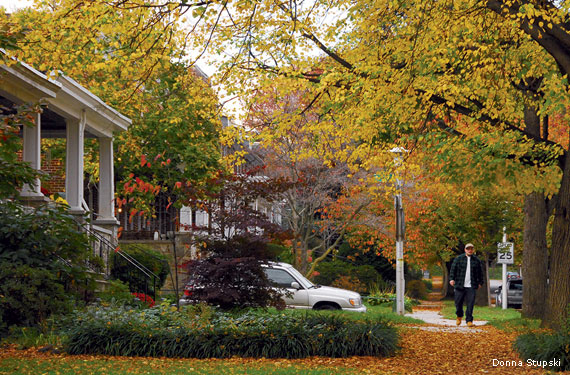 THE VALUE OF THE COUNTLESS GOODS AND SERVICES that nature provides us free of charge is astonishing, once you do the math. Consider the 2.8 million trees growing on the streets and in the parks of Baltimore, Maryland (above). According to the conservation group American Forests, the city’s trees store 527 tons of carbon every year, remove 269 tons of ground-level ozone and help cut air conditioning bills by $3.3 million a year.

Few Americans now take into account the value of these natural benefits, which range from water purification to flood control and climate regulation. But here and abroad a drive is under way to enter nature’s contributions onto the balance sheets important to business and government.

A central player in this effort is the Natural Capital Project, or NatCap, a partnership of conservation groups, the University of Minnesota and Stanford University, where the project is based. The program seeks to help decision makers see more clearly how paying to protect nature makes good financial sense. “The things we pay for are usually what we then think is valuable,” says Stanford biologist Heather Tallis, lead scientist with the project. “If we don’t pay for something, we don’t often think about it.”

The phrase that ecologists use to describe the lands, waters and species that contribute to national and international economies is “natural capital.” “A lot of people say it’s crass to slap a price tag on nature,” says Gretchen Daily, the Stanford ecologist who cofounded NatCap in 1996. “But this isn’t about reducing nature to one bottom line. It’s about being pragmatic.”

Some ecosystem goods and services are easier to quantify than others. For example, U.S. prescription drugs, which account for a $300-billion-a-year industry, are founded on nature. “About 120 of the top 150 prescription drugs trace their origin to natural products, mainly plants,” Daily says. “For things like this, people have a vague sense of their value because they’re traded in markets.” But we’re accustomed to thinking about much of the rest of the natural world—especially its two most important products, air and water—as inexhaustible and free.

“Of course, being free doesn’t mean they lack value,” says Bruce Stein, NWF director of climate adaptation. “The dollar value of ecosystem services may be hard to calculate, but we depend on the benefits they provide every day. You might say they are priceless.”

The concept of natural capital gained traction among policymakers in 2005 with the publication of the United Nations’ Millennium Ecosystem Assessment. Synthesizing the work of more than 1,000 scientists around the world, the report stresses that ecosystem services enable all human activity. Many of those services, the report warns, are being undercut by ill-advised development.

A celebrated early case of letting Mother Nature do what she does best involved New York City. In the 1990s, the city’s drinking water had started violating the U.S. Environmental Protection Agency’s water-quality standards because of sewage, pesticides and other pollutants in its upstate watershed. The city considered building a new downstream water-filtration plant at a cost of $6 billion to $8 billion, plus $300 million a year to operate. Instead, it opted to use rural land acquisitions and other measures to restore the natural watershed, which would filter out pollutants for less than a quarter as much money (see “How Much Is Clean Water Worth?,” National Wildlife, February/March 2005).

Too often, we notice nature’s largesse only after a calamity interferes with it, such as “colony collapse disorder,” which has devastated the imported European honeybees that U.S. farmers for years have used to pollinate their crops. In California, where $12 billion worth of crops each year rely on pollination, renting one hive can cost $100 or more. Yet according to a recent study at the University of California–Berkeley, local wild bees actually do more than a third of the pollinating—and they do it for free.

However, the Berkeley researchers discovered that wild bees depend on nearby ranchland, where they gather pollen and nectar from plants that blossom year-round. As these oak-dotted expanses give way to vineyards and housing developments, farmers have begun working with local cattle ranchers to conserve the latter’s bee-friendly grazing land. U.C.–Berkeley ecologist Claire Kremen, the study’s senior author, says, “All of a sudden, people started to pay attention and say, ‘Yeah, we do need these native insects.’”

Natural Capital Can Be a Hard Sell

Where the benefits of natural services are harder to pinpoint locally and slower to be felt—actions to help mitigate climate change, for instance—persuading people to invest in natural capital is harder. Sometimes a public campaign is needed.

A grass-roots campaign fueled the success of a reforestation project begun in 1989 on the east coast of Japan. For years, the fishery and oyster beds in and around Kesennuma Bay had been in decline. Scientists identified an unexpected culprit: a shortage of leaf litter along the once-forested edges of the Okawa River. Nutrients leaching from dead leaves had nourished plankton, which in turn helped fish and shellfish in the bay to thrive. Spurred by an ebullient oyster farmer named Shigeatsu Hatakeyama, fishermen and others began banding together each year to replant broadleaf trees along the riverbanks. The campaign, called Forests Are Lovers of the Sea, is now a popular annual event, involving poets, tourists and school groups. Prized oyster meat from the bay is once again on the plates of Japanese diners.

Despite such examples, the valuing of natural services probably wouldn’t be making much headway among U.S. businesses and landowners without federal rules such as those spelled out in the Clean Water Act and the Clean Air Act. “The private sector can be nimble and responsive,” Daily says, “but it’s unlikely to do anything until there’s a policy requirement or a threat of one.”

Those in the natural-capital community see their approach as a way for environmentalists to find common ground with hard-nosed economy-first types. “We can argue till we’re blue in the face over how much scenic beauty we need or how much saving a particular animal is worth,” Daily says, “but everybody can agree on the importance of clean drinking water and flood control.”

“A lot of environmental problems, like flooding, are only going to get worse with climate change,” says Bruce Stein, NWF director of climate adaptation. “The usual response to these problems is more public works: more seawalls, higher levees, bigger drainpipes.” The idea behind Nature Works, part of the NWF’s new Keep the Wild Alive campaign, is to lessen environmental risks to people and property by using natural solutions, like marshes and tree barriers. During the 2004 tsunami in Indonesia, Stein says, “deforested areas of the coast were hit much harder than were areas where mangrove forests still existed.” Reforestation is now part of Indonesia’s tsunami defense. Similarly, Nature Works is promoting restoration of wetlands and streamside forests in the United States as a means of reducing flood damage while at the same time providing wildlife habitat. For more information, visit www.nwf.org/climate-smart-communities.