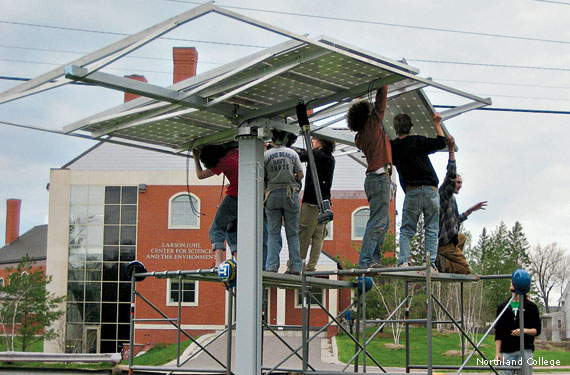 Education With a Green Calling

One of the Federation’s principles is that teaching students about the benefits and joys of nature can instill in them a desire to become life-long environmental stewards. Since 1989, NWF’s Campus Ecology® program has provided higher education institutions and partners the resources they need to incorporate environmental education into curricula and empower college students to make their campuses and communities more sustainable while pursuing green careers. Following are some highlighted Campus Ecology initiatives:

• For seven years, NWF has hosted national competitions to encourage students to create innovative energy-saving solutions on their campuses. In 2012, 250,000 students in 1,000 residences at 100 campuses competed in the Campus Conservation Nationals, hosted in partnership with Lucid Design Group. This saved 1.7 million kilowatt-hours of electricity and cut 2.6 million pounds of carbon dioxide from the atmosphere.

• Since 2000, NWF has presented more than 150 students with Campus Ecology Fellowships to lead projects that make their campuses or communities more sustainable and confront global warming. More than 2.5 million students, faculty, staff and community members have participated in these projects.

• NWF’s Regional Campus Sustainability Networks help students, staff and faculty at about 110 institutions each year connect so they can share what they have learned about teaching and practicing sustainability on their campuses and in their communities as well as preparing students for green careers. The networks also collaborate on national campaigns ranging from raising state renewable energy standards to countering dirty-energy projects.

• NWF and Jobs for the Future offer the Greenforce Initiative at 100 community colleges in six states. This initiative provides students with grants, networking opportunities, webinars and access to community college faculty as well as local and national employers who are either providing green jobs or are making traditional businesses greener by reducing material waste and energy use.

• NWF offers an abundance of online resources for students, colleges and universities. These include an interactive U.S. map with links to campus sustainability case studies that feature best practices from 800 Canadian and U.S. schools; a webinar series covering topics such as implementing energy-efficiency projects (such as installing solar panels at Northland College, above); and nationally recognized reports, including A Student’s Guide to How Corporate Oil, Gas and Coal Money Influences U.S. Energy Policy.

Your Dollars At Work

In the past year alone, your contributions of more than $126,000 have helped this program create a legion of wildlife ambassadors who are dedicated to conserving wildlife, now and well into the future. For more, go to www.nwf.org/campus-ecology. 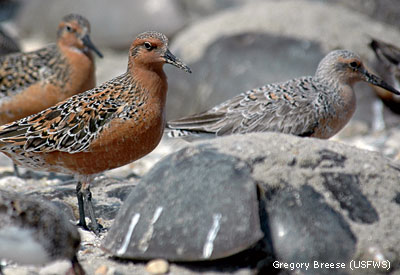 This last October, Hurricane Sandy killed more than 200 people and caused more than $70 billion in property damage on the East Coast. It also wiped out great swaths of sandy seashore that were prime nesting habitat for species such as the horseshoe crab (left). Their eggs feed thousands of migrating shorebirds each spring, including the declining red knot (left).

This spring, NWF brought together volunteers to help replant beach grasses at New York’s Gateway National Recreation Area, a habitat for horseshoe crabs. NWF affiliate New Jersey Audubon and its partners are also working to clear concrete debris from and restore sand to Moore’s Beach in New Jersey as another nesting location for horseshoe crabs.

To help ensure “such investments aren’t lost with the next storm,” says George Gay, a senior manager of NWF’s Northeast Regional Center, NWF staff joined reinsurance company representatives this past spring to talk with New Jersey and New York policymakers about extreme-weather strategies such as restoring beaches and wetlands to serve as natural storm barriers. Go to www.nwf.org/northeast-coasts.

Finding Balance in the Arctic Working with 75 sportsmen groups and others, NWF and five of its state affiliates gathered more than 25,000 comments in support of a recently finalized U.S. Department of the Interior management plan for the National Petroleum Reserve–Alaska. The plan sets aside 11 million acres for wildlife while allowing oil and gas companies to drill in other areas of the reserve.

At 23 million acres, the National Petroleum Reserve, also called the Western Arctic Reserve, is the largest tract of U.S. public land. The plan protects some critical wildlife habitat, including Teshekpuk Lake, an area that supports thousands of migratory birds and is a calving ground for 45,000 caribou. On Alaska’s north coast, the reserve is also home to polar bears, seals as well as beluga and bowhead whales.

“Sportsmen and other conservationists made their voices heard, and the Bureau of Land Management responded with a plan that carefully balances oil and gas leasing with wildlife conservation,” says Adam Kolton, executive director of NWF’s National Advocacy Center. Learn more at www.nwf.org/Arctic.

The Coalition for the Delaware River Watershed—made up of NWF, its state affiliates the Delaware Nature Society, New Jersey Audubon and PennFuture, and 26 other organizations—is hosting its first conference, “A Watershed United,” on June 10 and 11 to bring attention to the need for unified management of this major U.S. water source.

The Delaware River basin stretches more than 330 miles from New York to Pennsylvania and provides an estimated $26 billion in economic benefits. Yet it receives little federal funding to address the problems attacking different points along its river. For example, New York City is draining water from the river’s northern half while industry and agriculture are polluting its southern, killing shad, oysters, mussels and other aquatic species.

The coalition is supporting the bipartisan Delaware River Basin Conservation Act of 2013, which reallocates current federal funding to clean water protections of the river and pushes for coordinated management of its watershed.

“A united effort is needed to keep the watershed healthy and protect clean water for the more than 15 million people who rely on it,” says Grant La Rouche, NWF’s Mid-Atlantic regional representative. To find out more, go to www.facebook.com/DelawareRiverCoalition.

At NWF’s 77th annual meeting in March, the Conservation Council for Hawai‘i was named Affiliate of the Year for its outstanding efforts to recover and protect endangered Hawaiian plants and animals. Phil Taunton of Kansas is NWF’s Volunteer of the Year, chosen for his enthusiastic leadership as an outdoor educator. Learn more at www.nwf.org/annualmeetingawards.

Salmon and orca continue to decline in Washington’s Puget Sound Washington State’s Puget Sound region is home to a bounty of wildlife and 4 million people. However during the past century, development and agriculture have reduced the region’s floodplain habitat by 90 percent, leading to a 93 percent decline in its Chinook salmon and more than a 50 percent decline in the orcas that feed on them. Since 1990, 15 major flood disasters have cost 58 lives and more than $1.37 billion in damages.

NWF’s new report, Changing Course: Why Protecting Floodplains is Good for People and Wildlife, shows how functioning floodplain ecosystems reduce flooding, improve water quality and provide essential wildlife habitat. In 2004, NWF successfully sued the Federal Emergency Management Agency (FEMA), which led to the agency being required to incorporate salmon habitat protections into its Puget Sound floodplain management criteria by 2011. Yet it has failed to do so. NWF’s report recommends stopping floodplain development that is harmful to wildlife habitat, buying frequently flooded properties and setting back or removing levees.

“Protecting and restoring floodplains are some of the most important things we can do to recover imperiled salmon and reduce our risk of devastating floods,” says Dan Siemann, NWF’s Pacific Region senior policy specialist. Visit www.nwf.org/wafloodplains for more information.

NWF certified Florida’s Broward County School District, the sixth largest in the United States, as the nation’s first School District Wildlife Habitat site for its comprehensive approach to environmental education and its use of outdoor learning spaces. More than 100 of the district’s schools have Schoolyard Habitats® sites.

For the past 10 years, the Federation has worked with the Houston Independent School District (HISD) to improve science and math skills through hands-on experiences with nature. Last fall, NWF’s Eco-Schools USA program entered into a formal partnership with HISD, the largest school district in the state. This agreement gives the district a holistic approach to incorporating environmental education into curricula, including ways to increase the number of its Schoolyard Habitats® sites and reduce energy use through HISD’s annual Green School Challenge.

This partnership was a prelude to Texas launching a statewide environmental literacy plan in January, which NWF and more than 30 other nonprofit organizations, government agencies and others supported. The plan provides educators with a road map to community connections, technology, funding sources and guidelines so they can teach natural resource stewardship through outdoor experiences and informal educational settings.

Marya Fowler, an NWF senior educator, says: “Every Texas child deserves to experience the natural world. This state’s new environmental literacy plan and the partnership with the Eco-Schools USA program help make that possible.” For more information, go to www.eco-schoolsusa.org. Virginia lawmakers have decided to maintain a 31-year state ban on uranium mining, a long-awaited victory for the “Keep the Ban” coalition, which NWF affiliate Virginia Conservation Network (VCN) led with more than 40 environmental organizations and local governments.

Virginia Uranium, Inc. wished to mine uranium from southern Virginia for use as fuel in nuclear power reactors. However, a 2012 National Research Council report concludes that this mining would expose miners and residents to radioactive materials and that natural disasters could cause toxic chemicals to leak from mining waste disposal sites and into waterways such as the Roanoke River (left).

Economic studies also show that the cost of operating the mine could outweigh the financial gain from the mine’s “yellowcake,” which would have to be shipped out of state for processing into usable uranium.

The coalition collected more than 18,000 signatures opposing the mine. “The people in this region have spoken,” says VCN Executive Director Nathan Lott. “This is not worth the risk.” Go to www.keeptheban.org. 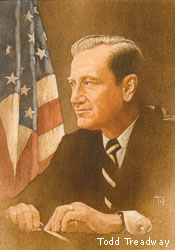 Since 1963, NWF has honored more than 30 outstanding leaders in conservation by inducting them into its Conservation Hall of Fame®. Members include such legends as Rachel Carson, Jay N. “Ding” Darling and Aldo Leopold.

This year, NWF’s Board of Directors inducted Russell E. Train (portrait, right), who died on September 17, 2012, at the age of 92. Among Train’s achievements were to serve as the first chairman of the White House Council on Environmental Quality and administrator of the U.S. Environmental Protection Agency. During his tenure at these agencies, Train help craft some key U.S. environmental laws, including the National Environmental Policy Act of 1969, which requires environmental impact assessments prior to federal projects being approved, and the Coastal Zone Management Act of 1972, which protects wetlands, estuaries, beaches and coral reefs. He also was later president of the World Wildlife Fund.

Converting your home to clean solar energy is an effective way to reduce your carbon footprint. NWF has partnered with Sungevity to offer a solar-lease program that allows energy-conscious consumers to switch to solar without the upfront cost. Plus, you’ll receive a $750 credit and Sungevity will donate $750 to NWF. Go to www.sungevity.com/nwf.