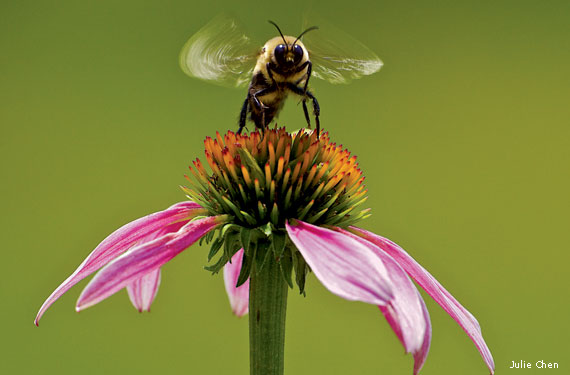 HOW DOES A BUMBLEBEE lift its big body into the air with comparatively small wings? “Instead of the aerodynamic finesse found in most other insects, bumblebees have adopted a brute-force approach,” report University of Oxford scientists, whose recent research uncovered some of the secrets of bumblebee flight. Beating 130 times or more per second, the insect’s left and right wings flap independently, the scientists found, and are powered by large flight muscles that take up most of the bee’s thorax, or midsection. The system is fueled by regular doses of energy-rich nectar that the bee acquires while pollinating plants.

Photographing the creature in flight is no simple task, however. Julie Chen discovered that firsthand while making this image of a male bumblebee buzzing away from a purple coneflower in her Tennessee backyard on a hot July day. “I focused my equipment on the flower and used a remote shutter and didn’t know what to expect,” says Chen, who took more than 300 photos during a two-hour period. “I only discovered this shot after I went inside and loaded all the images into my computer.”

Experts estimate that bumblebees and other U.S. native bee species, many of which are declining, perform as much as $3 billion worth of pollination services annually in this country alone—a feat worth celebrating during National Pollinator Week, June 17 to 23.

Find out how you can create an NWF Certified Wildlife Habitat® site!