From saving endangered species to creating wildlife habitat, NWF is making a difference 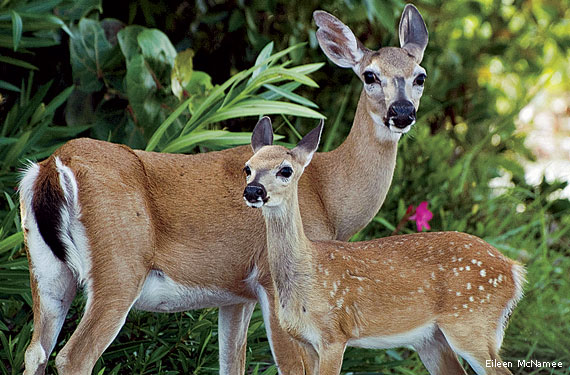 The Federation employs several strategies to aid wildlife heading down the path to possible extinction. It continuously defends the U.S. Endangered Species Act, which protects more than 1,400 threatened and endangered plants and animals across the nation. NWF also collaborates with federal and state agencies, private landowners, businesses and communities on wildlife-habitat– saving initiatives not only to assist species in peril but also to prevent others from becoming at risk.

Following are some ways NWF, with your support, has helped vulnerable wildlife.

• Since the 1990s, the Federation has been working to protect Florida’s key deer (above), sea turtles, Pacific salmon, orcas and other endangered animals from harmful development subsidized by federal flood insurance. NWF’s court victories on behalf of these species have protected valuable habitat and have led to important reforms of this insurance program.

• NWF has helped threatened grizzly bears in the Greater Yellowstone Area recover by working with state and federal agencies to protect bear habitat and reduce their mortality. For the past decade, NWF has eliminated conflicts between grizzlies and livestock by retiring grazing allotments on more than 600,000 acres adjacent to Yellowstone National Park.

• Since the 1970s, NWF has protected and restored thousands of acres of habitat along Nebraska’s Platte River, in part by establishing the Crane Trust for endangered whooping cranes and other migratory birds. For more than a decade, NWF also has fought to ensure adequate water flow to the estuary supporting Texas’s Aransas National Wildlife Refuge, vital migratory bird habitat. 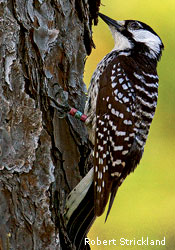 • Since 2007, with support from Alabama Power and Southern Company through their National Fish and Wildlife Foundation partnership, NWF and its affiliate the Alabama Wildlife Federation helped landowners restore longleaf pine trees on more than 9,000 acres in the Southeast. Only about 3 percent of these forests remain, yet they are home to animals such as endangered red-cockaded woodpeckers (right) and threatened gopher tortoises.

• NWF has partnered with the Cocopah Indian Tribe since 2002 to restore riparian habitat along 23 miles of the Lower Colorado River in Arizona, including 100 acres on the Cocopah Reservation. This is a vital migratory flyway for more than 120 species of waterfowl as well as wetland and neotropical birds such as the endangered southwestern willow flycatcher.

• The Federation and its partners achieved a milestone last year in their efforts to protect critically endangered right whales: crafting a landmark agreement with developers of Atlantic offshore wind farms that minimizes noise impacts from marine exploratory activities and reduces vessel speeds during whale migrations.

“For the Federation and its partners, there is nothing more gratifying than to know that we are helping keep endangered and threatened species around for future generations,” says John Kostyack, NWF’s vice president for wildlife conservation.

To learn more about NWF’s work on behalf of these species, go to www.nwf.org/endangered.

Don’t miss the opportunity to be among this year’s heroes of wildlife conservation while supporting NWF’s work: Attend the National Conservation Achievement Awards Gala, to be held April 30 in Washington, D.C. Among the award recipients will be leading scientist David Suzuki and communications expert Rue Mapp. Go to www.nwf.org/connies to learn more and buy tickets.

Six months after the White House announced its Climate Action Plan, NWF issued a report card that grades the Obama administration’s progress in five key areas from “poor” to “great.” It also makes recommendations for areas that are in need of improvement and includes five topics the plan does not cover.

For example, the report card shows that the administration has taken important steps toward limiting industrial carbon pollution and developing alternative energy sources such as offshore wind. However, it also shows that the administration needs to do more to protect U.S. public forests, wetlands and grasslands, which can sequester carbon, from being converted into cropland or mined for coal, oil or natural gas. In addition, the United States could be a stronger leader in international policies to fight global warming and educating about energy alternatives at home. 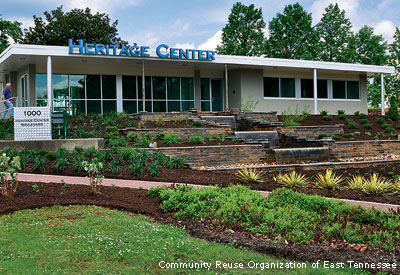 Last fall, NWF certified more than 25 acres of the former Manhattan Project site in Oak Ridge, Tennessee, as wildlife habitat. This Heritage Center Greenway (left) is on the former site of a mile-long building where uranium was enriched to create atomic weapons before shutting down in 1983.

Since 1995, the U.S. Department of Energy has been cleaning up the site, removing more than 1 million pounds of low-level radioactive waste. The Community Reuse Organization of East Tennessee (CROET) is redeveloping 1,200 acres of the site, on which it built an industrial park surrounded by natural areas. The park features a public greenway with 2 miles of trails, meadows, a pond and native trees that provide habitat for more than 200 bird species, including nesting pairs of bald eagles and ospreys.

CROET’s President and Chief Executive Officer Lawrence Young says, “We view it as an absolute asset. Areas that grow native plants and support wildlife attract people and businesses. They also save money.” About 100 acres that were previously mowed and fertilized have been restored to self-sustaining native grass meadows.

Go to www.nwf.org/nwfgarden to find out how your community or business can create its own wildlife habitat.

Hands-On Education: Growing Stewards for the Chesapeake
Delaware students learn how to take care of their watershed 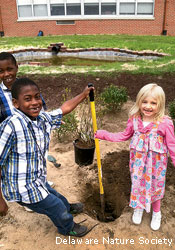 Students at four elementary schools in Delaware’s Seaford School District are learning how to help take care of the Chesapeake Bay watershed, thanks to a three-year collaboration between NWF and its state affiliate the Delaware Nature Society.

Funded through the National Oceanic and Atmospheric Administration Chesapeake Bay Watershed Education and Training program and other organizations, the schools are initiating environmental literacy programs, providing their students meaningful outdoor experiences and installing NWF certified Schoolyard Habitats® designed to encourage watershed stewardship. For example, a garden planted at Frederick Douglass Elementary (right) traps rainwater that otherwise would have washed pollutants such as trash and fertilizer into the Chesapeake.

“Teaching students to be stewards of their watershed is essential for its health as well as theirs,” says Jen Mihills, NWF’s Mid-Atlantic regional representative. Go to www.delawarenaturesociety.org to learn more about this affiliate’s work.

New York City’s Department of Education (DOE) has presented NWF’s Eco-Schools USA with a $20,000 grant to be divided equally this spring among four schools that demonstrate an outstanding commitment to environmental stewardship and have obtained the program’s top Green Flag award status. The grant is part of the DOE’s new partnership with Eco-Schools, initiated last year to promote sustainability in New York City schools.

With more than 1.1 million students from diverse backgrounds, New York City has the nation’s largest public school system. Eco-Schools offers resources to teachers and students in kindergarten through 12th grade so they can reduce waste, conserve water and energy, increase environmental awareness and
enhance academic achievement through creative projects such as outdoor classrooms. NWF has introduced this program to more than 1,500 DOE sustainability coordinators—teachers who are implementing environmental stewardship initiatives in their schools.

“New York City has made a serious commitment to making its schools greener and more sustainable and can serve as a model for other cities,” says Kevin Coyle, NWF’s vice president of education.

NWF members are invited to attend the Federation’s 78th Annual Meeting, “Water: It Connects Us All,” to be held May 1 to 3 near the historic Inner Harbor of Baltimore, Maryland. Various sessions, field trips and networking opportunities will cover how we can best conserve one of our nation’s most precious resources: water. Go to www.nwf.org/annualmeeting or email events@nwf.org to find out more.