Your sports team mascot may be fighting for survival, and not just during March Madness 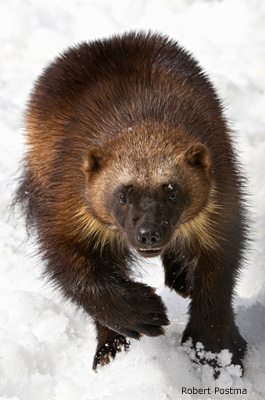 WHEN YOU ARE ROOTING FOR YOUR FAVORITE college sports teams this year, you might want to throw in a cheer of support for the teams’ mascots, as many of the species the mascots represent are being affected by climate change. NWF's new report Mascot Madness: How Climate Change is Hurting School Spirit says that "many of the plants and animals that inspired our favorite teams’ names and mascots are facing a losing streak."

From the Colorado State University Rams to the University of Maryland Terrapins, climate change is quickly becoming the toughest opponent to the long-term survival of wildlife. Climate change impacts like sea level rise, extreme droughts and storms, warming temperatures, and melting snowpack are altering habitats, putting wildlife at risk. For instance, the deep, continuous snow cover that wolverines (left)—University of Michigan’s mascot—need for their dens is more fragmented and melting sooner in much of the animals' range.

The report also points to some ways that we can all be on the same team and help many species in the battle to survive in a warming climate. As Claudia Malloy, NWF’s senior director of national outreach, says, “In the fight against climate change, none of us can afford to be benchwarmers.”

To download the full report and to find out how your favorite mascots are fairing in a changing climate as well as how you can help, go to www.nwf.org/mascots.