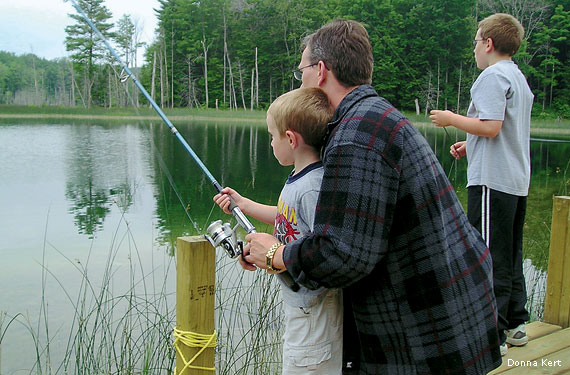 EXPERTS WIDELY AGREE that many of today's children are so hooked on television, computers and video games that they’ve lost touch with the natural world. Conservationists, hunters and anglers complain that kids and many adults would rather spend time on Facebook or a gaming console than hiking the woods or learning about the plants and animals in their backyards. This loss of interest in the outdoors could have critical effects. Studies show that people value their natural heritage more if they get a stake in it as children through hands-on activities at facilities such as local parks and schools.

To build a stronger constituency for wildlife, NWF is turning to the very technologies that seem to keep people indoors and is using them to foster an online community that revolves around connecting kids with wildlife. “We are trying to ride the current groundswell of interest in social media and other technologies that allow people to get the things they need from each other instead of from companies,” says Becky Lentz, director of education and conservation programs at NWF’s Great Lakes Regional Center in Ann Arbor, Michigan.

Last summer, she and Julia Liljegren, manager for regional education advocacy at the center, kicked off Wildlife Nation™, an online and on-the-ground network designed to help adults keep the wild alive in kids and their communities. They hope the network soon will link several million like-minded parents, guardians, teachers and others in a nationwide community that allows them to provide advice and encouragement to one another in the arena of outdoor activities.

“It’s about making a space where people can connect and become part of something bigger and more powerful than themselves, and today the best way is through social media,” Lentz says. “We want people to have a sense of belonging and camaraderie in shaping outdoor experiences and lore about wildlife while helping to create the next generation of conservationists.”

Carla Brown, NWF’s senior manager for online production, says prying people away from their couches is hard because “face it, video games are awesome. And it’s not just kids who play them.” Plus, she adds, “There’s the factor of kids not wanting to go outside, but there’s also the problem of parents who are afraid to go outside or afraid they won’t be able to answer kids’ questions.” However, if adults and children can use their ubiquitous technology to connect with people who have the answers, she thinks they’ll be less fearful and more appreciative of the natural world. 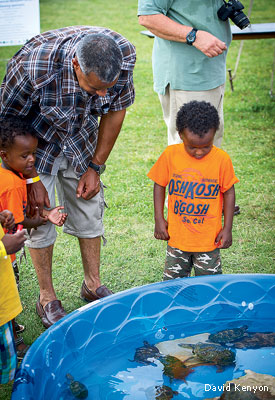 Wildlife Nation encompasses not only individuals and teams but also families, schools, corporations and other entities. Members can choose several ways to participate, ranging from fishing and other individual outdoor activities to NWF events and efforts such as the Great American Backyard Campout®, during which thousands of parents and kids across the nation join in a massive campout each June; Trees for Wildlife™, an NWF program that has resulted in the planting of tens of thousands of trees since 2009; or various Federation habitat-improvement programs that help schools, businesses, individuals and even cities enhance their land for wildlife.

“Wildlife Nation marries the power of online social trends with on-the-ground actions by those who can best change kids’ daily lives—their parents and other adults in their communities,” Liljegren says. “It offers access to information anywhere, anytime and leverages people’s innate desire to share what they are doing, enabling Wildlife Nation to self expand.”

Lentz and Liljegren initially used “seed teams” in Michigan, Wisconsin, Vermont, Ohio and Virginia to test and find ways to grow Wildlife Nation. Each team acted on its own to determine the activities in which it wanted to engage. Teams then shared their real-world experiences on Wildlife Nation via computer, cell phone or tablet.

NWF offers opportunities for teams to get outside with kids and also creates connections among seed teams in different parts of the country, allowing them to combine their know-how—everything from tips on fishing to using social media to foster the next generation of wildlife stewards. Although the teams are NWF facilitated, Wildlife Nation belongs to its members and provides easy and regular access to nature experts and other resources. One of the 15 Wildlife Nation seed teams was the Leslie Science and Nature Center in Ann Arbor. Its Raptor Program Director Francie Krawcke says, “We can use the expertise of the NWF to connect with other people who care about the things we do.”

Combining Online Activities with On-the-Ground Experiences
When Lisa Lennon from the Milwaukee, Wisconsin, chapter of the Holistic Moms Network set up her seed team, the only NWF requirements were that it be “organic and concentrate on getting kids outside. We already do that, so I liked the idea of helping other people do it.” She adds, “We’ll put pictures and videos from our activities on the website, and we’d love to have other people contact us to get involved. We’re always looking for new members and new energy.”

Brooklyn Centre also is home to the Cleveland Zoo, located in a ravine that was a glacial riverbed 10,000 years ago. A project in that ravine lets kids see how something they do by Lake Erie can influence the survival of polar bears in the Arctic hundreds of miles to the north. “The zoo helped us build a Polar Plot, where we put in plants to create carbon-offsets,” says Gloria Ferris, a member of the Brooklyn Centre Naturalists and a Wildlife Nation seed-team leader. “We can show firsthand how green plants here can [ameliorate] the greenhouse gases that affect polar bear habitat.”

Wildlife Nation “offers a real opportunity to have conversations with our members and supporters,” says Allison Morris, who also works at the Leslie Science and Nature Center. “We think this is a good way to reach parents and kids, single adults and older teens. A lot of people think, ‘I’d like to go for a walk in the woods, but I don’t want to go for a walk in the woods alone.’ We’ll offer a chance to meet other people and learn the very basics, like how do I find the trailhead?”