News of the Wild: Crocodiles

Crocodiles and alligators use twigs to bait birds 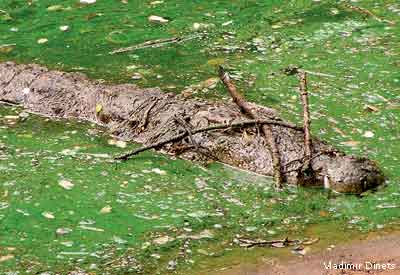 ALLIGATORS AND CROCODILES may be engaging in a cold-blooded ploy for luring birds into the deadly traps of serrated jaws. Vladimir Dinets, an assistant professor of psychology at the University of Tennessee–Knoxville, and his colleagues report in a recent issue of Ethology, Ecology & Evolution that American alligators and Asian mugger crocodiles (left) use twigs and sticks to attract birds, particularly during nesting season, when the birds are looking for building material.

Dinets, author of a new book about crocodilians, Dragon Songs, is the first researcher to document tool use by a reptile. He first observed the behavior in 2007 when he spotted muggers lying still for hours along the edge of a pond in India with small sticks or twigs positioned across their snouts. If a nesting bird came to take a stick, the croc would attack. When Dinets observed American alligators at four Louisiana sites, he found that alligators living near bird colonies displayed sticks on their snouts significantly more often during bird-nesting season.

“This study changes the way crocodilians have historically been viewed,” Dinets says. “Their behavior can be more complex than previously thought.”