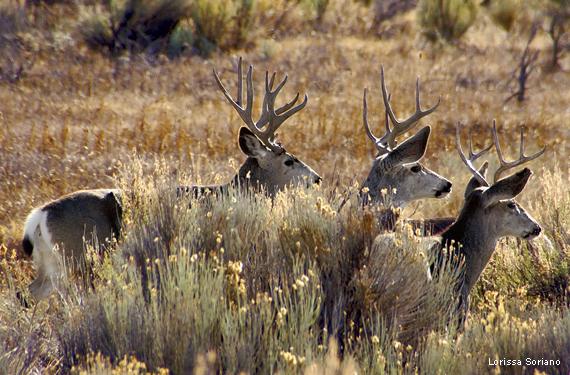 • NWF is helping reduce oil and gas development impacts on public lands. These fuels contribute to carbon pollution, and their extraction processes can contaminate air and water and fracture wildlife habitat. In 2013, for example, NWF helped stop a Bureau of Land Management plan, ensuring that more than 1.2 million acres of mule deer (above), pronghorn and sage grouse habitat in Colorado, Utah and Wyoming would be closed to oil shale drilling and mining.

• During the past two years alone, pipelines transporting thick tar sands oil have broken in Arkansas, Michigan and Montana, releasing toxic oil that killed wildlife and polluted rivers and a wetland. NWF is striving to block new tar sands pipelines such as Keystone XL, proposed to run from Canada through the central United States to Texas, as well as others slated for New England and the Great Lakes.

• Working with residents of Montana, Washington and Oregon as well as members of the Lummi Nation, NWF helped stop three of six ports that mining companies have proposed to build on the Pacific Coast so they can ship low-grade coal to China. Rail cars would carry this dusty coal across public and private lands, potentially polluting critical habitat for wildlife such as salmon, an essential food for Puget Sound orcas.

• For the past three years, NWF has pushed the U.S. Environmental Agency (EPA) to propose the first national limits on carbon pollution emitted from electric power plants. The agency now has proposed that new plants must emit at least 60 percent less carbon than existing plants and that currently operating plants should reduce their carbon pollution 30 percent by 2030.

• The Federation promotes renewable energy use through partnerships and initiatives on tribal, public and private lands. One such program provided funding and other support for the past five years to Northern Cheyenne Tribe members (right) so they could learn how to build and install solar heaters and electric systems. 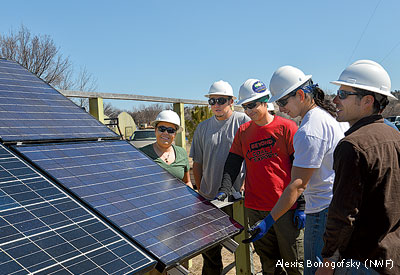 “NWF is changing the energy landscape,” says Felice Stadler, senior director of NWF’s climate and energy program. “Clean, responsible energy is essential for a healthy environment, not only for wildlife but for ourselves.”

Getting a Jump On Climate Change 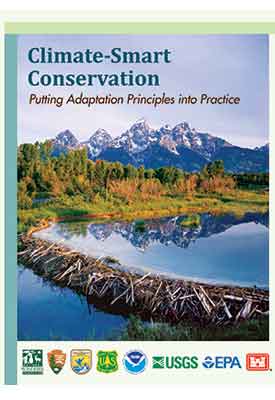 NWF has released Climate-Smart Conservation: Putting Adaptation Principles into Practice, a guide that offers natural resource managers and conservationists practical ways to develop actions that enhance ecosystems’ resilience to climate change. The publication provides managers a process to prepare for and address the impacts of a changing climate, from assessing wildlife vulnerability through implementing conservation strategies.

“The intent of the guide is to apply the principles of adaptation on the ground,” explains NWF’s Naomi Edelson, one of the publication’s editors. “It helps managers develop context-specific responses appropriate for their particular situations,” says Bruce Stein, director of NWF’s climate adaptation program and lead editor of the guide. “It is the distinction between following a recipe and learning how to cook.”

The publication was developed by a coalition of federal and state agencies and nonprofit organizations, many of which are now using it in their resource planning. The U.S. Fish and Wildlife Service, one of the collaborating agencies, and NWF are also hosting a training course based on the guide for conservation professionals. To download the complete guide, go to www.nwf.org/ClimateSmartGuide.

NWF presented its Affiliate of the Year award to the Prairie Rivers Network in Champaign, Illinois, for its work to protect regional waters from urban and agricultural pollution as well as invasive aquatic species. Each year, NWF recognizes one of its 49 state affiliates for its conservation accomplishments and collaborative efforts. Learn more about this affiliate at www.prairierivers.org.

Great Lakes healthier thanks to more than 100 restoration projects 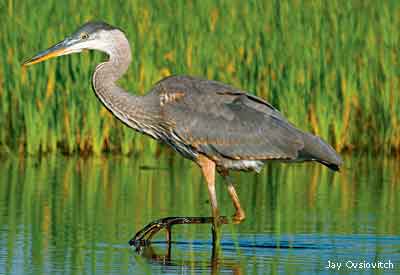 The Healing Our Waters-Great Lakes Coalition, for which NWF serves as co-chair, will celebrate completion of more than 100 projects at its upcoming 10th annual conference, to be held September 9 to 11 in Grand Rapids, Michigan.

The coalition helped win funding for more than 2,000 projects to restore habitat, clean up urban and agricultural pollution and fight invasive species such as Asian carp in the Great Lakes region during the past five years. These projects include removing tons of factory and sawmill wood, sawdust and concrete dumped on nearly 800 acres of coastal wetlands along Michigan’s Muskegon Lake and toxic sediments along 5 miles of Ohio’s Ottawa River; reverting nearly 200 acres of farmland along Lake Erie to vital wetlands for birds (such as this great blue heron, left) and other wildlife; and rearing and releasing 1,700 sturgeon into the lakes to help restore depleted native populations.

“Restoration projects are producing results for the Great Lakes and the wildlife and people who depend on them,” says Coalition Director NWF’s Todd Ambs. “And we will continue to stand up for these iconic waters.”

Details of Great Lakes restoration projects are featured on the coalition’s interactive map at www.healthylakes.org/map. 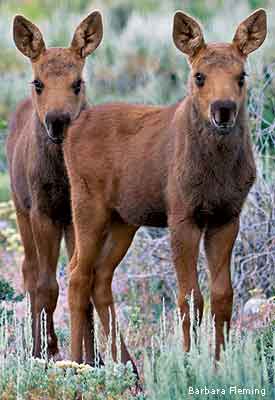 In May, NWF released Wildlife Legacy: Climate Change and the Next Generation of Wildlife, a report detailing how a changing environment threatens the survival of 15 animal species. For example, rising temperatures are leading to booming tick populations that are feasting on moose (right) and weakening them, even through winter. Warming marine waters have also displaced fish populations, and with less herring to eat, fewer pufflings (young puffins) are surviving. Sea-level rise could flood some Atlantic beaches up to 80 percent in this century, devastating sea turtle-nesting habitat.

NWF has joined a coalition of conservation organizations to add a Clean Water Wildlife and Parks Amendment to North Dakota’s November state ballot. This initiative would dedicate 5 percent of the existing state oil and gas extraction tax to a fund for conservation projects such as restoring wetlands and grasslands and creating new parks. Go to www.cleanwaterwildlifeparks.org for more.