Restoring Soils to Protect Our Future 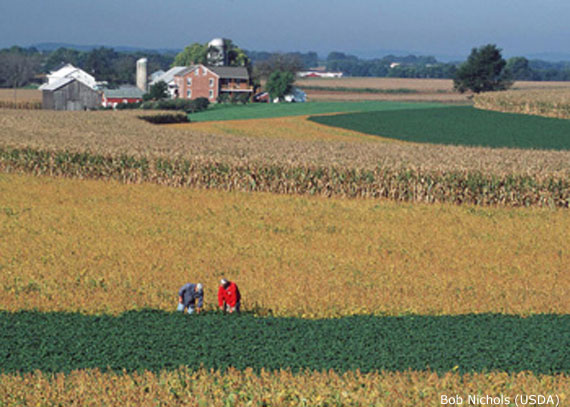 PRESIDENT ROOSEVELT knew what he was talking about when he issued that urgent warning to the nation’s governors in the mid-1930s. Prolonged drought and fierce dust storms had swept massive clouds of dirt east from Midwestern fields, dumping copious amounts of topsoil more than 300 miles into the Atlantic Ocean and raining dust on the nation’s capital in 1934 and again in 1935. The second of those big dust storms spurred the U.S. Congress to pass the Soil Conservation Act, which the president signed into law on April 27, 1935.

Since then, farmers have learned a lot about managing soils better to produce crops for food and fuel. Federal conservation programs have helped them adopt practices and make investments to retain soils and improve downstream water quality. Despite those gains, however, agricultural runoff remains the dominant source of water pollution in this country, and the U.S. Environmental Protection Agency reports more than half of the nation’s rivers and streams are now considered degraded.

In 1985, Congress added basic erosion control and wetlands conservation requirements to the federal Farm Bill as a condition for receiving crop subsidies and conservation funds. Today, however, farm support systems are changing, and taxpayers are providing huge subsidies for federal crop insurance—the one benefit of the law that is not linked to conservation requirements—at a time when those insurance risks are growing worse in a warming world. In response, NWF has been working with partners and members of the U.S. farm community to close this loophole.

The theory is simple: You do the right things on your land, and we will help you pay for crop insurance. Michigan Senator Debbie Stabenow, chair of the Senate Agricultural Committee, embedded that concept in the version of the Farm Bill that passed the Senate earlier this year. Meanwhile, the House of Representatives passed a version of the bill that does not require farmers to comply with erosion control and wetlands conservation practices in order to receive crop insurance subsidies. Sadly, that version, for the first time since 1985, would allow many farmers to receive significant taxpayer support while still draining wetlands and allowing massive soil erosion on their land.

With intensifying superstorms and violent floods, soil erosion is expected to get much worse in the years ahead. From Arizona to western Texas, the Southwest already is experiencing more frequent dust storms and massive forest fires so hot they burn the organic humus from forest soils. And when the topsoil sponge is burned, rainfall produces greater potential for rapid runoff and flash floods.

As climate change threatens to further damage productive soils, we must do more—not less—to maintain these precious resources and curb water pollution. NWF recently issued a report called Counting Cover Crops that assesses the state of winter cover crops. These are critical for protecting exposed agricultural lands, cutting sediment losses, replenishing soils and providing vital cover for wildlife. Unfortunately, such crops currently are used on only 2 percent of farmland in the Mississippi River Basin.

In the Middle East, we’ve seen images recently of dust storms so large they darken the sun across a barren desert landscape that sits between the Tigris and Euphrates Rivers—a region once called Mesopotamia, the famed “Fertile Crescent.” Considered the birthplace of civilization because of its extravagant capacity to produce a diversity of crops and domesticated animals, the Crescent enabled its residents to move beyond subsistence living and forge more advanced cultures. Today, however, after centuries of abuse to the land, the Fertile Crescent has lost much of its capacity to produce food. Instead, it now produces a lot of dust. We should take heed.

I am troubled by the acceleration of human-caused soil degradation during the past century with no end in sight. With overpopulation and failed land stewardship, humans now wield the capacity to degrade and destroy productive agricultural lands faster than ever.

Do we need to destroy every landscape we touch? My answer is an emphatic NO! We must learn lessons from past generations. By working together to advance sound soil management practices such as winter cover and continuing to require erosion control as a condition for receiving subsidies, we can have healthy, abundant farmlands. By restoring damaged lands, we can maintain vital resources and prevent further degradation of our waters as we confront climate change by storing carbon in our soils.