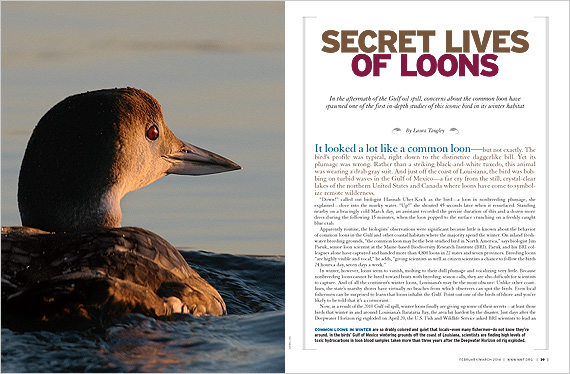 IT LOOKED A LOT LIKE A COMMON LOON—but not exactly. The bird’s profile was typical, right down to the distinctive daggerlike bill. Yet its plumage was wrong. Rather than a striking black-and-white tuxedo, this animal was wearing a drab gray suit. And just off the coast of Louisiana, the bird was bobbing on turbid waves in the Gulf of Mexico—a far cry from the still, crystal-clear lakes of the northern United States and Canada where loons have come to symbolize remote wilderness.

“Down!” called out biologist Hannah Uher-Koch as the bird—a loon in nonbreeding plumage, she explained—dove into the murky water. “Up!” she shouted 45 seconds later when it resurfaced. Standing nearby on a bracingly cold March day, an assistant recorded the precise duration of this and a dozen more dives during the following 15 minutes, when the loon popped to the surface crunching on a freshly caught blue crab.

Apparently routine, the biologists’ observations were significant because little is known about the behavior of common loons in the Gulf and other coastal habitats where the majority spend the winter. On inland freshwater breeding grounds, “the common loon may be the best-studied bird in North America,” says biologist Jim Paruk, senior loon scientist at the Maine-based Biodiversity Research Institute (BRI). Paruk and his BRI colleagues alone have captured and banded more than 4,800 loons in 22 states and seven provinces. Breeding loons (below, in British Columbia) “are highly visible and vocal,” he adds, “giving scientists as well as citizen scientists a chance to follow the birds 24 hours a day, seven days a week.” 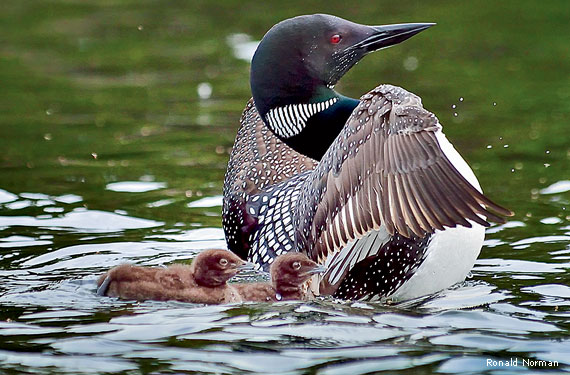 In winter, however, loons seem to vanish, molting to their dull plumage and vocalizing very little. Because nonbreeding loons cannot be lured toward boats with breeding-season calls, they are also difficult for scientists to capture. And of all the continent’s winter loons, Louisiana’s may be the most obscure: Unlike other coastlines, the state’s marshy shores have virtually no beaches from which observers can spot the birds. Even local fishermen can be surprised to learn that loons inhabit the Gulf. Point out one of the birds offshore and you’re likely to be told that it’s a cormorant.

Now, as a result of the 2010 Gulf oil spill, winter loons finally are giving up some of their secrets—at least those birds that winter in and around Louisiana’s Barataria Bay, the area hit hardest by the disaster. Just days after the Deepwater Horizon rig exploded on April 20, the U.S. Fish and Wildlife Service asked BRI scientists to lead an effort to evaluate the impact of the spill on seven bird species—including the common loon—as part of the federal Natural Resource Damage Assessment process.

While results of that assessment remain classified, “from the start, I’ve been more concerned about long-term, sublethal effects of the oil than its immediate impact,” says Paruk, who headed the loon portion of the project. To investigate those effects, he launched an ongoing study of the health and winter ecology of Gulf loons. Funded by the Earthwatch Institute, Snow Family Foundation and BRI, the research is shedding light on the birds’ feeding, migration and other behaviors. Sadly, it also is beginning to suggest that loons have been harmed more by the oil spill than scientists previously realized. 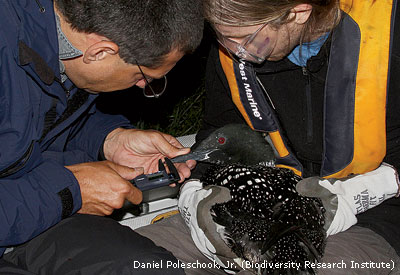 Beginning their fourth field season this winter, Paruk, Uher-Koch and their colleagues, including dozens of Earthwatch volunteers, are observing and recording the behavior of individual loons daily for 30-minute intervals. At night, they head out into the Gulf by boat to capture birds, which are released after they are banded, weighed, measured (left) and assessed for overall health. The researchers also take blood samples analyzed later in the lab for constituents including oil and other contaminants.

“One of the first things we noticed about these loons was that they are small,” says Paruk, who has studied the species for more than 20 years. Verified by weights and other measurements, the loons’ diminutive size was surprising because researchers assumed they were migrating from breeding grounds in the Midwest. “Smaller birds are suggestive of long-distance migrants,” Paruk explains—and sure enough, satellite transmitters carried by two Gulf loons in 2011 revealed that the birds flew more than 2,500 miles to breed in Saskatchewan, Canada. The following winter, both birds returned to the same Louisiana bays where they had been captured.

Scientists also discovered that loons in the study area feed more on crabs than on fish. In their breeding lakes, the birds almost exclusively eat fish. Paruk speculates that loons in the Gulf turn to crabs, a “suboptimal food,” because these visual predators have trouble seeing well enough in turbid water to catch fish. Why, then, don’t the birds move to clearer waters farther from the Mississippi River? Paruk suspects loons “may be genetically programmed to return to the same wintering locations each year.”

Confirmed by satellite tracking as well as resightings of birds wearing unique combinations of colored leg bands (below), such “site fidelity” is worrisome if it means loons stick around in habitats that become inhospitable. Winter is the most stressful time of year for the birds, with more deaths occurring then than during the breeding season. One reason is the physiological challenges birds face when switching from a freshwater to saltwater habitat. Loons also undergo an energy-intensive wing molt in winter. For three to five weeks during the process, they are unable to fly—turning the birds into sitting ducks for hurricanes and environmental disasters such as oil spills. 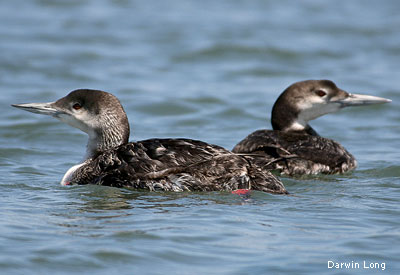 To investigate the effects of the Gulf oil spill on loons, Paruk and his colleagues are looking specifically for polycyclic aromatic hydrocarbons, or PAHs, in the birds’ blood. The class of hydrocarbons most toxic to wildlife, PAHs cause a range of health problems, including anemia, weight loss, liver damage, cancer and immunosuppression.

During the first two years of their study, the researchers discovered that the number of loons with PAHs in their blood increased between 2011 and 2012, as did concentrations of the contaminants. Overall PAH levels remained low, however.

But last winter, Paruk says, “we detected a large spike in PAHs and a completely different oil signature—heavy PAHs that are more toxic to wildlife.” Toxicologist Christopher Perkins of the University of Connecticut, who analyzed the blood samples, says heavy PAHs tend to be associated with older, weathered oils found in tar balls and mats, which can be uncovered over time by hurricanes and other storms.

Unpublished as this article went to press, the new findings worry Paruk. That loons have significantly more PAHs in their blood now, three years after the spill, suggests that hydrocarbons are making their way up the food chain, he says, from zooplankton to crabs and fish to top predators such as loons. And unlike their first two years’ results, Paruk adds, “the concentrations we’re finding now may be high enough to cause physical harm.” This year the researchers will analyze blood samples for signs of immune system problems and tissue or organ damage.

NWF Senior Scientist Doug Inkley is not surprised by Paruk’s results. “Other oil spill disasters have taken years to reveal their full effects, and often recovery is not complete decades later,” he says. “Nearly a quarter-century after the Exxon Valdez spill in Prince William Sound, sea otters and orcas are still considered ‘recovering,’ and the Pacific herring population, commercially harvested before the spill, is showing few signs of recovery.” 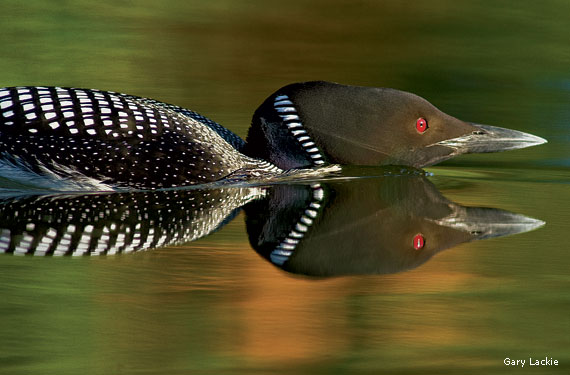 In the Gulf, Paruk’s discovery suggests that the habitat as a whole may be suffering. Long-lived top predators, common loons are considered indicators of overall ecosystem health. Across the Northeast and Midwest, for instance, scientists began looking at mercury in loons during the late 1980s to document contamination of the regions’ apparently pristine lakes by this heavy metal. “By studying loons, we ultimately came to a better understanding not just about the presence of mercury in lakes, but also what it meant,” says BRI Executive Director and Chief Scientist David Evers, who pioneered the studies. What it meant was that loons exposed to mercury were experiencing serious health problems as well as decreased reproductive success—results with troubling implications for another fish-eating predator: Homo sapiens.

According to Evers, “our findings about loons and mercury, along with the birds’ high-profile status, helped galvanize people to pressure policymakers.” It worked: Two years ago, the federal government issued final rules that will reduce mercury emissions from coal-fired power plants—their major domestic source—91 percent by 2015.

In the Gulf, meanwhile, nearly four years after the oil rig exploded, BP and others are still haggling over fines and responsibility for the disaster as habitat continues to suffer. It’s a perfect time for scientists to bring to light the secret lives of the loons that depend on these troubled waters for survival.

NWF Priority: Gulf Oil Disaster
Since shortly after the Deepwater Horizon rig exploded in April 2010, NWF staff, affiliates, partners and volunteers have been working on the front lines for recovery of the region’s wildlife, waters and communities. Once the oil well was capped, this work shifted to advocating for policy reforms—to ensure that a similar disaster never happens again—and to efforts to direct BP penalty funds toward restoring the Gulf and its coastline. To learn more, go to www.nwf.org/oilspill.

Help protect wildlife in the gulf and across the country >>