Wolves of Isle Royale are declining due to inbreeding 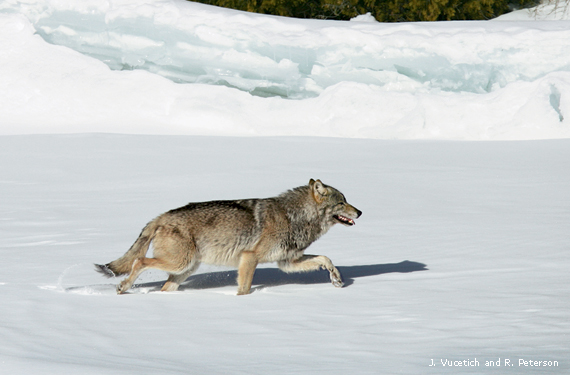 THE FAMED WOLVES of Michigan’s Isle Royale National Park may be on their way to extinction from inbreeding. Wolves first established a population on the island in the late 1940s by crossing from Canada via frozen Lake Superior. Their survival has depended on periodic genetic influxes from mainland wolves during years when the lake froze, as it did seven out of 10 winters in the 1960s.

During the past 17 years, however—in the wake of climate change—ice bridges formed only three times, including last winter. As a result, researchers have tallied the lowest numbers of wolves ever—an average of fewer than nine yearly during the past three years (the population typically fluctuates between 18 and 27 animals). Meanwhile, the proportion of the moose population killed by wolves has dropped to a record low, and the number of moose has doubled, to about 1,050.

“The poor condition of wolf predation on Isle Royale appears to be caused by inbreeding,” says John Vucetich, director of Michigan Technological University’s study of Isle Royale wolves and moose, now in its 56th year. Vucetich and his colleagues fear that if the moose population continues to grow, it could cause “long-lasting harm to Isle Royale’s forest.” They have urged the National Park Service to introduce wolves to the island, but park officials plan no intervention in the foreseeable future.