Action Report: How NWF and Its Affiliates are Making a Difference

From aiding pollinators in peril to protecting rain forests, the Federation is working for wildlife 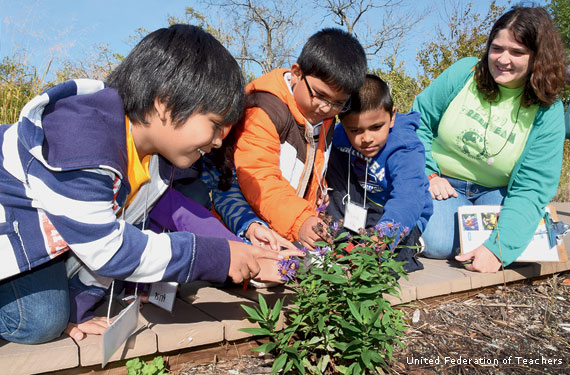 Giving birds, bees, butterflies and other wildlife a wing up

In response to the White House issuing a Presidential Memorandum calling for a federal strategy to help pollinators, NWF has entered into a landmark agreement with the U.S. Fish and Wildlife Service (FWS) to increase habitat for monarchs and other pollinators.
Bats, bees, butterflies and other pollen carriers fertilize more than 85 percent of the world’s flowering plants and two-thirds of crop species. Yet pollinators have been declining during the past few decades due to loss of habitat, disease and other stresses. The agreement with FWS is part of a series of initiatives by NWF and its partners that help pollinators. For example:

• NWF successfully advocated for a “sodsaver” program in the 2014 Farm Bill, which reduces crop insurance subsidies for lands recently converted from native grasslands.

• Through  NWF’s Eco-Schools USA program, students from 12 schools in Brooklyn and Queens grew pollinator-friendly gardens, restored pollinator habitat at a refuge and learned about the role pollinators play. “There’s nothing more valuable than learning where your food comes from,” says PS 179 teacher Diane Corrigan (with her students, above).

Be a Butterfly Hero 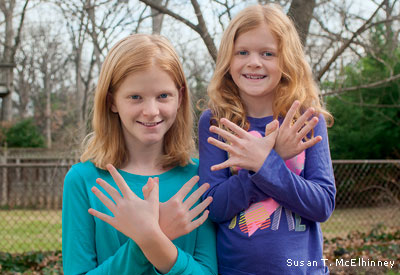 Join NWF’s new Butterfly Heroes campaign to help restore monarch butterflies. From now until May 15, we invite you to send us a photo of you or others making the American Sign Language symbol for “butterfly,” as shown by Emery and Nora Parker (left to right).

When you submit the photo, NWF will send you a free butterfly garden starter kit (while supplies last). For details, visit www.nwf.org/butterflyheroes.

Thanks, and please spread the word!

On the eve of the 30th annual San Francisco Flower and Garden Show (March 18 to 22), NWF hosted a special event for guests to preview the show’s vivid blooms and garden designs. This first-ever event signals the Federation’s growing support of garden shows, including the annual show in Seattle and Disney’s Epcot festival, which often feature native plants of value to wildlife. Enjoy your local garden show—and get an early taste of spring.

Going Green to Save the Wild Blue 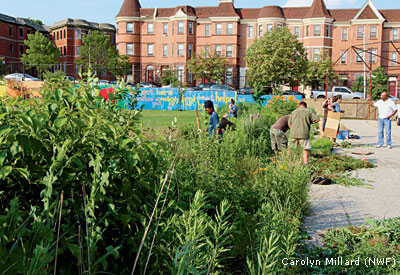 The National Wildlife Federation and the National Aquarium–NWF’s Maryland affiliate–are teaming up to help Baltimore “B’More Wild,” a program that would transform the city into the largest NWF-certified Community Wildlife Habitat™ along the Chesapeake Bay. This effort will help improve water quality in the bay, which flows into the Atlantic Ocean.

Baltimore is well on its way to achieving this goal. NWF has certified more than 300 city homes for providing food, water and shelter for wildlife. The Federation has also hosted garden-installation days at Baltimore schools and parks to help teach volunteers gardening techniques. For instance, residents from the Reservoir Hill neighborhood installed about 300 native pollinator-friendly plants to create a Schoolyard Habitats® site and rain garden at John Eager Howard Elementary School (left).

The Federation also certified several community rain gardens to help filter runoff from city streets, reducing the amount of pesticides, fertilizers and other pollutants that enter the Chesapeake Bay. Such pollution can feed toxic algal blooms that harm human health and smother fish, blue crabs and other aquatic wildlife. “We are dedicated to a healthy harbor, and we believe that can happen if we all get involved in greening our city,” says National Aquarium CEO John Racanelli.

To help waters nationwide, the aquarium is asking people to pledge to protect and conserve water from Earth Day (April 22) through World Oceans Day (June 8). Actions can be as simple as giving up plastic water bottles to turning off the tap when brushing your teeth.

You can learn more at www.facebook.com/bmorewild or www.aqua.org/certify, and anyone can take the pledge to help our blue planet at 48daysofblue.com. 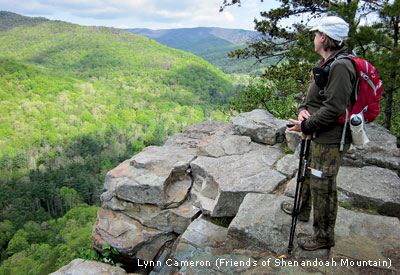 Thanks to a massive public effort, no new leases for oil and gas drilling—including fracking—will be allowed for up to 15 years in George Washington National Forest (right) along the Virginia–West Virginia border, a move that will help protect wildlife habitat and drinking water for 4.5 million people in the Chesapeake Bay watershed.

Some 10,000 acres in the forest have already been leased for federal oil and gas development (although none of those leases are active), and the mineral rights for another 167,000 acres are privately owned. But the recent ban on new leases will help protect the vast majority of the forest’s 1.1 million acres.

The protections are part of a new forest management plan developed by the U.S. Forest Service and supported by the Choose Clean Water Coalition. Led by the Southern Environmental Law Center and Shenandoah Valley Network, 75 coalition partners—including NWF and its affiliate, the Virginia Conservation Network—gathered more than 50,000 signatures of support for the new plan.

“The impacts to the forest’s pristine waters from fracking would be catastrophic,” says the coalition’s Peter Marx.  “Banning additional oil and gas development was critical to protect this forest, source of the headwaters of the James and Potomac Rivers.” Visit www.choosecleanwater.org. 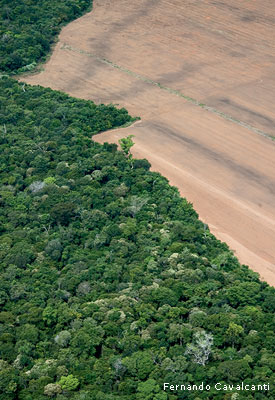 After a year of NWF urging buyers and traders of Brazilian soy to continue their pledge to not buy soy from farms that have cleared Amazon rain forest (such as the one pictured below in Mato Grosso, Brazil), they reversed their decision to end the moratorium and allowed it to continue until at least 2016. This is good news for wildlife such as rare jaguars, primates and amphibians that rely on rain forest habitat.

The moratorium, begun in 2006, is the first voluntary zero-deforestation agreement in the Tropics and one that has set the standard for other industries, including beef.

Nathalie Walker, senior manager of NWF’s tropical forest and agriculture program, and her coauthors on a paper published in Science in January, are stressing the need for the moratorium to be extended even beyond next year because compliance with Brazil’s land-use laws is poor and the moratorium has been very effective. For example, she and her colleagues write that prior to the agreement, “nearly 30 percent of soy expansion occurred through deforestation,” but by 2014, this fell to only 1 percent. To learn more, go to www.nwf.org/deforestation. 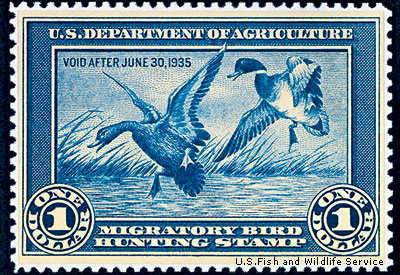 In December, the U.S. Congress approved raising the price of the U.S. Fish and Wildlife Service’s Migratory Bird Hunting and Conservation Stamps, or Duck Stamps, from $15 to $25. NWF founder and noted illustrator Jay Norwood “Ding” Darling drew the first stamp (right) in 1934. Since then, Duck Stamp sales have generated more than $800 million to acquire more than 6 million acres of wetlands for the National Wildlife Refuge System.

“This is big win for wildlife,” says Bentley Johnson, NWF’s manager of public lands advocacy. “Nearly 98 cents of every Duck Stamp dollar go toward protecting habitat for waterfowl and hundreds of other native species, including a third of those endangered and threatened.”

Waterfowl hunters must purchase a stamp. Others can support conservation by buying Junior Duck Stamps for $5. Learn more at www.nwf.org/duckstamps.

On May 15—the 10th anniversary of Endangered Species Day—NWF is hosting a 24 Hours of Giving campaign to increase awareness about the plight of America’s endangered species and to raise funds that will support work on their behalf.

Since its founding in 1936, the Federation has worked to conserve at-risk species. It helped bring about the Endangered Species Act in 1973 and continues to work for species in peril. To participate in the campaign, text “WILD” to 25383 and you’ll send an instant $10 donation to help the cause. For more information, go to www.nwf.org/ESDay.