NWF, U.S. Fish and Wildlife Service and others unite to restore habitat for monarch butterflies 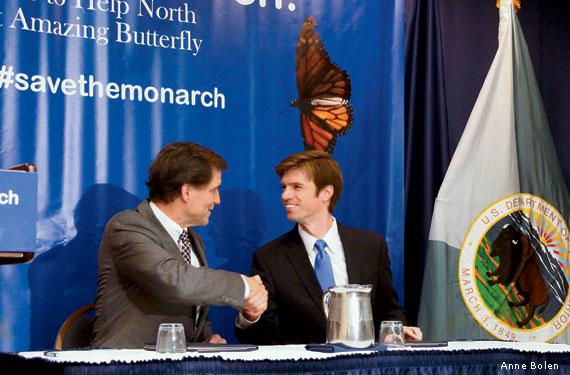 THE MIGRATION OF NORTH AMERICA'S MONARCH BUTTERFLIES is one of the natural world’s most epic journeys—and an enriching experience for millions of kids every year (like my little Riley). After spending summers in the backyards and grasslands of the United States and southern Canada, monarchs fly up to 2,000 miles to overwinter in Mexico’s mountain forests. These vivid fliers are also vital plant pollinators. But monarch numbers have plummeted by more than 900 million (more than 80 percent) in the past 20 years, a trend with serious consequences for ecosystems and all who depend on them.

Now monarchs have new muscle in the fight for survival. In February, the National Wildlife Federation and the U.S. Fish and Wildlife Service (FWS) signed a memorandum of understanding that affirms our commitment to collaborate on restoring and conserving monarchs. FWS recently launched a status review of monarchs under the U.S. Endangered Species Act and has pledged $1.2 million to the National Fish and Wildlife Foundation to foster public-private partnerships dedicated to monarch conservation. In addition, FWS has pledged $2 million to restore and enhance more than 200,000 acres of prime monarch habitat and to support more than 750 schoolyard habitats and pollinator gardens, sites fundamentally relevant to NWF and its mission.

Their Wings Are in Your Hands

As notable as these efforts are, monarch conservation cannot be handled by government alone. It is a challenge each of us can help address one garden, schoolyard and neighborhood at a time, and the approach is as basic as digging a hole and planting a seed.

Monarchs lay their eggs exclusively on milkweed plants because milkweed leaves are the only food the butterflies’ caterpillars can eat. Yet as native grasslands have been transformed into agricultural croplands treated with plant-killing herbicides, milkweed has dramatically declined. Road construction, utility corridors, urban development and other public and private land uses are also eliminating milkweed as well as nectar plants that help fuel monarch migrations.

To address the crisis, FWS and NWF will work with individuals, governments, schools and the agriculture industry to expand milkweed habitat and adopt less toxic practices. We’ll encourage seed companies and nurseries to distribute more native milkweed. We’ll work with educational programs and our great state affiliates to spread the word about the issues and potential solutions. And we’ll continue our efforts with the Monarch Joint Venture, a coalition of federal, state and private groups working to protect monarchs through science-based conservation.

Unlike species such as bison or bears that need vast corridors of land to thrive, monarchs can benefit from each small patch of native milkweed. If every person reading this column lends a hand by planting milkweed and certifying their yard as an NWF wildlife habitat, imagine the collective impact. We’re ready to help. Our Garden for Wildlife™ program shows how you can create spaces that sustain pollinators and other species. By participating, we can each make our homes, businesses, schools and communities more welcoming to monarchs and other pollinators. So join us and take part in this nationwide call to action. In doing so, you will help ensure that future generations have a chance to look skyward and see the flutter of orange wings.