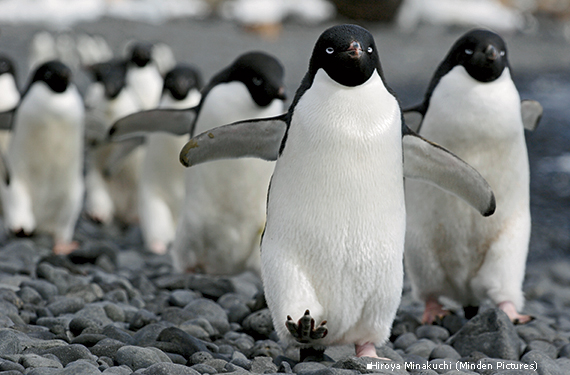 THE FIRST GLOBAL CENSUS of the Adélie penguin, a key indicator species for the effects of climate change in the Southern Ocean around Antarctica, has revealed that the bird’s global population, tallying 3.79 million breeding pairs, is 53 percent larger than previous estimates. Conducted by Stony Brook University ecologist Heather Lynch and conservation biologist Michelle LaRue of the University of Minnesota, the census was published recently in The Auk: Ornithological Advances. It suggests that Adélie populations worldwide appear to be growing.

“We believe this is a landmark study with data that provide not only information on the population dynamics of Adélie penguins but also inject critically needed information into ongoing negotiations regarding the implementation of marine protected areas in the Southern Ocean,” Lynch says. She added that Adélie penguin distribution and abundance reflect the distribution of their prey—mainly krill and fish.

Read More News of the Wild
The Shrinking World of Penguins
NWF at Work: Safeguarding Wildlife and Ecosystems from Global Warming