NWF, its affiliates and partners are working for wildlife, from combating invasive species to protecting orcas 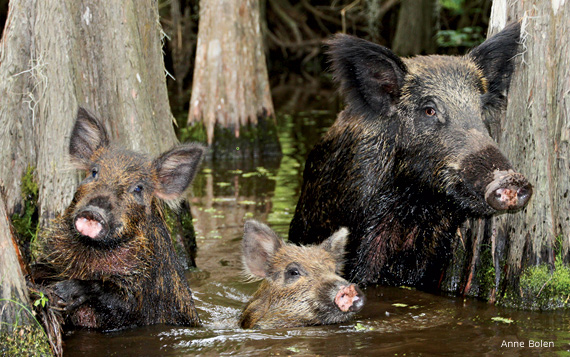 Invasive species disrupt ecosystems, threaten biodiversity, compete with native species for food and habitat, and cause billions of dollars in damage. Following are just some ways the Federation, its state affiliates and partners are fighting to prevent the introduction of nonnative species, control those already established and restore impaired habitats:

• Feral pigs and hogs (above) are now found in at least 35 states. These swine root up trees and destroy undergrowth, displace ground-nesting birds, sea turtles and burrowing animals, and carry diseases that can infect domestic livestock and humans. In 2012, the Federation adopted a national resolution that supports stronger measures to control these destructive animals. NWF also pushed for the passage of the 2014 U.S. Farm Bill, which allocates $20 million for the U.S. Department of Agriculture to help farmers control feral swine.

• For the past two years, NWF affiliate Conservation Council for Hawai‘i has been among the organizations supporting state and federal wildlife agencies in developing a program to target introduced rodents and mongooses in the islands’ fragile conservation areas. These nonnative species spread diseases to endangered monk seals and prey on endangered native plants, tree snails, sea turtles and birds as well as their eggs and chicks. 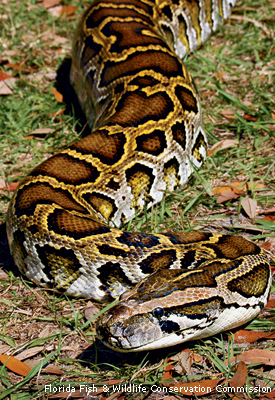 • The Federation and other members of the National Environmental Coalition on Invasive Species and NWF affiliate the Florida Wildlife Federation successfully campaigned in 2012 for the U.S. Fish and Wildlife Service to list four large constrictor snake species—Burmese pythons (right), yellow anacondas and northern and southern African rock pythons—as “injurious” under the Lacey Act. This restricts their import into the United States and transport across state lines. This is critical in Florida, where more than 150 exotic reptile and amphibian species are devouring and outcompeting native wildlife.

• Since 2007, NWF has helped secure federal funding to build electric fish barriers that impede Asian carp from entering the Great Lakes from the Mississippi River, where they are outcompeting native fish. NWF is now working with state and federal agencies on a plan that would permanently separate a canal system that connects the Great Lakes to the Mississippi.

• In 2013, NWF filed a lawsuit against the U.S. Environmental Protection Agency to strengthen requirements for vessels to treat their ballast water for nonindigenous species before discharging it. Ballast water most likely transported many of the more than 180 invasive species in the Great Lakes, including European zebra mussels and quagga mussels.

• Invasive plants such as an introduced Phragmites reed are taking over East Coast marshes. NWF is leading an effort to rebuild the health of Massachusetts’ Great Marsh and therefore its resiliency to climate change, in part by restoring its native plants.

Go to www.nwf.org/invasives to learn more about NWF’s work to stop nonnative species and follow our Twitter feed @GotInvasives at www.twitter.com/gotinvasives. 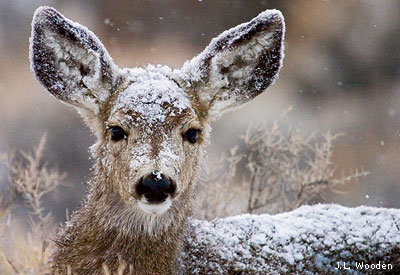 NWF and its affiliate the Colorado Wildlife Federation highlight the problem in their recently released Legacy in the Crosshairs: Colorado’s Mule-Deer Factory on the Decline. Among this fact sheet’s recommendations are that biologists and land managers work together to consider cumulative impacts on deer when crafting management plans and evaluating potential development on public lands.

In addition, as part of the Wyoming Mule Deer Coalition, NWF affiliate the Wyoming Wildlife Federation is helping Wyoming Migration Initiative researchers examine the species’ decline and ease a mule deer herd’s migration route. To find forage, as many as 5,000 mule deer climb over fences, roads and other barriers while traversing 150 miles from the Red Desert to the Hoback Basin in western Wyoming.

See Mule Deer Decline and www.nwf.org/muledeer to download Legacy in the Crosshairs. 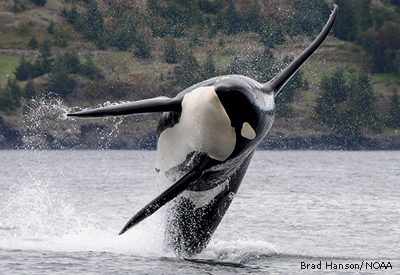 In August, the Oregon Department of State Lands denied a permit for Ambre Energy to build a coal port terminal along the Columbia River, stating in its report that “the project is not consistent with the protection, conservation and best use of the water resources of this state.” Although the company is appealing the decision, the permit denial stalls the fourth of six coal port terminals proposed in Oregon and Washington. NWF, its affiliate the Association of Northwest Steelheaders (ANS) and partners have battled these ports for more than three years.

The department determined that coal barges could interfere with fishing boats and juvenile fish around the proposed dock. In addition, dust blown from trains and barges transporting coal from mines in Wyoming’s and Montana’s Powder River Basin could pollute the region’s American Indian reservations and rivers. Endangered orcas (right) and Northwest tribes depend upon salmon from these rivers, including the Columbia.

Decisions on two proposed port terminals are still pending. ANS Executive Director Bob Rees says stopping these coal terminals is critical to the region’s economy and cultural heritage. “The best way to honor our historic fishing grounds is to protect them,” he says. Visit www.nwf.org/coalexports. 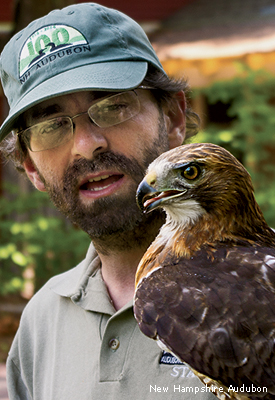 NWF affiliate the New Hampshire Audubon (NHA) began 100 years ago as a small group of men and women who had gathered to fight the overhunting of birds for food, sport and fashion. Millions of birds were being killed for their feathers, which were used to decorate hats.

NHA has since blossomed into a more-than-5,000-member organization. It has established 39 sanctuaries that protect nearly 8,000 acres of wildlife habitat. It conducts conservation research, citizen-science projects and statewide bird-monitoring programs that have led to publications such as the State of New Hampshire’s Birds. It also advocates for science-based policies to protect wildlife and provides educational programs (such as this one about birds of prey) that reach more than 20,000 youth and adults annually. In honor of its 100th anniversary, NHA is offering a free one-year membership to New Hampshire educators through 2014.

Bolstered by the organization’s successes and affiliation with NWF, NHA President Michael Bartlett says, “New Hampshire Audubon is entering its second century with a renewed sense of purpose.” Visit www.nhaudubon.org.

NWF trained 150 Habitat Stewards in Texas, Ohio, Florida, North Carolina and Delaware in 2014. By the end of their first year, these volunteers will have contributed 4,500 hours of time teaching others in their communities how to create welcoming spaces for wildlife. Learn more about this and other NWF Garden for Wildlife™ volunteer opportunities at www.nwf.org/volunteer.

Bringing Nature to the Neighborhood 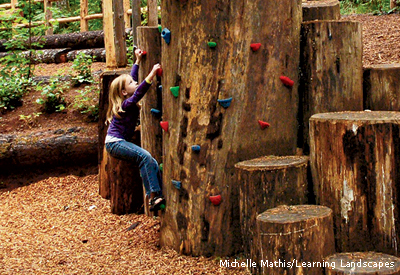 In a world where the virtual is often more enticing to kids than the real, getting them to play outdoors is a challenge. NWF and the Natural Learning Initiative’s new guide, Nature Play & Learning Places: Creating and Managing Places Where Children Engage with Nature, shows how to use natural materials and settings to design play areas that inspire desire to explore the environment.

Funded by the U.S. Forest Service, the guide is written by leading play space designer Robin Moore and features contributions from more than 20 national organizations. It discusses the maintenance and risks of natural materials and provides 11 case studies of nature-based play areas already in use, such as the wildlife-themed playground in Oregon’s Silver Falls State Park (above), where children can hide in a mountain lion den. Included in the guide are tips for developing community support for such projects.

“A nature play area is a great way for families to connect with nature and wildlife at everyday locations such as schools, parks, childcare centers and museums,” says Allen Cooper, NWF’s director of state and local education advocacy. Download a free copy of the guide from online.nwf.org/natureplayandlearning.

A centuries-old farming practice is now being recognized as a proactive way to protect soil and generate jobs. Cover crops are planted during winter to prevent soil from eroding while retaining its nutrients. However, because not all such crops may be marketable, U.S. farmers stopped planting them in the 1950s and began relying on fertilizers to boost soil nutrients lost between seasons.

NWF’s recently released report The Growing Business of Cover Crops shows how resurrecting this practice has been lucrative for farmers as well as their communities. For example, such crops reduce the need for fertilizers, herbicides and pesticides, retain soil moisture and improve crop yields. Also, a once-idle growing season now provides jobs for crop advisors, seed producers, sales persons and livestock ranchers, as some of these lands can now be turned into grazing pasture. The report also walks farmers through designing a business plan and provides information about funding sources.

“This is a great way to boost the rural economy, support America’s farmers and be part of making sustainable agriculture common practice,” says Trisha White, NWF’s senior agriculture policy specialist and the report’s lead author. Download the report from www.nwf.org/business-of-cover-crops.

Giving as a Family Affair 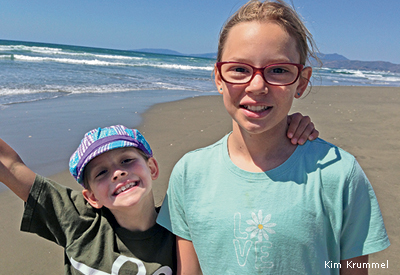 Kim and Max Krummel of San Francisco, California, often take their daughters, Elsa, 9, and Esmé, 12 (right), on outings to share their love of nature. “When you go outdoors and see endangered critters, you start to care about them,” says Kim. “Kids are great because they always ask questions, and their first impulse is to help.”

So the parents presented the girls with a piggy bank with three slots labeled “Save,” “Spend” and “Share,” and then the family discussed where the “Share” money would go. After the girls researched organizations and read their Ranger Rick and National Wildlife magazines, they chose NWF because, Kim says, “They wanted to help national as well as local wildlife.” With NWF staff, the family had recently watched harbor porpoises swim in San Francisco Bay.

Esmé says, “Animals are a real big part of our society and our environment. We couldn’t do without them.” Elsa agrees, “I would spend more money on National Wildlife Federation than on an ice cream.”
To support NWF’s work, go to www.nwf.org/how-to-help.