Scent of a lemur, benefits of camping, playfull crocodiles and more 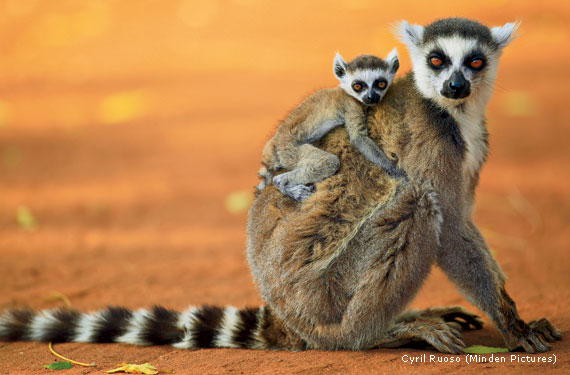 In the first evidence in any animal species that a pregnant mother’s scent varies depending on the sex of the infant she carries, Duke University primate experts report that lemur moms expecting males smell different than those with females. The study is based on work with captive ring-tailed lemurs housed at the university’s outdoor primate facility. “The difference in hormone profiles between pregnant lemurs carrying sons and those carrying daughters is dramatic,” says Duke evolutionary anthropologist Christine Drea. The scientists don’t yet know why this difference occurs.

About 90 species of native bees range in the San Francisco Bay area, including the black-tailed bumble bee (left). Recent research at San Francisco State University finds that native bees are providing important pollination services for the region’s urban gardeners. In the study, biologist Gretchen LeBuhn and colleague Drew Potter investigated tomato production on 16 large urban garden sites where some plants were left uncovered to be pollinated naturally by wild bees and other control plants were covered and were either self-pollinated or pollinated by the researchers.

“We were able to determine that tomato plants pollinated by wild bees significantly outperform the control groups, producing more and larger tomatoes,” they write in the journal Urban Ecosystems. Even more surprising, neither the size of a garden nor the amount of green space in the surrounding area seems to impact how much pollinator service a plant receives. Instead, the researchers say the key factor is the “floral resource density,” or the abundance of flowers at the garden site. The greater the density of flowers to help attract pollinators to a site, the higher the yield of the tomatoes.

Despite the good news, the scientists caution that with native bee numbers declining in many areas of North America, protecting the creatures’ habitat is crucial. “If populations of pollinators are not sustained,” says LeBuhn, “we could see a significant decline in urban agriculture.” 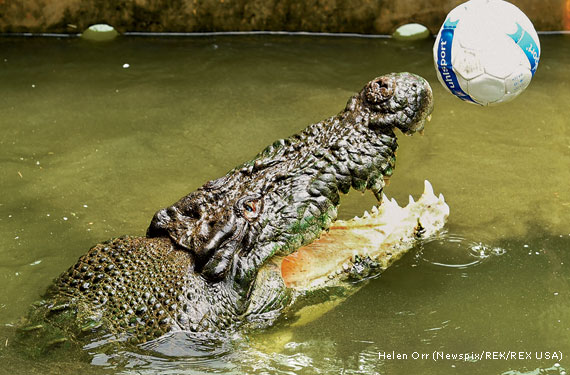 Crocs Just Want to Have Fun

Crocodiles are serious predators, but research psychologist Vladimir Dinets finds they also like to play. After studying crocodiles for nearly a decade, the University of Tennessee scientist has documented the first extensive evidence of playlike behavior among the massive reptiles, including giving piggyback rides, surfing waves and tossing objects, like this croc with a ball at a park in Australia. Writing in the journal Animal Behavior and Cognition, Dinets notes that his study builds on the body of work by other experts, showing that play is a universal feature of intelligent animals—those that show complex, flexible behavior.

Unique among small rodents for fighting rather than fleeing potential predators, the Norwegian lemming uses bites, lunges and loud screams when facing threats. According to biologist Malte Andersson of the University of Gothenburg in Sweden, these feisty traits, as well as a colorful coat, likely reduce the lemming’s risk of becoming prey. Reporting in Behavioral Ecology and Sociobiology, Andersson concludes that the species has evolved a defense strategy called “aposematism,” or the use of colors and other methods to warn off predators. Unusual in herbivorous mammals, aposematism is far more common in poisonous insects, snakes and frogs.

In one of the first studies of its kind, researchers at the University of Colorado-Boulder have found that lack of exposure to sunlight during the day and constant nighttime exposure to computer screens, televisions and other artificial light affects levels of the sleep-regulating hormone melatonin, creating changes in the internal biological clocks that tell us when to go to sleep and awaken.

Studying a group of adults during a typical week at work and at home, the scientists found that participants, on average, went to sleep past midnight and woke up around eight in the morning. But after spending days outdoors and nights in the dark during a week-long camping trip, the participants went to sleep and awoke about two hours earlier. “What’s remarkable is how, when we’re exposed to natural sunlight, our clocks perfectly become in synch in less than a week to the solar day says physiologist Kenneth Wright, who led the study.

Read More News of the Wild
NWF Connecting Kids & Nature: Green Time for Better Sleep Time
Crocodiles Use Twigs to Bait Birds
The Fossa and the Lemur
By a Nose: Birds' Surprising Sense of Smell