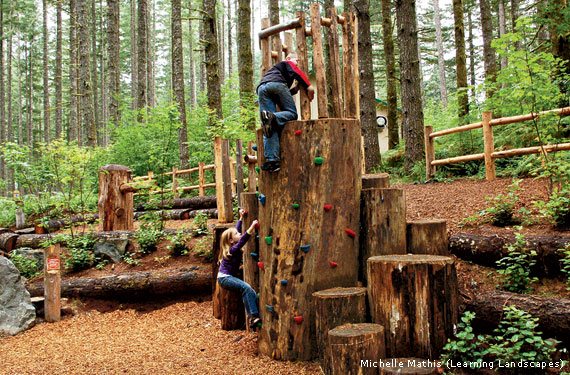 Scientists at Spain’s Centre for Research in Environmental Epidemiology have found that green areas near city schools improve the mental development of children and reduce exposure to air pollution—both of which help improve academic performance.

In their 14-month study—the first of its kind—the researchers tested 2,593 children ages 7 to 10 at 36 primary schools in Barcelona, some with more playground foliage than others. The results showed that after a year, kids exposed to more greenery (as measured by satellite imagery) got more exercise and displayed greater increases in cognitive skills such as memory and attentiveness than their peers with less access to green space. The researchers also found lower levels of traffic-related air pollution inside schools surrounded by greenery, which they believe contributed to the results. Reporting in June in the Proceedings of the National Academy of Sciences, they note how proximity to green spaces (such as the Oregon playground above) increases physical activity, which “has been associated with better cognitive function in children,” an advantage that could have “lasting effects through the life course.” To learn about creating green playscapes, visit online.nwf.org/natureplayandlearning. 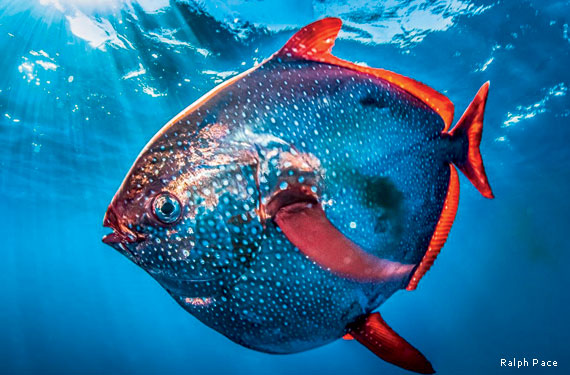 NOAA scientists have discovered that the opah, or moonfish, circulates heated blood throughout its body much as mammals and birds do, giving it a competitive advantage in its deep-sea habitat. Roughly the size of a large car tire, the opah ranges in oceans around the globe and swims by flapping its pectoral fins like wings. Through studies of specimen tissue samples, the scientists discovered that the fish’s vessels carry warm blood to its gills.

Writing in May in Science, the researchers noted that other fish inhabiting such cold depths tend to be slow and sluggish, conserving energy by ambushing prey instead of chasing it. But the opah’s constant fin flapping heats its body and speeds its metabolism, turning it into a high-performance predator that swims faster, reacts more quickly and sees more sharply than its prey. “There has never been anything like this seen in a fish’s gills before,” says NOAA Fisheries biologist Nicholas Wegner. 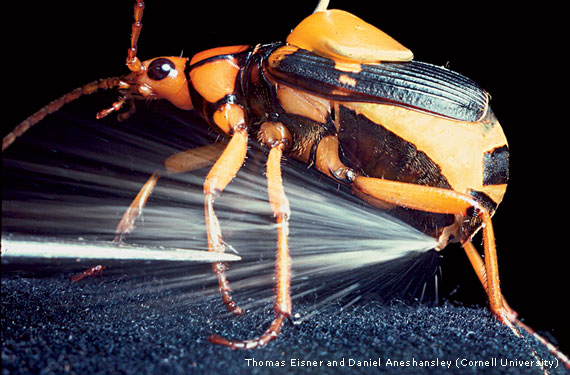 Bombardier beetles, which range on every continent except Antarctica, can instantly generate explosions in their abdomens that produce a boiling, irritating liquid, which they spray at potential attackers (captive beetle, above). Though experts have known about the species’ unique defensive tactic for decades, until now no one understood the mechanism that produces it. Combining field studies of wild bombardiers with laboratory work using high-speed x-ray imaging equipment, a team of U.S. scientists explained the complicated physiological process for the first time in an April issue of the journal Science.

“By having a pulsed delivery, these small beetles produce a relatively large amount of defensive spray, which they can aim precisely and with great force and speed,” says University of Arizona entomologist and study participant Wendy Moore. “This is truly one of the most remarkable and elegant defensive mechanisms documented to date.”

Light pollution is increasing by about 6 percent a year in many countries, and that’s bad news for moths, which generally prefer to reproduce in the dark. In a landmark study of the effects of such light pollution on cabbage moths, a common species in Western Europe, Dutch ecologist Koert van Geffen found that artificial lights are seriously disrupting the insects’ life cycles.

Reporting in April in Wiley Online, van Geffen noted that due to the lights, some moth caterpillars do not know what time of year it is. Rather than remaining in their normal rest stage until spring, they are emerging from their cocoons in the fall, resulting in a higher death rate during winter. He also found that female moths, which only release their species-specific pheromones at night to attract mates, breed much less often in lighted areas than in the dark. “Considering the rapid decline in moth populations in Western Europe,” says the scientist, “it is extremely important that we obtain more insight into the ecological causes of this problem.” 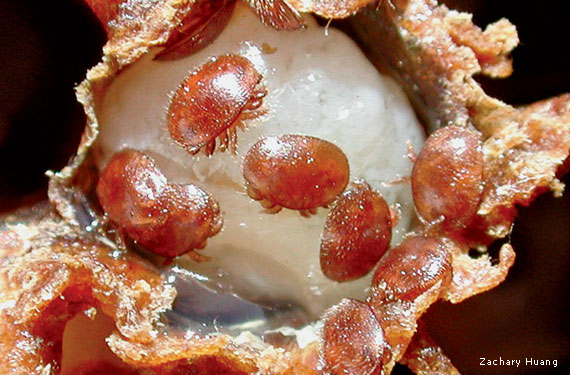 New research reveals that Varroa mites—the most serious threat to honeybees—are infiltrating hives by mimicking the smell of the bees, reducing the chances that they will be discovered and killed. The Michigan State University (MSU) study, published in June in Biology Letters, explains that the invasive parasites (above, on a honeybee pupal cell) originally attacked Asian honeybees but in the 1980s began infesting European honeybee hives. To infiltrate the complex society of the bees, the mites must generate precise faux scents. “They are getting through the door and reaching the inner sanctum by using bees’ own complex communication codes against them,” says MSU entomologist Zachery Huang. The researchers found that the mites can change their surface chemicals quickly, adapting to the specific scents of a new colony in days rather than evolving over generations.

Read More News of the Wild
Natural Playscapes: The Future of the Playground
7 Moths that Make Butterflies Look Boring
On the Trail of Native Bees
Good Bugs Gone Bad