Across the globe and the nation, NWF and its affiliates are leading the way in green education 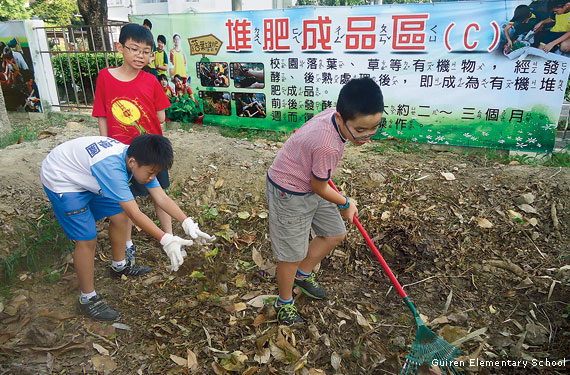 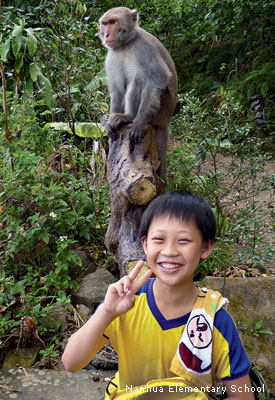 This past July, NWF Eco-Schools USA teachers and administrators flew across the Pacific to meet their sister schools in Taiwan as part of a new Eco-Campus Partnership Program. With 36 schools in each country participating, the initiative is “accomplishing mutual environmental goals on both sides of the globe,” says Laura Hickey, senior director of NWF’s K-12 education programs.

The three-year program, which NWF launched with its affiliate New Jersey Audubon in 2014, grew out of a two-decade collaboration between the Taiwan Environmental Protection Administration and the U.S. Environmental Protection Agency. Students in each country engage in projects that teach sustainability, such as conserving energy and water. They post their progress and swap ideas online.

Sandra Cornell, a teacher at Maryland’s North Chevy Chase Elementary, says the exchange with sister school Nanhua Elementary in Tainan City has “expanded our vision of what a green school could be.” Florida’s Griffin Elementary School teacher Jacqueline Sanchez says she is impressed with the way the Taiwan schools “integrated the importance of preserving their culture with the importance of preserving the environment.” Go to www.nwf.org/Eco-Schools-USA.

Planting the Seeds of STEM Learning 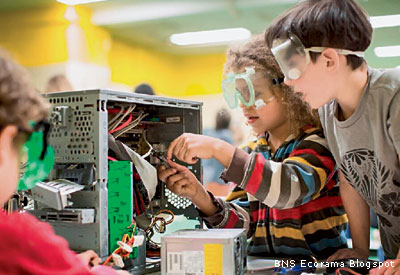 U.S. schools have been striving to improve their students’ science, technology, engineering and mathematics—or STEM—literacy for more than a decade. Now, with the latest U.S. Next Generation Science Standards requiring students to learn about the environment and more than 3,300 NWF Eco-Schools fostering such learning nationwide, the educational landscape is ready for “teachers to finally incorporate the environment into daily learning,” says Kevin Coyle, NWF vice president of education. 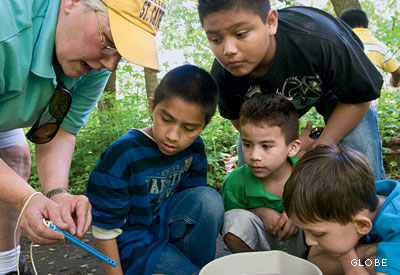 Students at more than 400 NWF Eco-Schools have become scientists, learning to use instruments to take valuable measurements and contributing their findings to an international database of Earth observations.

Launched in 1995 at the dawn of the Internet, Global Learning and Observations to Benefit the Environment (GLOBE), a partner of NWF, is implemented by University Corporation for Atmospheric Research in Colorado and funded primarily by the National Aeronautics and Space Administration. Since then, more than a million GLOBE students in 110 countries on six continents have uploaded more than 127 million measurements to its online database that is mined by classes and scientists worldwide. More than 49,000 teachers also have been trained to use the program’s free curriculum. “This is the only global citizen science program of its kind,” says GLOBE Implementation Office Director Tony Murphy.

GLOBE participants learn protocols to standardize their data as well as what changes in their observations—about atmosphere, water or soil moisture, for example—can tell them about the environment and their communities. “We can give them this information in textbooks, but collecting these data has meaning to them. They feel like they own those data,” says Lori Maxfield, who as a GLOBE coordinator showed Minnesota elementary students how to take measurements such as water temperature (left). Learn more at www.nwf.org/Eco-Schools-USA/GLOBE.

NWF affiliate program allows students to be scientists and conservationists 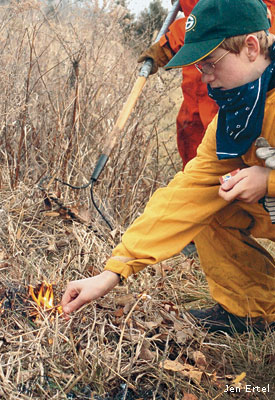 An innovative program in Wisconsin is enabling students to work alongside biologists on projects that not only teach the scientific process but also help their communities and the environment.

Wisconsin Green Schools Network Coordinator Victoria Rydberg founded the F.I.E.L.D. (Fostering Inquiry and Empowering Learners through Discovery) Corps in 2002 by partnering with the Wisconsin Wildlife Federation (WWF), an NWF affiliate. F.I.E.L.D. Corps biologists train teachers and work with elementary through high school students at least once a week at their schools or in their communities. Students have built trails with informative signs, planted native seeds, removed invasives and restored forest, wetlands and prairie—in part through controlled burns (right).

The program, now in a dozen schools and growing, “goes beyond the one-fieldtrip model of environmental education,” says Rydberg. By observing their work over time, she says the students “can see how their signature is left on the land.” WWF Executive Director George Meyer says such in-depth environmental experiences help create “lifelong conservationists.”

This fall, the F.I.E.L.D. Corps’ new mobile Discovery Lab will hit the road, bringing the experience of scientific fieldwork to four additional schools. Go to www.wisconsingreenschoolsnetwork.org to find out more. 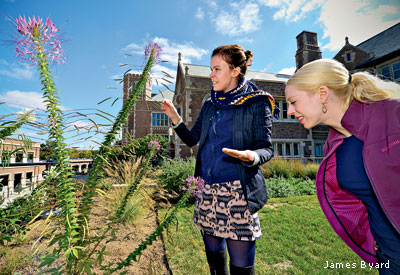 This fall, college campuses have even more inspiration to go a little wild. NWF’s Campus Ecology program has released its new The Campus Wild guide, which gives real-life examples of how U.S. colleges and universities are providing green spaces for wildlife.

This guide is designed to encourage EcoLeaders—students and young professionals participating in NWF’s environmental leadership certification and career development program—to pursue their goals through habitat-stewardship projects. One of the projects featured is Washington University’s (WU) green roof in St. Louis, Missouri, which mitigates stormwater runoff, insulates the building and provides space to grow herbs, vegetables and other plants that American Indians historically used for food, medicine and paint for pottery. “Being able to touch, smell, ingest and see these plants is incomparable to reading about them in a book,” says WU paleoethnobotony doctoral student BrieAnna Langlie (above, right). “We are bringing the past back to life out there.”

The guide cites other projects such as the University of Illinois–Chicago providing urban roosts for nesting peregrine falcons, Nebraska Wesleyan University restoring native prairie and Warren Wilson College (WWC) in North Carolina assessing the carbon content and sequestration power of nearly 10,000 trees on about 60 acres of campus forest. Stan Cross, interim director of WWC’s Environmental Leadership Center, says, “Getting students out of the classroom, dealing with real-life problems and developing solutions is what higher education ought to be about.”

Download the guide from www.nwf.org/Campus-Ecology/resources. To learn how to become an NWF EcoLeader, go to www.nwfecoleaders.org.