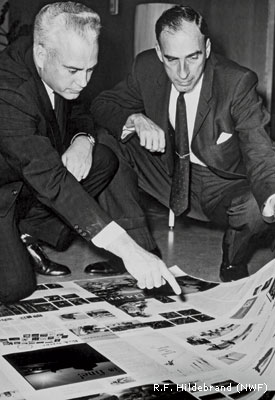 MARCH 15, 1949, marked a milestone in the history of the National Wildlife Federation. On that day, NWF hired a young bookkeeper named J.A. “Ash” Brownridge as assistant office manager in its Washington, D.C., headquarters. It was a decision that ultimately changed both the fortunes of the Federation and the way millions of Americans learned about the natural world.

A towering, modest man with a sharp business sense and knack for innovation, Brownridge developed new approaches to fund-raising that, within a year of his employment, erased NWF’s budget deficit and more than tripled its revenue during the next few years. These funds gave the 13-year-old organization the wherewithal to expand its wildlife work.

By the time Brownridge retired as administrative vice president in 1982, NWF had become the nation’s largest conservation-education  organization, with more than 4 million members and supporters. “He was a pioneer,” says U.S. Fish and Wildlife Service (FWS) Historian Mark Madison. “The business strategies he developed became a model for the conservation community.”

Brownridge, who helped found National Wildlife® magazine in 1962, passed away in June at the age of 98. Among his accomplishments, he was particularly proud of the late-1950s children’s book he authored starring a character called Rick Raccoon. It provided the basis for Ranger Rick® magazine, which the Federation began publishing in 1966 after Brownridge convinced a fiscally conservative board of directors that the publication would serve a vital function.

“Much of the country’s adult population had been brought up with the firm conviction that our resources were inexhaustible, and it was very difficult to change this attitude,” Brownridge once told an interviewer. “So I decided that the best way to go was to the children to develop a future generation of conservationists.” The award-winning magazine has become a key component of NWF’s education programs, reaching an estimated 50 million young readers during the past 49 years.

“I can honestly say that I would not be such a passionate conservationist if not for the hours I spent reading and doing the activities in Ranger Rick with my parents,” says NWF President Collin O’Mara.

Brownridge also was the impetus behind many of the Federation’s successful wildlife programs. In the early 1970s, for instance, he collaborated with federal authorities on a campaign to save our national symbol, the bald eagle, which at the time numbered fewer than 1,000 breeding pairs in the lower 48 states.

Approaching the effort with his usual businesslike manner, Brownridge found a corporate partner to fund the purchase of several hundred acres of crucial eagle habitat on the Missouri River in South Dakota, which the Federation turned over to FWS. Now called the Karl E. Mundt National Wildlife Refuge, the area hosts the largest annual concentration of wintering bald eagles in the continental United States.

Behind his desk, Brownridge displayed a plaque that read: “A turtle never gets anywhere until it sticks its neck out.” By sticking out his own neck and taking risks, Brownridge raised millions of dollars to help safeguard wildlife and introduced millions of youngsters to the wonders of nature. “He was among the most visionary conservationists of the 20th century,” says O’Mara.