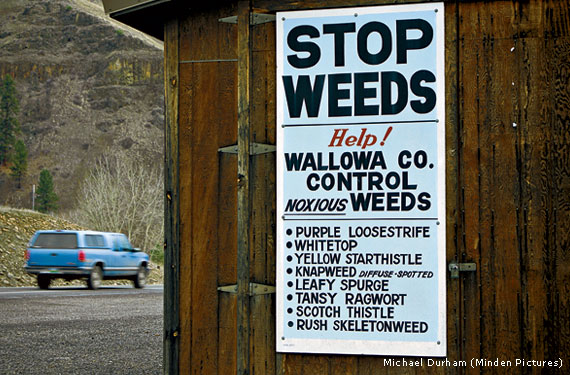 Nonnative plants are more widespread than native species in the lower 48 states, according to the first comprehensive study of the plants’ distributions. Using innovative computer-modeling techniques during a two-year period, an international team of researchers examined the U.S. ranges of 13,575 native and nonnative invasive species. The results were “very surprising,” says University of Massachusetts–Amherst biogeographer Bethany Bradley, the study’s lead scientist.

The researchers anticipated that the natives would be more widespread because they evolved in this country, but the team’s computer analyses showed that native species are, in fact, much more limited in their distributions than nonnatives. One reason why: “People aren’t moving them around as much,” Bradley says.

Reporting in the online journal Global Ecology and Biogeography, the researchers observed that the nation’s ornamental plant trade, homeowner landscaping choices and other human activities have helped exotic species overcome dispersal barriers that limit the spread of many natives. Invasives such as kudzu, oriental bittersweet, leafy spurge and others (including those on a sign in Oregon, above) also extend their ranges by outcompeting native plants for soil nutrients and other resources. “We found that even invasive species introduced in only a handful of places are now distributed all across the United States,” Bradley says. “The future may already be here.” 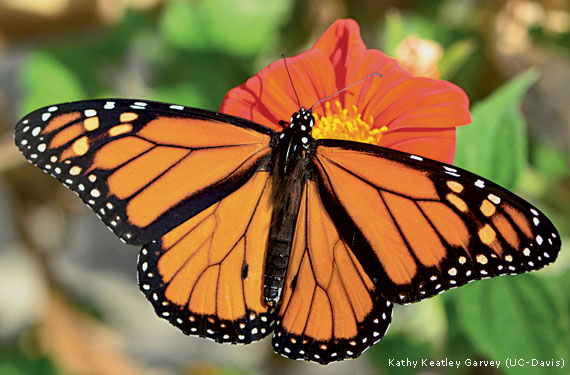 A new study of hydrogen isotopes in western monarch butterfly wings is yielding clues about where the monarchs were born—data that could help pinpoint habitat for protection.

Most monarchs that breed west of the Rocky Mountains overwinter along the California coast. Scientists from the University of California-–Davis studied the wings of 114 western monarchs (above) from four overwintering sites. They analyzed two hydrogen isotopes in the wings and compared the findings with known ratios of those isotopes in regional rainfall patterns and milkweed plants, the only food monarch caterpillars eat. “This link from precipitation to milkweed to caterpillar to wing contributes to our understanding of where the butterfly grew up,” says study lead author Louie Yang.

Reporting in Ecography, the scientists found that 30 percent of the monarchs studied grew up in California’s southern coastal range and 40 percent in the northern inland range, the first such quantitative estimate of the natal regions of overwintering monarchs and an aid to the species’ conservation. 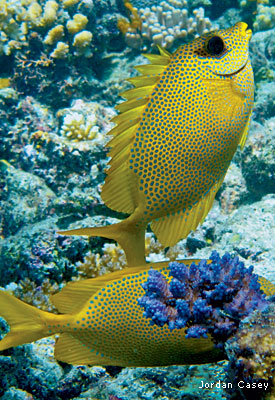 Marine biologists in Australia have documented fish displaying high levels of teamwork that were considered beyond the creatures’ cognitive capabilities. Based on year-long field observations of four species of rabbitfish on Australia’s Great Barrier Reef (including coral rabbitfish, left), researchers from James Cook University revealed last fall in Scientific Reports that the fish pair off and take turns standing guard to watch for predators while the other one eats.

Twenty-eight species of rabbitfish range in coastal waters throughout much of the Indo-Pacific. These fish are particularly vulnerable to predation while grazing for algae and other foods. But in pairs, they perform what the biologists call “coordinated vigilance.” In effect, “they literally watch each others’ backs,” says Simon Brandl, the study’s lead author.

While other scientists have recorded examples of reciprocal cooperation in a number of highly social birds and mammals, this study is the first to document such behavior in a type of fish. “Our evidence shows that cooperation may not be as exclusive in the animal kingdom as previously assumed, Brandl says. 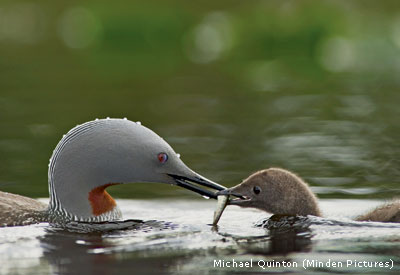 Red-throated loons (right) breed farther north than any other loon species, often nesting on fishless Arctic lakes that test the birds’ parenting skills. To feed their hatchlings in that harsh environment, adult loons can make nearly a dozen round-trip flights daily to the ocean, sometimes flying as far as 12 miles each way.

In a study of the birds during nesting season near the Chukchi Sea off Alaska, U.S. Geological Survey (USGS) scientists discovered that the chicks grow about 60 percent faster than the researchers expected. Writing in The Auk: Ornithological Advances, they report that the youngsters also are capable of leaving their nesting lakes and flying to the sea long before their bodies and wing feathers are fully developed.

As soon as they can, the fledglings go to the food so their parents no longer have to bring it to them. “In red-throated loons, natural selection seems to have lightened the load of parents raising chicks,” says USGS biologist Daniel Rizzolo.