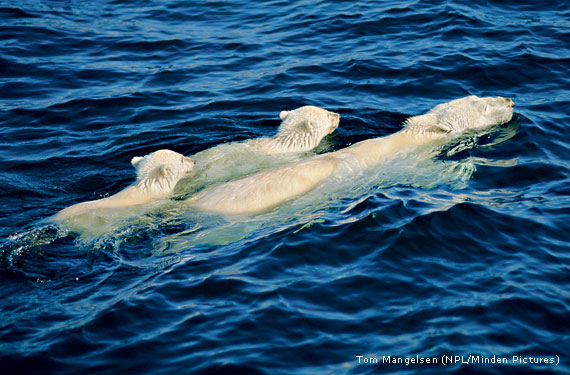 Swimming for Their Lives

Polar bears generally avoid swimming long distances in the open sea, but increasingly they have no choice. A five-year study by scientists at the University of Alberta and San Diego Zoo Global finds that as Arctic sea ice melts faster and farther offshore in summer, the bears have to swim longer distances to find ice and prey.

Using satellite telemetry to follow bears in the Beaufort Sea and Hudson Bay (above) between 2004 and 2012, the scientists learned that when Arctic sea ice retreated to a record low level in 2012, 69 percent of tracked adult females swam more than 30 miles at least once—more than twice the number of bears that did so in years with slower ice melt. As the researchers report in Ecography, the youngest, oldest and skinniest bears are far more vulnerable to drowning. “We can expect increased mortality,” says lead author Nicholas Pilfold. 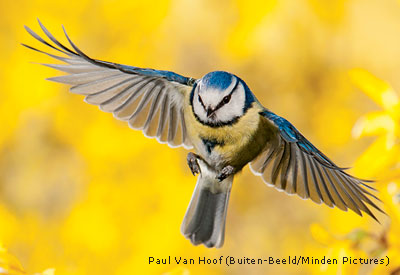 Researchers from three universities in Sweden have for the first time determined that passerines, or perching birds, have the fastest eyesight of any vertebrates in the animal kingdom. In laboratory tests of three species—the blue tit (right), collared flycatcher and pied flycatcher—the researchers measured the number of changes per second that each animal can perceive with its eyes. Though passerines do not have the powerful visual acuity common to eagles and other birds of prey, the small birds’ vision—twice as fast as human eyesight—allows them to track flying insects, then predict the insects’ next moves in order to capture them. This ability to do “forward planning,” say the researchers, also helps the birds fly through thick shrubbery without hitting branches while escaping from predators. Essentially, the Swedish group observes in PLOS ONE, passerines “see the world in slow motion compared to how people see it,” a skill that generally may be more typical in birds than visual acuity. 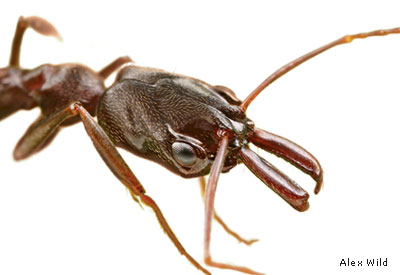 While their common name stems from their large mandibles, which they use to capture prey, trap-jaw ants now have another claim to fame: Wielding speedy antennae, they are the fastest boxers ever recorded, say entomologists from the University of Illinois and the North Carolina Museum of Natural Sciences. The researchers came to that conclusion after studying four of the dozens of species in the genus Odontomachus that range in tropical and subtropical regions throughout the world. Using high-speed cameras, they measured the rate at which the ants strike one another with their antennae during “boxing” bouts to determine hierarchy within a colony. “With social insects, we often focus on their chemical communication system,” says University of Illinois entomologist Andrew Suarez. “But in these ants, the antennal boxing was too remarkable to ignore.”

In the study, the insects’ punching power ranged from 19.5 strikes per second for a Cambodian species to a furious 41.5 strikes per second for a species native to Florida, Odontomachus brunneus (above). As the entomologists point out in the journal Insectes Sociaux, understanding such fights for dominance within ant colonies sheds new light on the insects’ behavior and sociology. 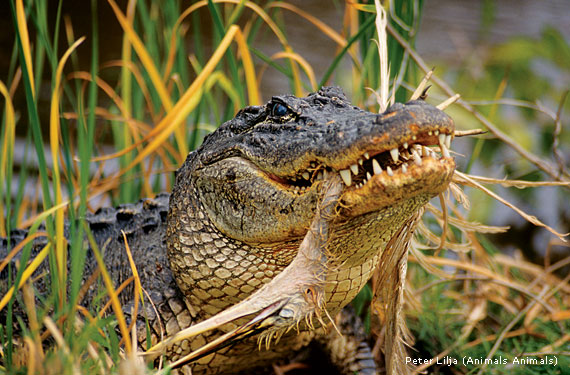 In the Florida Everglades, colonies of wading birds such as egrets and herons often nest in trees above alligator-inhabited waters. The reptiles keep raccoons and opossums from preying on the birds. In return, according to University of Florida biologists, the gators get a much-needed seasonal supply of food (such as heron chicks or adults, above).

Adult wading birds, the biologists report in PLOS ONE, typically hatch more chicks than they can feed, and one or two nestlings usually die and end up in the water. “We estimate that in years with especially high bird nesting, most of the breeding female alligators in the Everglades could be supported during the four-month dry season by dropped chicks alone,” says lead author Lucas Nell. Alligator breeding season, he adds, begins only weeks after bird breeding season, and well-fed female gators likely lay more eggs. The scientists found that gators living near bird colonies are fatter and healthier than those in other areas without birds—the first study to show a mutual benefit between nesting birds and a crocodilian.

Bumble bees rely on learning to locate flowers that provide nectar. But a recent study by Canadian and British pollinator experts finds that low levels of pesticides called neonicotinoids may adversely affect the insects’ learning skills. Previous studies of honey bees found that exposure to these pesticides can impact the memory area of the bees’ brains. Based on field observations in Great Britain, the new study explores how those chemicals may prevent bumble bees from foraging for food efficiently. The pesticides “modify the way in which information flows through the nervous system,” says University of Guelph professor and study coauthor Nigel Raine. Writing in Functional Ecology, the team concludes that current levels of neonicotinoid exposure could change the way bumble bees interact with wild plants by preventing the bees from learning how to extract nectar and pollen—a service crucial for plant pollination.