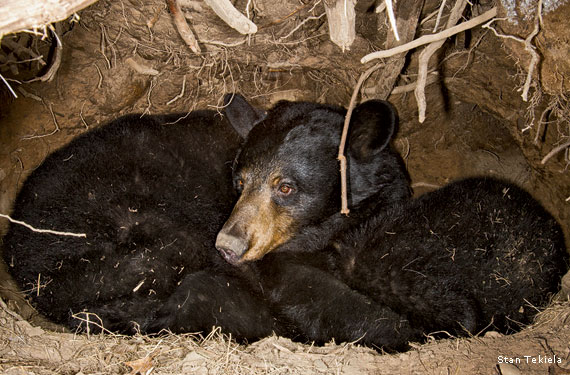 Black bears (like those above in a den in Wisconsin) spend as long as six months each year curled up in a state of hibernation. Yet when they wake up and stretch their legs in the spring, their bones show no ill effects of the inactivity. Recent research by scientists at Colorado State University (CSU) finally may have solved the puzzle of how these creatures maintain their strong skeletal structures.

For a long time, many experts thought that during winter denning, the bears’ internal systems increased bone-rebuilding activity. But in studies of 13 black bears over four winters, the CSU researchers found that the animals’ blood levels of enzymes related to bone formation and resorption actually dropped considerably during hibernation. That discovery, they write in The Journal of Experimental Biology, suggests that the animals’ systems automatically sustain skeletal structures by suppressing bone loss rather than regenerating new bone material.

“Hibernating bears are metabolic marvels,” says the study’s lead author, Seth Donahue, adding that the animals appear to be immune to two major human epidemics sweeping across the world: obesity and inactivity. “We could learn a thing or two from these fantastic creatures.” Biologists long ago established that common loons (left, in Wisconsin) return every spring to the same nesting sites across Canada and the northern United States. Now, a long-term study reveals for the first time that the birds are similarly faithful to their wintering sites.

Common loons have a large winter range that includes coastal areas in much of North America. During the course of 15 years, scientists from the Biodiversity Research Institute (BRI) in Maine used satellite tracking and other methods to investigate the birds’ winter-site fidelity at locations in Louisiana, Maine, California and Washington. Publishing in The Condor: Ornithological Applications, they report that the birds returned annually to the same places 85 percent of the time—information that has important implications for wildlife and habitat managers. “Our finding was one of the last key unknowns about common loon natural history,” says BRI scientist James Paruk. Vocal mimicry is widespread among birds, but until recently, no scientist had ever documented a bird using it to scare away predators. In the first study of its kind, biologists at Australian National University (ANU) report that one of Australia’s smallest birds, the brown thornbill (right), can imitate the raptor-warning calls of several other bird species. In doing so, it can protect its young from one of its primary nest predators, the crowlike pied currawong.

Purely by accident, the researchers discovered the thornbill’s mimicry during an experiment on various birds’ reactions to seeing a stuffed owl in the wild. “I was puzzled because I could hear the alarm calls of robins, honeyeaters and rosellas, but I couldn’t see any,” says ANU biologist Robert Magrath. “I soon realized that a brown thornbill was mimicking the other species.”

The deception works because currawongs fear hawk attacks and therefore apparently eavesdrop on other birds’ alarm calls. They will leave an area if they hear warnings that hawks may be present. “It’s very cunning,” says the study’s lead author, Branislav Igic. 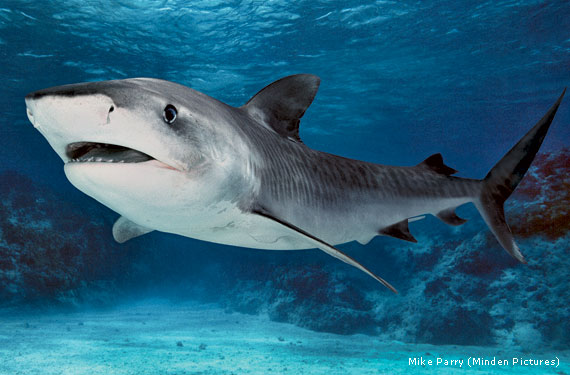 Among the largest predators on Earth, tiger sharks (above, in Australia) have long been considered a coastal species. But as a result of the first continuous, multiyear satellite-tagging study of the species, marine scientists at Nova Southeastern University (NSU) in Florida have discovered that the creatures follow remarkable—and previously unknown—migration patterns.

Sharks in the study, published in Scientific Reports, made 4,600-mile, round-trip journeys every year between two vastly different ecosystems: the coral reefs of the Caribbean and the open waters of the mid-North Atlantic. “These repeated journeys were very unexpected,” says NSU scientist James Lea, noting that it is quite rare among sharks to habitually move between two such different environments. With tiger sharks declining, the discovery is significant. Understanding how these predators use the oceans is the first step toward developing effective conservation strategies to protect them.

Read More News of the Wild
Hibernation: The Big Sleep
Secret Lives of Loons
Other Animals that Use Mimicry
Tiger Sharks and Grey Wolves: Separated at Birth?