NWF and its affiliates celebrate a fruitful year for conservation 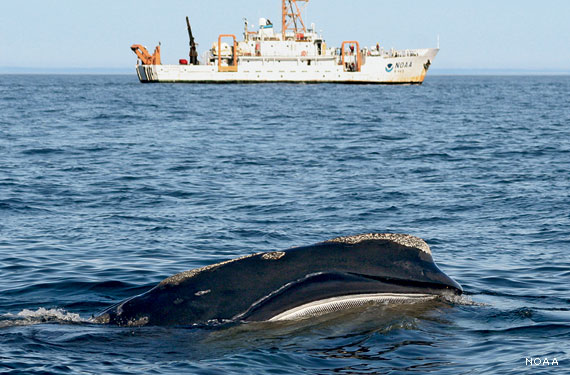 The Power of Clean Energy

In August, President Barack Obama and the U.S. Environmental Protection Agency (EPA) announced the Clean Power Plan, placing the first limits on carbon pollution from existing fossil-fuel fired power plants. The plan allows states to determine how they will cut carbon pollution, using tactics such as reducing the amount of coal plants burn or increasing use of solar and wind energy. Overall, the plan will cut carbon emissions by 32 percent from 2005 levels by 2030.

NWF and many of its affiliates worked for nearly a decade to support reducing carbon pollution from power plants, which generate about a third of U.S. greenhouse gas emissions. EPA received more than
4.3 million comments on the proposed rule, including more than 130,000 from NWF supporters. “The Clean Power Plan’s flexible, achievable, science-based rules represent real progress for protecting fish, wildlife and America’s outdoor heritage from the worst impacts of climate change,” says NWF President Collin O’Mara.

In a related effort, NWF released Wildlife in Hot Water, a report detailing strategies to protect waterways from climate change. These include curbing dirty-fuel projects while expanding the use of renewable energy. One example: NWF mobilized support for the Block Island Wind Farm—the nation’s first offshore wind-power project—which broke ground off Rhode Island in July. The project’s developer, Deepwater Wind, worked with NWF and other partners on measures to protect endangered Atlantic right whales during construction, such as limiting noise and reducing vessel speeds to avoid whale-vessel collisions. Go to www.nwf.org/energy-and-climate. 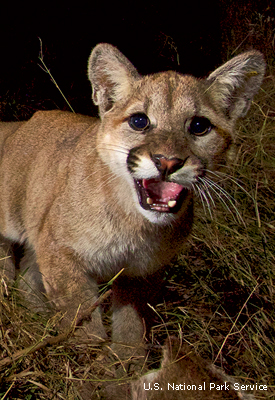 With encouragement from thousands of NWF supporters, the California Coastal Commission voted unanimously to grant $1 million toward constructing a wildlife crossing over California’s U.S. Highway 101 at Liberty Canyon. This route has been deadly for wildlife, including mountain lions trying to disperse from the nearby Santa Monica Mountains. One such lion was killed on a California highway in August.

“Mountain lions and other wildlife need large landscapes to roam; it doesn’t work anymore to set aside small islands of habitat,” says NWF California Director Beth Pratt-Bergstrom. “This crossing would reconnect the ecosystem of the Santa Monica Mountains.”

The crossing’s total cost will be about $30 million. Through NWF’s “Match the Million” challenge, Federation supporters have raised more than $100,000 for the passage, in part by texting “LION” to 25383, which automatically makes a $10 donation to the effort by adding that amount to the donor’s phone bill.

Go to www.savelacougars.org to learn more and see videos of California mountain lions. 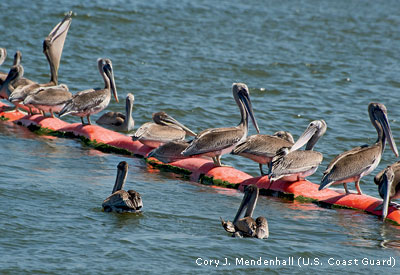 Protections and hope restored for the Gulf of Mexico and many U.S. lakes, wetlands and streams

In July, more than five years after the Deepwater Horizon drilling rig exploded and dumped millions of gallons of crude oil into the Gulf of Mexico, BP agreed to pay $18.7 billion in penalties. As much as $16 billion of this money could be used for environmental restoration, the largest such fund in U.S. history.

NWF strived for two years to gain passage of the RESTORE Act, which passed in 2012 and ensures that a significant portion of the U.S. Clean Water Act fines BP pays will be dedicated to restoring Gulf coastal habitat, including wetlands, oyster reefs and barrier islands (such as Queen Bess Island, a nesting area for brown pelicans). “Our job now is to work with state and federal agencies to try to make sure these funds get spent on projects that accomplish the most for Gulf wildlife,” says David Muth, director of NWF’s Gulf Restoration Program.

In another victory for water, the governors of Ohio and Michigan and the premier of Ontario, Canada, pledged in June to cut the amount of phosphorus flowing into Lake Erie from farms and other sources by 40 percent during the next decade. Such excess nutrients feed harmful algal blooms, including one in August 2014 that poisoned western Lake Erie and the drinking water for nearly half a million Ohio residents. NWF pushed for this 40 percent reduction for two years.

That announcement came not long after the U.S. Environmental Protection Agency and U.S. Army Corps of Engineers finalized the Clean Water Rule in May. NWF and many of its state affiliates rallied support for the rule, which restores Clean Water Act protections to millions of acres of wetlands and 60 percent of the nation’s stream miles. 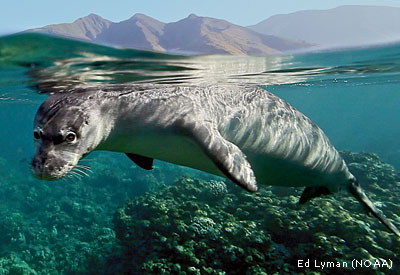 In August, the U.S. National Oceanic and Atmospheric Administration’s (NOAA) National Marine Fisheries Service designated almost 7,000 square miles, mostly off Hawai‘i’s main islands, as critical habitat for the endangered Hawaiian monk seal. The ruling requires federally funded or permitted projects to avoid dredging, construction or other activities that might pollute, degrade or destroy important seal foraging, pupping and resting areas. With only about 1,100 monk seals remaining and the population falling about 3 percent per year, these animals are among the world’s most endangered marine mammals.

“Protecting coastal and marine habitat for the Hawaiian monk seal is also good for Hawai‘i’s people, culture and economy,” says Marjorie Ziegler, executive director of the Conservation Council for Hawai‘i (CCH), an NWF affiliate. “The critical-habitat rule does not restrict public access to our beaches and ocean—people can still swim, surf, snorkel, fish and gather.”

CCH has been working with NWF and other organizations for the past four years on behalf of the monk seal. This has included building support for the critical-habitat designation and funding for NOAA Fisheries’ Hawaiian Monk Seal Recovery Program. CCH and NWF are also helping to protect the seals by educating residents that these endangered mammals are a native species and not competitors for anglers’ fish. Find out more at www.conservehi.org.

The Federation provided more than 30,000 native tree seedlings to U.S. families, classes and cities to plant in communities nationwide. www.nwf.org/trees 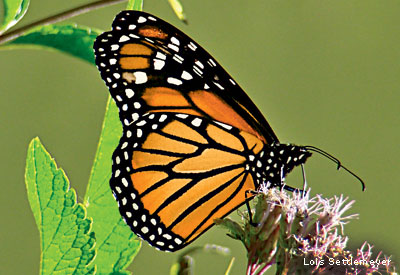 In June, NWF led more than 30 conservation and gardening organizations to form the National Pollinator Garden Network and launch the Million Pollinator Garden Challenge, asking gardeners to plant 1 million gardens nationwide to help butterflies (such as the monarch, left), bees, bats and other struggling pollinators. Hundreds of thousands of such gardens have been planted to date. NWF, the Disney World Wildlife Conservation Fund and Botanical Interests also provided milkweed seeds to 42,000 kids and their families who pledged to be NWF Butterfly Heroes™ by planting pollinator-friendly plants. www.nwf.org/pollinators

Barbed wire fencing is nearly invisible and therefore deadly to low-flying greater sage-grouse. In August, NWF staff and Montana Conservation Corps youth installed nearly 30,000 flags over 22 miles of wire fence in eastern Montana, making the wire more visible and potentially reducing the rate of fatal bird collisions by more than 80 percent. For 10 years, NWF, the Wyoming Wildlife Federation and other affiliates have provided input on national and state plans to rebuild the bird’s populations and its declining sagebrush habitat. www.nwf.org/sagegrouse

Through its Great American Campout™ program, NWF inspired more than 100,000 people to pledge to camp outdoors and reconnect with nature. www.nwf.org/campout

Securing a Home on the Range 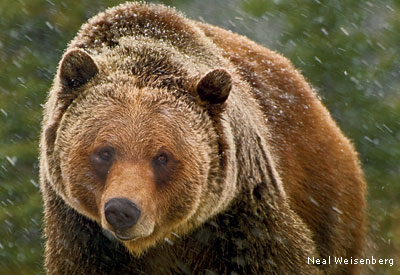 NWF’s Adopt a Wildlife Acre program reduces potential conflicts between cattle and sheep ranchers and wildlife—including bighorn sheep, wolves and grizzly bears (right)—by compensating landowners who retire their grazing allotments on public lands. More than 275,000 grazing acres near Yellowstone National Park were retired in 2015, bringing the total acreage in the Greater Yellowstone Ecosystem that NWF has returned to wildlife through this program to about 861,000 acres. www.nwf.org/wcr

On August 7, President Barack Obama signed the Sawtooth National Recreation Area and Jerry Peak Wilderness Additions Act, designating more than 275,000 acres in central Idaho as wilderness. In February, Obama designated Colorado’s Browns Canyon as a national monument, protecting its 22,000 acres and 14 river miles from development. NWF, its affiliates and other partners have worked for more than a decade to help secure protections for these public lands, which are treasured recreation areas that provide critical habitat for western wildlife, including mule deer, pronghorn and trout. www.nwf.org/publiclands

NWF and partners are working to bolster Massachusetts’s Great Marsh and nearby communities from climate change impacts such as violent storms and sea-level rise. This past summer, 22 fourth-graders planted 2,000 shoots of native grasses on dunes. Another 50 students planted eelgrass to stabilize eroding tidal flats and provide nursery habitat for marine wildlife, including native rock crabs, scallops and fish. www.nwf.org/northeast