NWF and its state affiliates are making a difference together 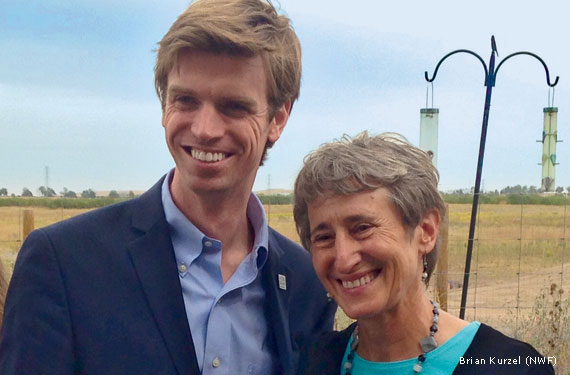 WHAT A YEAR! As I reflect on 2015, it’s clear we have a lot to celebrate. Working with our incredible state and territorial affiliates—and with support from you, our members—we made meaningful strides across our nation for hundreds of wildlife species and millions of outdoor enthusiasts over the past 12 months. So, as our founder J. N. “Ding” Darling was fond of saying, “On behalf of wildlife that cannot speak for themselves, thank you.”

Here are just a few of the many shared successes accomplished by our National Wildlife Federation family this year.

Together, we secured protections for millions of miles of streams and tens of millions of acres of wetlands that support critical waterfowl and fisheries habitat. We helped win the largest environmental court settlement in American history to restore habitat in the Gulf of Mexico for sea turtles, dolphins and brown pelicans, all affected by the BP oil spill. We helped the leaders of Michigan, Ohio and Ontario reach agreement on reducing phosphorus that enters Lake Erie and causes harmful algal blooms. And while supporting the nation’s first offshore wind-power project (under construction near Block Island, Rhode Island), we helped ensure that endangered North Atlantic right whales would be protected throughout development.

With bipartisan collaboration and strong affiliate leadership, we helped pass legislation to protect Idaho’s Sawtooth National Recreational Area, including the Boulder-White Clouds peaks, one of my favorite places to hike and flyfish and the location of our annual July Sun Valley adventure. We secured permanent protections for Browns Canyon in Colorado, we improved coastal resilience of marshes in New England, and our Hawai‘i affiliate helped expand critical habitat for endangered monk seals. In a major effort with state affiliates, sportsmen across the West fought off more than 20 pieces of state legislation that would have transferred or sold federal public lands. And working with scores of partners across 11 states, we helped develop conservation plans to restore greater sage-grouse populations and their sagebrush habitat that supports over 300 other species such as pronghorn, mule deer and elk.

As part of our goal to restore declining pollinator populations, we worked with the White House and many partners to launch the Million Pollinator Garden Challenge, our Butterfly Heroes™ campaign and the Mayors’ Monarch Pledge, all of which enlisted the help of millions of Americans to grow native plants that will benefit butterflies, bees and other pollinators. Collaboration among public and private partners also helped us push passage of the Clean Power Plan, which will reduce climate-disrupting carbon pollution from power plants. And we helped more than 3 million children in 8,500 schools learn about nature through our Eco-Schools and Schoolyard Habitats® programs.

I’m not suggesting that our work is done—far from it. With thousands of species of wildlife facing potential extinction across the United States in the coming decades and the average American kid spending more than 50 hours a week in front of a screen, we have miles to go before we sleep. But because of generous supporters like you, we are making progress for wildlife every day. So let me end by simply saying thank you for your ongoing support of the National Wildlife Federation. These wildlife victories belong to you.