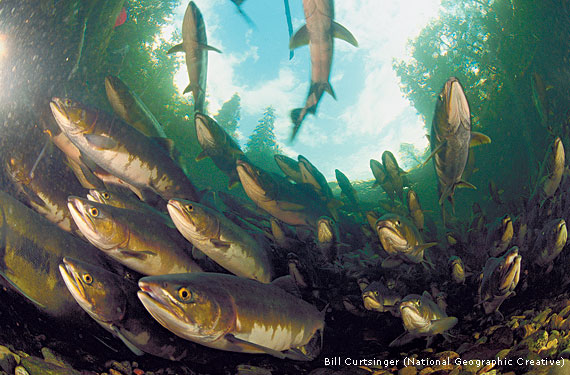 When pink salmon and herring populations crashed in 1993 in Alaska’s Prince William Sound, scientists had little evidence linking those events to the disastrous Exxon Valdez oil spill four years earlier. But a study published in Scientific Reports by NOAA Fisheries experts indicates that the spill may have had a much greater impact on spawning pink salmon (above) and other fish than previous investigations found.

Based on their studies, the scientists determined that subtle changes in heart formation have delayed but important consequences for the survival of first-year salmon and herring after an oil spill, leading to future declines of their wild populations. Such findings will contribute to more accurate assessments of the impacts of future spills. “Now we have a better idea of what we should be looking for,” says Incardona.

Riparian areas in California’s Central Valley provide critical spring and summer breeding habitat for many U.S. birds that winter in the Tropics. Now, in a landmark eight-year study, biologists at the University of California–Davis (UCD) have found that the region also is a crucial wintering ground for birds that migrate south from Canada’s boreal forest. Writing in The Condor: Ornithological Applications, the researchers report that just as many species (about 125) use the California riparian habitats in winter as in summer, and bird diversity is greater in the Central Valley in January and February than from April to June.

While conservationists have long recognized the value of riparian habitat to birds during the breeding season, “there’s this whole other season that we haven’t been giving nearly as much attention,” says Kristen Dybala, the study’s lead author. By one estimate, at least a billion boreal-breeding birds winter in the lower 48 states, including many species suffering declines such as the varied thrush and white-crowned sparrow. The UCD researchers believe that similar winter analyses conducted in other U.S. regions would produce similar results, confirming the importance of winter habitat to songbird survival.