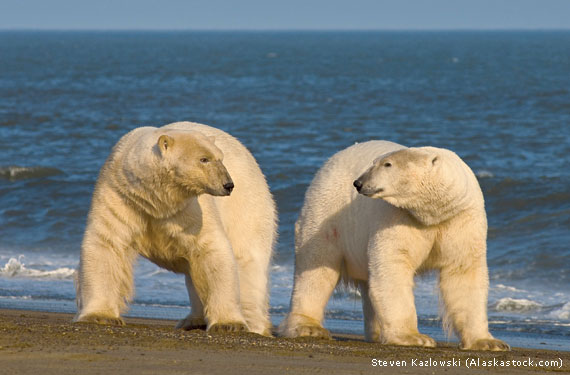 TWO MASSIVE MALE POLAR BEARS share a friendly face off as they roam Alaska’s Barter Island off the coast of the Arctic National Wildlife Refuge (ANWR). The ice-free Beaufort Sea behind them signals a shift in climate and vulnerability for the bears, which depend on sea-ice platforms for hunting marine life. Less able to reach prey, polar bears depend on whale carcasses left over from subsistence hunts, “so their relationship with people is extremely important,” says long-time Arctic photographer Steven Kazlowski.

On this trip, Kazlowski had been camping 50 miles to the west when he saw two “monster” bears. One night he felt a paw press down on the tent. His screams scared away the intruder, but Kazlowski believes these two bears are the same giants he had seen earlier. “I was lucky they were fat bears,” he says, “and well fed.”

The National Wildlife Federation knows it will take more than luck to save Arctic species, one reason why it has long lobbied on behalf of ANWR, which it calls a “crown jewel” in need of permanent protection.