NWF strives to increase wildlife populations within a generation 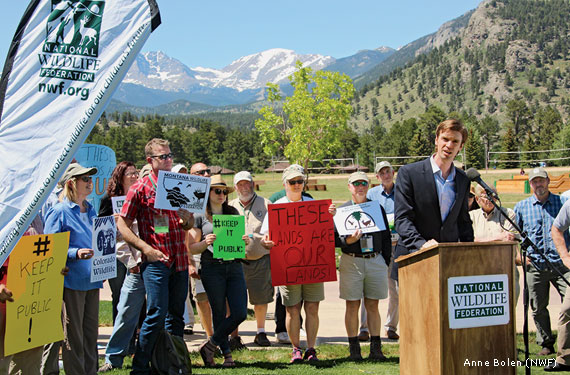 At the Federation’s annual meeting in Colorado, NWF President Collin O’Mara urges protections for public lands, which are critical to restoring at-risk wildlife.


AT OUR 80TH ANNUAL MEETING THIS PAST JUNE, the National Wildlife Federation’s state and territorial affiliates unanimously adopted a bold new vision for helping our nation’s wildlife to not only survive but to thrive in a rapidly changing world. To make this vision a reality, we will mobilize a conservation army of 75 million Americans—and we need your help.

Across our nation, many great conservation initiatives are underway, but they are inadequate to overcome the scale of the challenges confronting wildlife. Today, about a third of all America’s wildlife species are at risk, facing threats such as habitat fragmentation and degradation, drought, water pollution, invasive species and wildlife diseases—all of them exacerbated by a changing climate.

In some ways, this crisis could not come at a worse time. Though wildlife face greater challenges now than at any time since the beginning of the past century, public opinion polls show environmental issues now rank low compared with other problems confronting our country. Our national politics are horribly fractured, and America’s electorate is increasingly disconnected from nature. By way of comparison, President Theodore Roosevelt famously said in 1912 that “there can be no greater issue than that of conservation in this country.” Yet in this year’s presidential campaign, we have heard few mentions of conservation. As my friends and noted conservationists Stephen Kellert of Yale University and Steven Williams of the Wildlife Management Institute have said, we face a crisis of relevance.

On the other hand, we understand the challenges confronting wildlife better now than at any time in history, and we are rapidly developing scalable solutions. These include innovative approaches to restoring habitat corridors and waterways, connecting parks and other protected areas, and increasing habitat on working lands and in cities.

Adding urgency to this work, tens of millions of citizens are experiencing drinking-water crises, record forest fires, prolonged droughts, extreme weather events and other dire problems that result from decades of underinvestment in our natural resources. We must show how conservation is vital to addressing all of these crises—and in doing so, make wildlife and nature more relevant for all Americans.

We ask you to join us in our new vision of flourishing wildlife populations across America within a generation. In the process, we will create a conservation army unlike anything the nation has ever seen, ensuring that wildlife do indeed thrive in our rapidly changing world.