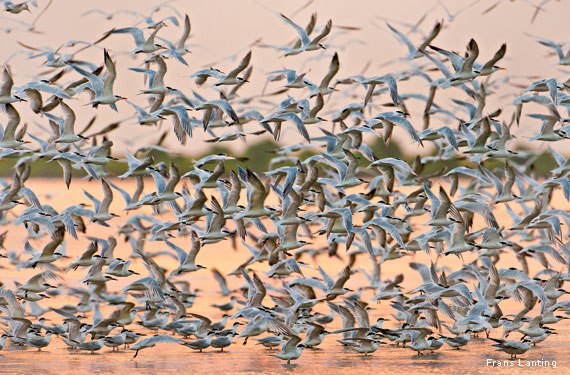 New Insights on Birds in Flight

Armed with innovative tools, scientists are making some surprising discoveries about bird behavior during spring migrations.

In Sweden, biologists from Lund University used telescopic devices with laser rangefinders to measure flight speeds of different tern species (such as sandwich and royal terns, above). Reporting in Philosophical Transactions of the Royal Society B, they note that factors such as wind direction and wing shape affect velocity. One surprise: The scientists document, for the first time, that flock size affects flight speed. The larger the flock, the faster birds fly, a principle that likely applies to all bird species.

New visualization software is allowing researchers to analyze data from weather surveillance radar systems on a scale never before used in avian flight investigations. “Many migration studies look at a few individuals,” University of Oklahoma ornithologist Kyle Horton reports in The Auk: Ornithological Advances. “But with radar, we’re now documenting the behavior of millions of individuals at given times in different seasons.”

In a recently completed study, Horton and his colleagues documented for the first time that birds migrating north after winter fly much faster and put more effort into staying on course than they do during autumn flights south. The study, which focused on songbirds flying over the eastern U.S. seaboard, found that the birds travel an average of 39 percent faster in spring than in fall. The researchers speculate that the birds are racing to claim the best breeding sites. “By grabbing the best spots,” Horton says, “those birds can attract fitter mates and raise more chicks.”

In a separate study in the Great Lakes region, researchers from the University of Delaware used weather radar to examine bird behavior over water at night, when many species travel. Their data, reported in The Auk, show that spring migrants flying over the lakes increase their elevation as dawn approaches to gauge the distance to the far shoreline, and they often turn back to the closest land rather than continue to fly north in daylight.

As a result, large masses of birds can pile up at stopover sites along the southern shores of the lakes. “Our study justifies the high value of shoreline habitats for conservation of migratory bird populations in the Great Lakes,” says biologist Jeff Buler. 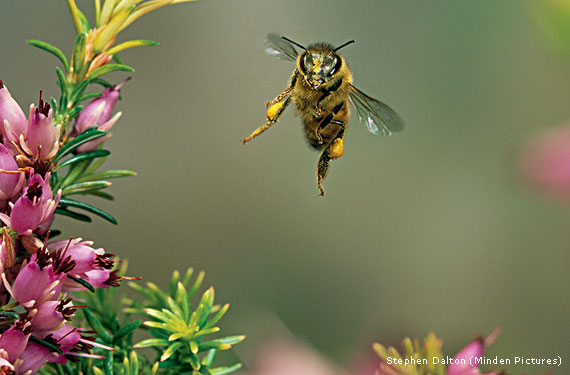 Native bees and honey bees (above) rely on wind-borne floral scent molecules to lead them to pollen-producing plants. “Many insects have nests that are up to 3,000 feet away from food sources, which means that scents need to travel long distances before insects can detect them,” says Pennsylvania State University meteorologist Jose Fuentes. He and his colleagues discovered that atmospheric contaminants such as ozone cause chemical interactions that reduce the life spans of the plants’ scent molecules and the distances they travel. Reporting in Atmospheric Environment, the researchers write that pollution-modified plant odors can confuse bees, increasing the time bees must forage while decreasing their pollination efficiency and the amount of food they bring back to a colony. The discovery adds to a growing list of factors that may be contributing to bee declines.

Birds of a Feather
Endangered Migrations
Migration: Flyaways and Corridors
On the Trail of Native Bees
Being There for Bees