A photographer captures an image of a rattlesnake on the alert 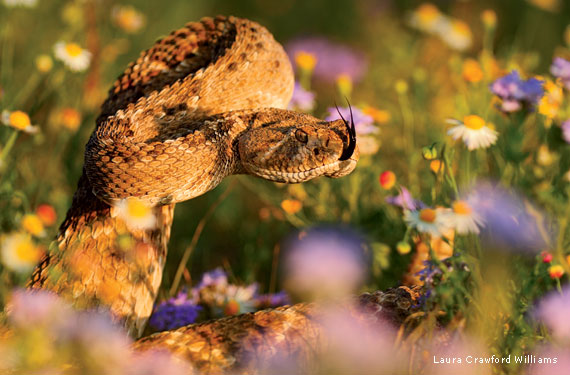 TONGUE SNIFFING THE AIR and poised to strike, a hefty western diamondback rattlesnake inspired respect—if not caution—as nature photographer Laura Crawford Williams spotted it on a ranch near Laredo, Texas. “Its body had the girth of one of those large salamis that hang in delis,” says Williams, who noticed this 5-footer facing off against another rattler nearby. Captivated by the late-day April light and the wreath of wildflowers, Williams felt no fear: “If I see a nice moment, the fight-or-flight part of my brain completely disappears,” she says. But she had backup: “My partner was always watching my back and keeping track of the other snake.”

A professional photographer for 20 years, Williams works extensively in South America, using her images to promote conservation, particularly in Patagonia. “I try to get images that aren’t just portraits but portray behavior and give the viewer a sense of emotion,” she says. Mission accomplished with this virile viper.