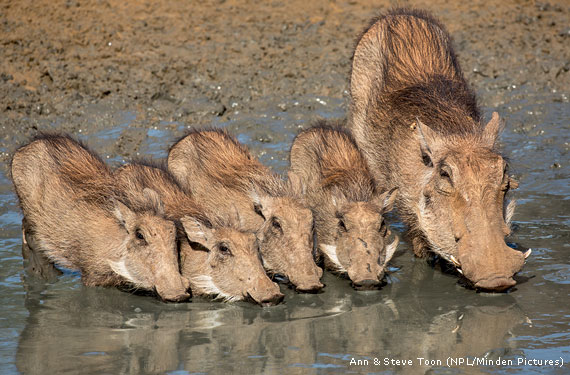 Researchers have long known that several animals, including pigeons and bats, have internal compasses that use Earth’s magnetic field to guide their movements. Now scientists have discovered the first evidence that two types of swine—boars and warthogs (above)—also possess such compasses.

In a lengthy study in which they observed nearly 3,000 of the animals in the wild in the Czech Republic and six African countries, a group of European investigators found that the creatures display a “highly significant north-south preference in their body alignment” while foraging and resting, regardless of season, weather or time of day. “Magnetic navigation represents an ideal strategy for species that need to react to environmental changes quickly,” the biologists report in Mammal Review. After considering other possibilities, they conclude that the swines’ proclivity to follow Earth’s north-south axis—or “magnetic alignment”—can be attributed only to internal compasses. 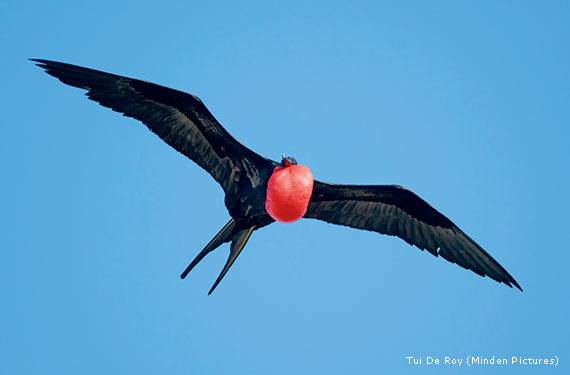 Sleeping on the Wing

For the first time, scientists have confirmed the ability of some birds to sleep while in flight. In a study of great frigatebirds, a species that can stay aloft for up to two months at a time, ornithologists at the Max Planck Institute in Germany used specially designed monitors to measure the animals’ brain activities.

Unlike other seabirds, frigates do not have waterproof plumage and avoid sitting on the ocean to feed. Instead, they rest by sleeping on the wing an average of 41 minutes per day in bursts of 12 seconds each.

Writing in Nature Communications, the researchers explain that frigates nap while circling at high altitudes in rising air currents where they don’t have to flap their wings. Other species, such as mallards, will sleep on the ground using one hemisphere of their brains while the other hemisphere remains awake to watch for predators. Frigatebirds, lead author Niels Rattenborg says, can sleep in the air using either one or both brain hemispheres simultaneously, “and they just continue soaring.”

Animal Navigators
Navigating With a Built-In Compass
Endangered Migrations
Birds of a Feather
True Colors: How Birds See the World