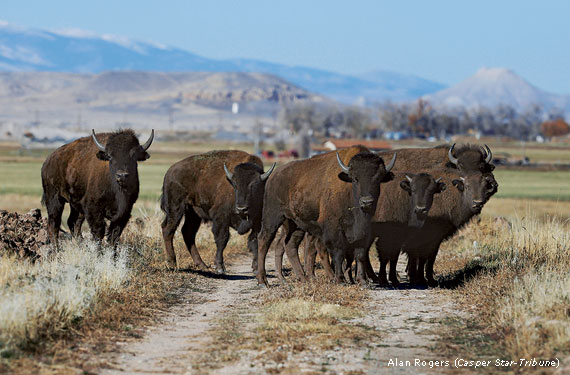 On November 3, cheers and the beating of drums welcomed 10 bison as they thundered onto the Eastern Shoshone and Northern Arapaho Tribes’ Wind River Indian Reservation in Wyoming. The return of genetically pure bison—absent for 131 years—is the culmination of decades of collaboration among the National Wildlife Federation, the Eastern Shoshone Tribe and the U.S. Fish and Wildlife Service to bring back an animal inherent to the tribes’ culture and Great Plains ecosystem.

During the past five years, NWF helped bring some 200 bison to Montana’s Fort Peck Reservation and is working to restore others to tribal lands.
Visit: www.nwf.org/tribalbison 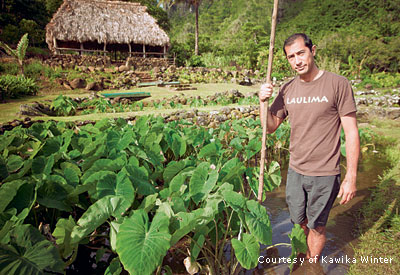 NWF has joined Second Nature, the U.S. Green Building Council and the Association for the Advancement of Sustainability in Higher Education (AASHE) to create a legion of 20 million “global sustainability citizens” by 2025. To reach this goal, colleges and universities will use AASHE’s Sustainability Tracking, Assessment and Rating System (STARS) to calculate how many of their students are learning sustainability skills, whether through their courses or by participating in one of the other organization’s programs.

As part of this effort, NWF’s EcoLeaders program will host its first virtual EcoCareer Conference February 22 and 23 to show how sustainability skills can be applied. For example, former NWF fellow Kawika Winter (above), now director of Hawai‘i’s Limahuli Garden and Preserve, teaches policymakers and residents that biodiversity is vital to the environment and culture. “Every time we lose another tree or bird,” says Winter, “that’s also a word in our native language that goes extinct, and a story along with it.”
Visit: www.nwf.org/ecoleaders 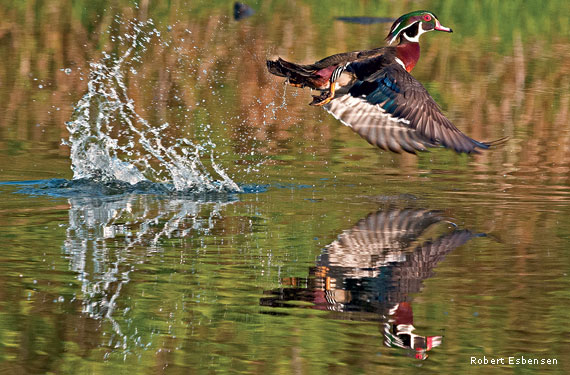 In 1967, four volunteers successfully united community members to defeat a dam planned for Illinois’ Sangamon River that would have flooded a woodland. Fifty years later, the group has grown into the Prairie Rivers Network (PRN), an NWF affiliate dedicated to restoring wildlife habitat and keeping Illinois waterways flowing and clean. “This is what happens when you get together and protect a place,” says Carol Hays, PRN executive director. “It changes the trajectory of that place and your life.”

Illinois has some 50 watersheds flowing into the Mississippi River. One way PRN helps protect these waters is by striving to reduce runoff from streets and agricultural land. It does so partly by teaching farmers how to “farm with wildlife in mind,” explains Hays, including using cover crops to minimize soil loss, reducing pesticide use and planting wheat and corn varieties that are “good for the soil and the farmer’s bottom line.”

PRN also encourages farmers and others to conserve wildlife habitat, from ponds for wood ducks (above) to native plants for pollinators. And because Illinois is within the monarch butterfly’s central flyway, PRN recently convened a diverse group to create a statewide conservation plan for the declining species.
Visit: prairierivers.org 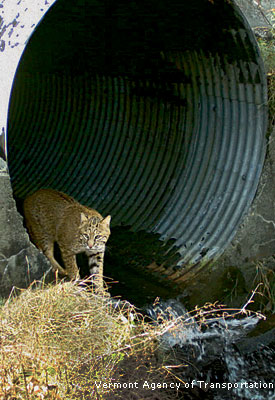 The Staying Connected Initiative (SCI), a coalition of 30 U.S. and Canadian agencies and organizations that includes NWF, its affiliate Vermont Natural Resources Council and The Nature Conservancy (TNC), is preserving forest habitat across the Northern Appalachian–Acadian region to reduce wildlife-vehicle collisions and allow animals mobility within a changing environment. SCI is partnering with the Vermont Agency of Transportation to determine how underpasses could be adjusted or built to encourage wildlife to use them.

Since 2014, SCI has examined some 418,000 images from 84 cameras posted near Vermont bridges and culverts and found while small animals ranging from river otters to bobcats (right) used the underpasses, large animals such as moose and bears tended not to do so. Also, most animals traveling through fragmented landscape were drawn to crossings with abutting forest cover. “Without that habitat connectivity on either side, there’s just not a lot of incentive for them to go that way,” says NWF Wildlife Adaptation Coordinator Melissa Gaydos.

This spring, NWF is launching an SCI project for which citizens will monitor camera traps along Vermont’s Otter Creek River, a vital wildlife corridor that also provides flood protection to 30 communities. “To really adapt to all the unknowns of a changing climate,” says TNC ecologist Paul Marangelo, “we are going to be much better off creating landscapes where animals can easily move between habitats.”
Visit: stayingconnectedinitiative.org

A Federation for Conservation

Affiliates of the National Wildlife Federation are autonomous, nonprofit organizations that take the lead in state and local conservation efforts and partner with NWF on national issues. The Federation has 50 affiliates, including in Puerto Rico, the U.S. Virgin Islands and Washington, D.C.
Visit: www.nwf.org/affiliates