When Nature Falls Out of Sync

Nature is feeling the effects of climate change, but climate-smart solutions could help natural systems adjust and adapt. 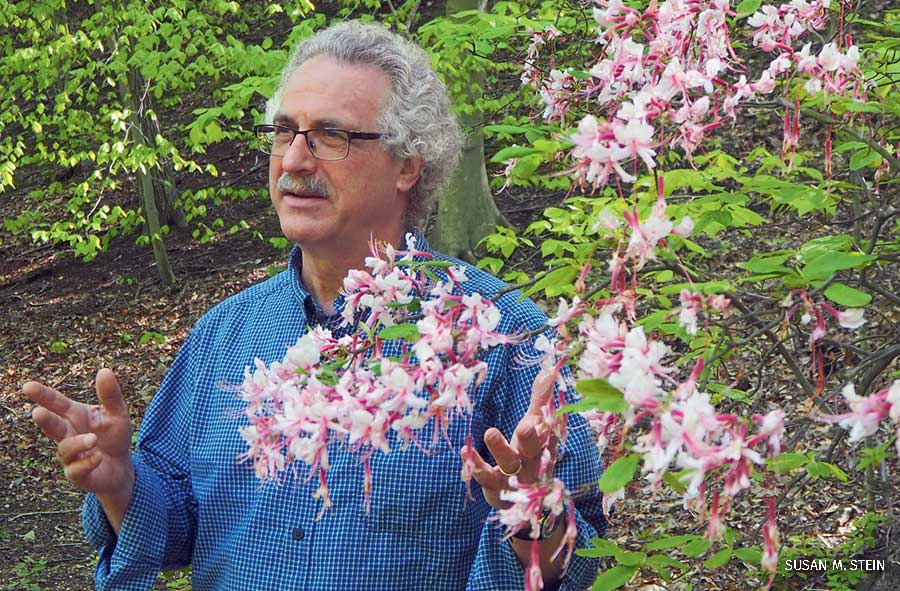 During a springtime walk near his home in Washington, D.C., botanist and NWF Chief Scientist Bruce Stein points out a native pinxterbloom azalea.

FAMOUS FOR HIS WRITINGS from Walden Pond in Concord, Massachusetts, Henry David Thoreau was an astute observer of the rhythms of nature. In the 1850s, he meticulously chronicled the first flowering dates for Concord’s wildflowers. More than 160 years later, researchers have found that flowering now occurs, on average, about 10 days earlier—a significant shift.

As temperatures rise across the globe, such seasonal shifts are now widespread. According to the USA National Phenology Network, a program that tracks the life cycles of plants and animals, spring now begins three or four weeks early in some parts of the United States.

Changes in seasonality, altered rainfall patterns and rising temperatures are having enormous consequences for wildlife—leading to shifts in species’ ranges, population declines and disruptions to finely tuned interdependencies among species such as the emergence of blooms and the pollinators they depend on for future survival. Climate change also increases ecosystem stressors such as invasive species, long-term drought and massive wildfires.

I thought of Thoreau as I hiked through a forest near my home in Washington, D.C., on an unseasonably warm day in March. I could only imagine what he would think of the profound climatic changes that are altering the fabric of our natural world—and of the ethical imperative of our need to address the climate crisis.

Confronting this crisis involves two distinct approaches. Climate mitigation refers to efforts to reduce emissions of carbon dioxide and other greenhouse gases—the underlying drivers of global warming—and ultimately achieve negative emissions by pulling carbon out of the atmosphere. Climate adaptation, in contrast, focuses on helping people and wildlife prepare for and adjust to the accelerating impacts of climate change. This dual imperative is captured by the admonition to “avoid the unmanageable and manage the unavoidable.”

The National Wildlife Federation has been at the forefront of both these endeavors. Our staff, affiliates and supporters advocate for policies and programs to slow and reverse the rate of warming, such as by protecting forests and other natural systems that sequester and store carbon. NWF has also been a leader in advancing the science and practice of climate adaptation, particularly through our work on climate-smart conservation planning, a technique for crafting management actions that reduce climate-related risks to species and habitats.

Climate change poses an existential threat to human society and to nature as we know it. For ethical as well as economic reasons, we have a responsibility to act with urgency and vigor. Thoreau would expect nothing less.

Dr. Bruce A. Stein is Chief Scientist and Associate Vice President of the National Wildlife Federation, and author of Precious Heritage, an award-winning book on the status of biodiversity in the United States.