From the remote mountains of Rwanda and coral reefs of southern Egypt to the Arctic Circle in Alaska and Yellowstone’s rugged back country, the winning images of National Wildlife magazine’s 45th annual photo competition reflect the great distances some photographers travel to experience and document the natural world. Yet many contest entrants find captivating subjects much closer to home. This year’s grand prize recipient, for example, made her striking picture of honeybees probing for water at a birdbath in her Wisconsin backyard.

Judging images on the basis of originality, technical execution and true-to-nature accuracy, the editors selected the 2015 winners from thousands of entries in seven categories: Birds, Mammals, Baby Animals, Backyard Habitats, Other Wildlife, Landscapes and Plant Life, and Connecting People with Nature. We hope you'll enjoy the following gallery of winners from our 2015 contest. 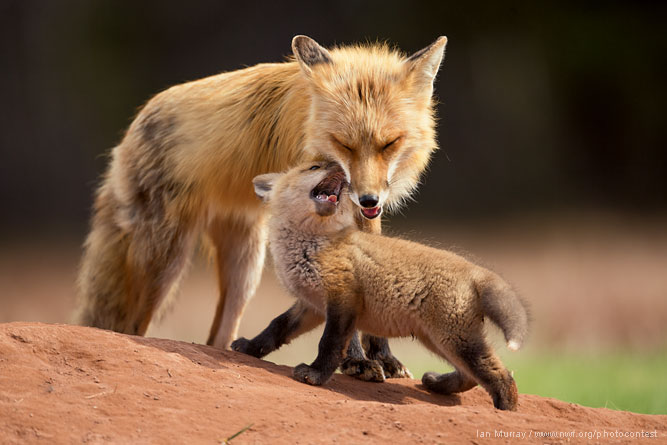 Playful and intimate, this moment between a young red fox and its mother captures what Ian Murray calls “Mom time.” This particular mom raised five pups near Canada’s Wallace River earlier this year. Murray recorded the family’s antics weekly from May through July. 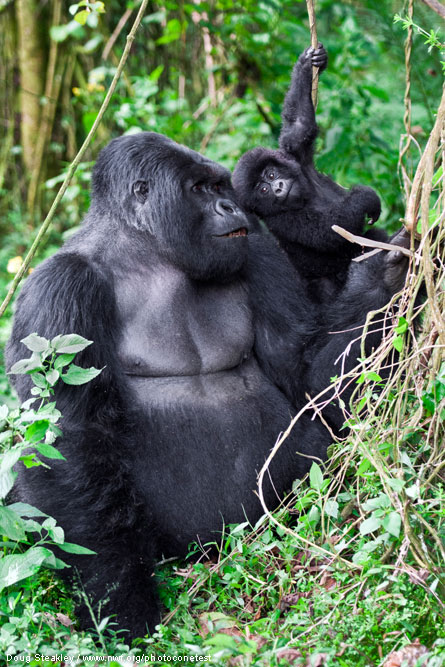 In Rwanda’s Volcanoes National Park, a male mountain gorilla exchanges a glance with a young member of the troop. “Not all silverbacks are friendly to younger gorillas, so this is a particularly touching scene,” says Steakley, a professional tour guide who has led numerous trips to observe the endangered primates in the wild. “Hiking up to see the gorillas is always an exhilarating experience,” adds Steakley, who photographed these animals from a safe distance. 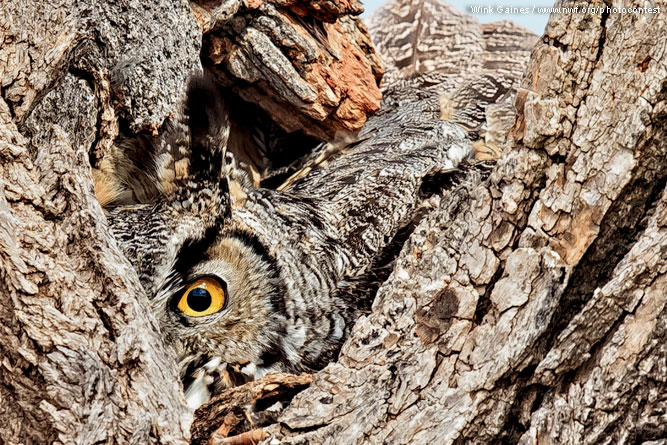 On a cold March day in Nebraska, Wink Gaines spotted feathers fluttering from the crotch of a dead tree. Peering through her camera, she saw a great horned owl—and quickly made this poignant image. 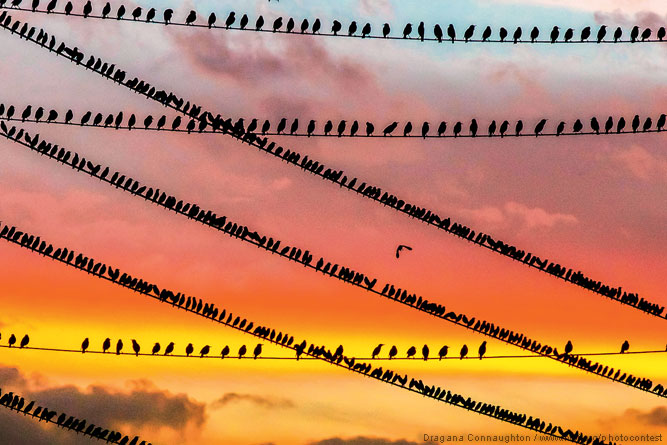 Crisscrossing a vivid sky, utility lines offer a sunset perch for a massive flock of starlings. “It looked like a scene out of Alfred Hitchcock’s movie The Birds,” says Dragana Connaughton, who spotted the scene while driving home. She stopped to capture this study of pattern and light. 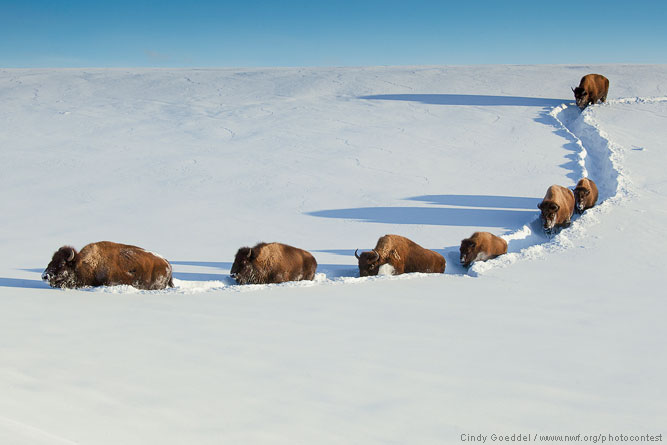 Deep snow, long shadows and a willful line of bison yield a powerful portrait of a charismatic animal in one of America’s most iconic landscapes: Yellowstone National Park in Wyoming. A professional guide and photographer, Cindy Goeddel made this image on a frigid February afternoon while leading tourists through the park, home to more than 4,000 genetically pure wild American bison. 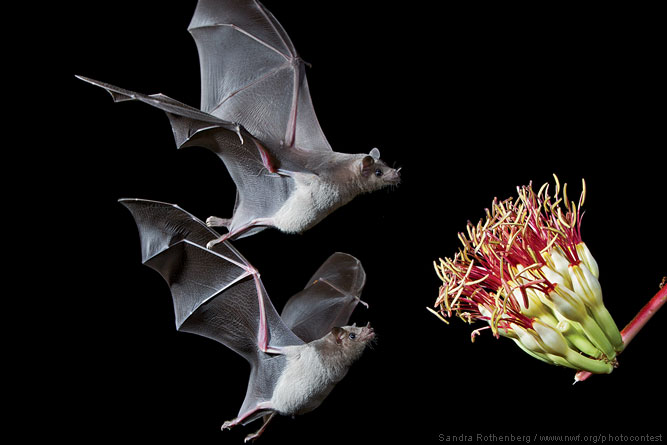 Lured by sweet nectar, endangered lesser long-nosed bats converge on an agave blossom in the desert near Tucson, Arizona—a rest stop on their fall migration to Mexico. To capture this nighttime image, yoga teacher Sandra Rothenberg added nectar to the bloom and used a camera trap with an infrared beam that tripped the shutter as the bats approached. “Photography reveals aspects of nature that might otherwise be missed,” she says, “such as the intensity of the bats’ faces and their graceful poses.” 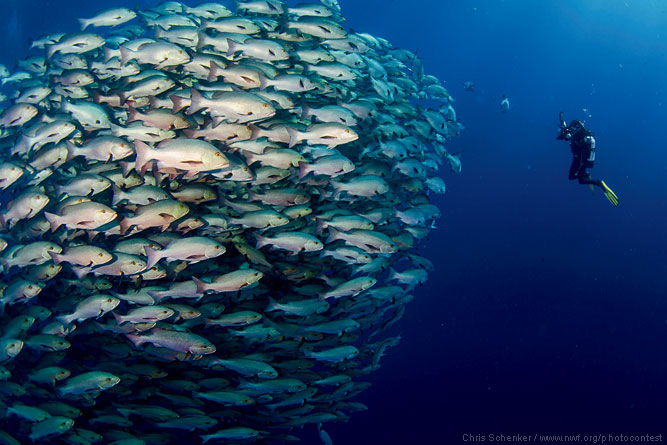 A whirling tornado of bohar snappers dwarfs a diver photographing the fish off Ras Mohammed National Park at the southern tip of Egypt’s Sinai Peninsula. “The fish come to these waters in massive schools every year to mate,” says Chris Schenker, a full-time college student who took this photograph at a depth of 30 feet. “It was an absolutely thrilling experience.” 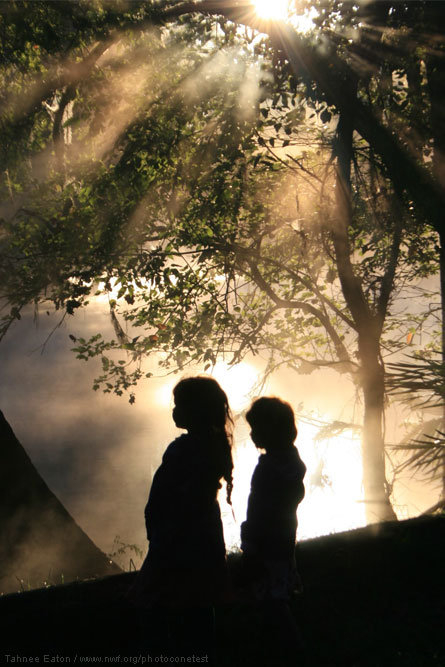 Silhouetted by dawn light and rising fog, young Tessa and Josie Eaton enjoy peaceful silence during a family camping trip at Ginnie Springs along Florida’s Santa Fe River. “We are big campers,” says their mom, Tahnee Eaton, who caught this tender moment during a family walk. “The kids love being outdoors, barefoot, running in the dirt, finding bugs and worms,” says Tahnee. “Camping instills a love of nature. It helps them get away from the city and slow down, learn about life, and just be kids." 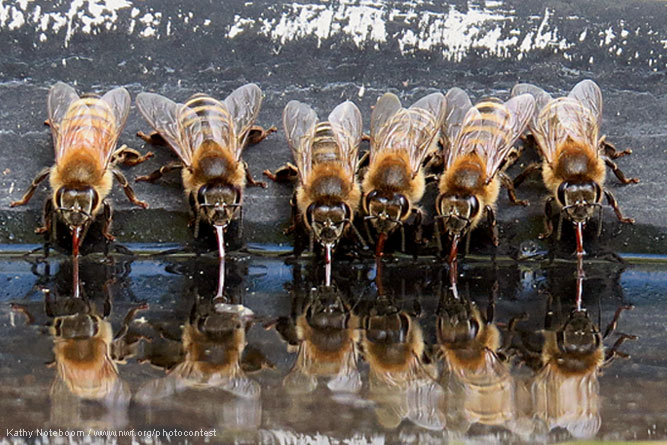 European honeybees find cool relief on a summer day, using their strawlike tongues, or proboscises, to sip water from a backyard birdbath. “The bees showed up at our bath every day for more than a week during an August hot spell,” says Kathy Noteboom, a Wisconsin school teacher. Though they’re not native to the United States, honeybees are vital crop pollinators, providing services valued at about $14 billion a year. Noteboom enjoyed this cluster of visitors from a friend’s hive: “They didn’t seem to mind me getting close to take their picture.” 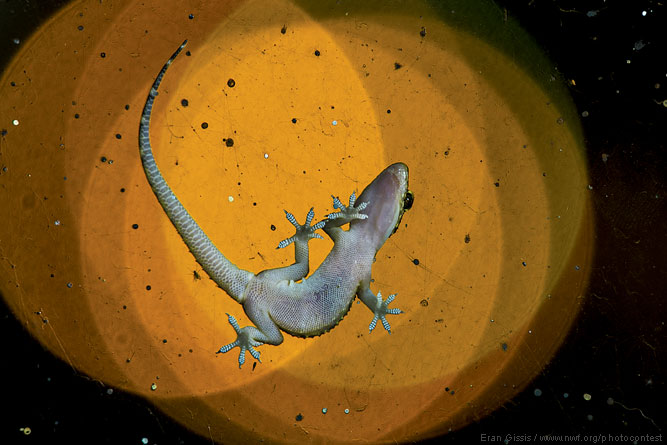 Specks of dirt on a windowpane only add to the intrigue of this portrait of a Mediterranean house gecko, framed by the glow of outside lights as it stalks insect prey. An animal researcher, Eran Gissis lit the creature’s belly with a flash while photographing it from inside a building in central Israel. “That window seems to be a favorite gecko hunting site,” he says. Only a few inches long, geckos are voracious hunters and masterful climbers. Research shows that tiny hairlike projections on their feet appear to form molecular bonds with surfaces, allowing them to cling upside down—even on the most polished glass. 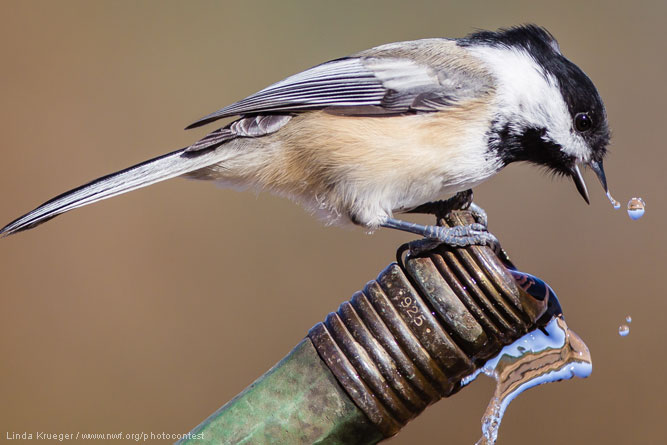 When this black-capped chickadee swooped in to grab a drink from a garden hose, Linda Krueger grabbed her camera to catch the whimsical moment. Krueger and her husband, Kevin—who participate in NWF’s Certified Wildlife Habitat ® program—own 20 acres brimming with food-producing native plants, bird feeders, nest boxes and plenty of water in a backyard pond. Yet when Linda began to wash her car, several birds flew in to investigate. So she propped up her hose to create a puddle—and got a chance to capture backyard nature at its best. 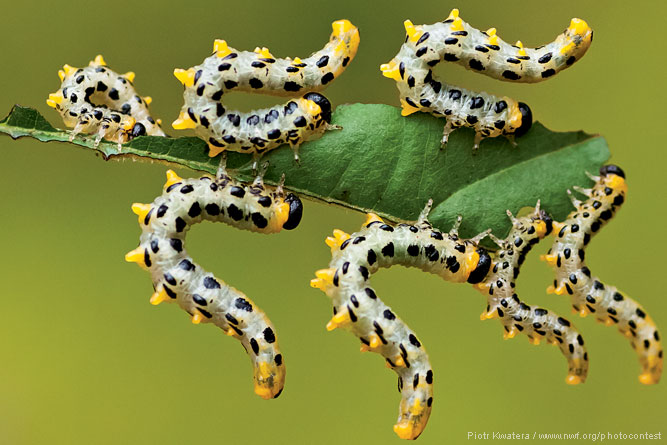 With geometric grace, sawfly larvae devour a leaf in Poland’s Niepolomice Forest. Professional photographer Piotr Kwatera found these creatures “quite accidentally,” he says, after bad weather forced him to abandon his plans to make images of other species. On his way home, he spotted these acrobatic larvae and used a macro lens to photograph their gravity-defying feast. 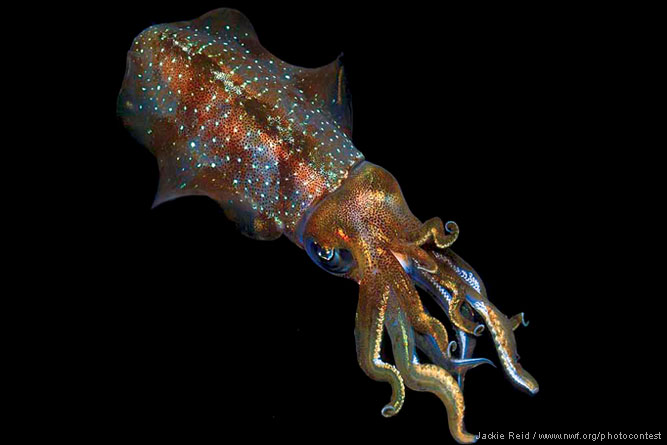 A 10-inch Caribbean reef squid lends a neon gleam to nighttime waters off the coast of Cozumel, Mexico. Jackie Reid spotted the flashy squid just a few feet below the surface during an August night dive. “It seemed willing to hang around while I repeatedly took its picture,” says Reid, a retiree who in recent years has traveled extensively to photograph marine life around the globe. 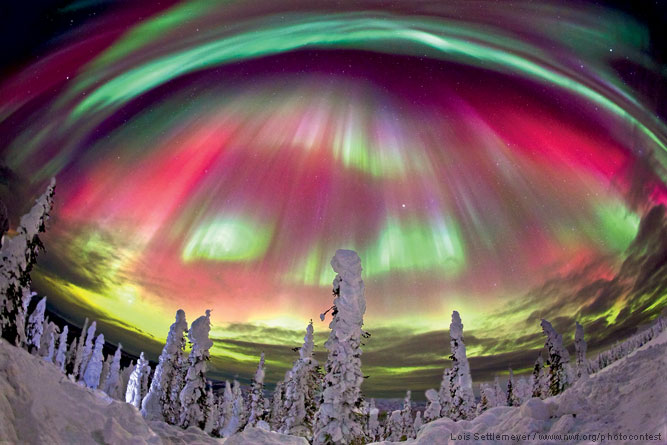 Rainbow hues of the Aurora Borealis paint the sky above a mute audience of snow-draped trees in northern Alaska. “It was a night I’ll never forget,” says Lois Settlemeyer, a retired corporate technician who made this photo on a March trip to the Arctic Circle. “As the clouds parted briefly, I was able to take one good shot of the dancing light”—one of nature’s most riveting spectacles. 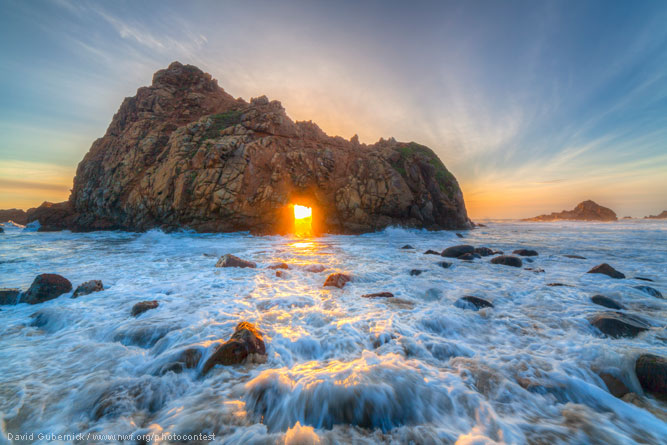 The sun gives one last hurrah before setting, peaking through the Keyhole Arch rock formation at Pfeiffer Beach in Big Sur, California. Late in December 2014, David Gubernick crouched as the water rushed toward him to make the image. “The tide was high, so it was not possible to get much closer,” he says. “I did get wet a bit, but it was certainly worth it.” This has become a popular spot for photographers hoping to catch the light show. “I have witnessed 20 or more photographers, standing tripod leg to tripod leg, gathered around to capture this wondrous event,” Gubernick says.