Sea level rise caused by climate change pollution is the single biggest threat to wildlife and habitats like the Chesapeake Bay. 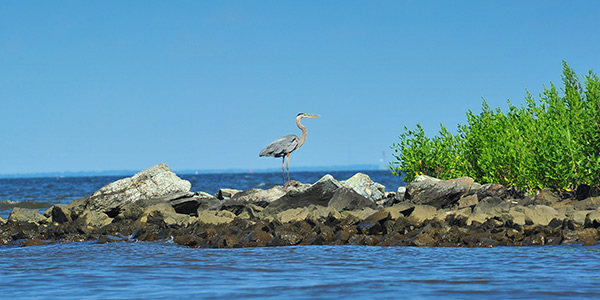 With its expansive coastline, low-lying topography, and growing coastal population, the Chesapeake Bay region is among the places in the nation most vulnerable to sea level rise. The state of Maryland is currently losing approximately 580 acres every year to shore erosion, placing natural treasures like Blackwater National Wildlife Refuge and Tangier Sound and the wildlife species that depend on them at risk.

Transitioning to clean energy sources, such as Atlantic offshore wind is one of the essential ways to protect wildlife for our children’s future. In the fall of 2010, environmental, health, faith, and civic organizations began a collaboration to bring offshore wind energy to Maryland. The offshore wind campaign illustrated a bold vision for Maryland’s cleaner and healthier energy future that inspired and energized thousands of citizens from across the state and captured the national spotlight. This effort resulted in the passage of the Maryland Offshore Wind Energy Act of 2013.

The campaign also galvanized and united the organizations involved, leading to the formation of the Maryland Climate Coalition. Comprised of national, regional, state, and local advocacy organizations, the Maryland Climate Coalition is committed to advancing policies that reduce greenhouse gas emissions and engaging diverse audiences in the demand for urgent action by decision-makers to address the impacts of climate change. A membership list and more information about the coalition and its work can be found at marylandclimatecoalition.org.

As a member of the steering committee and fiscal agent for the Maryland Climate Coalition, the National Wildlife Federation is working to:

Discover more about the benefits of offshore wind power, our work to support its wildlife-friendly development, and how you can get involved.