Marc Smith: The Great Lakes Side of the Mountain 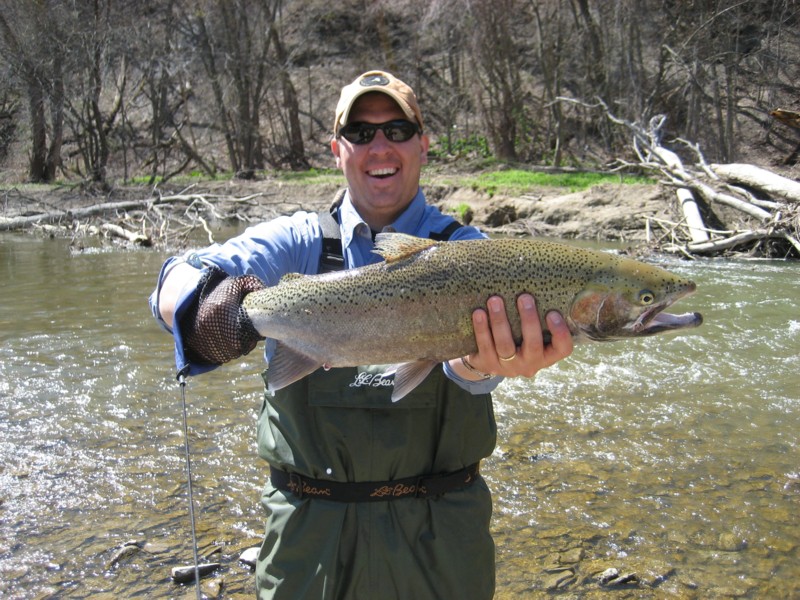 Marc Smith, like many National Wildlife Federation staff, found in his conservation career a chance to meld his personal passion for the outdoors with his professional policy experience. Unlike most is that he has been doing this for almost two decades, having a hand in achieving numerous conservation victories in that time. And it all started with fishing with his older brothers and friends in Virginia.

“I grew up in Virginia and my brothers and I would definitely spend most of our time outdoors. My mom was a music teacher and my dad was in the Navy, so my dad was gone a lot on deployment, so we kind of had free reign of the outdoors.”

They spent a lot of time fishing for bass in the creeks and ponds growing up.  And later in high school, he hiked and camped in the Blue Ridge Mountains. These experiences helped shape Marc’s conservation ethic at an early age.

“When I was ten years old I read ‘My Side of the Mountain.’ I was fascinated by just the idea of running away and living off the land in the woods.”

His parents fueled his interest in the outdoors with a Simon & Schuster Field Guide to the Birds of North America as a birthday present that same year. His dad was also an avid bird hunter who competed in trials, so Marc and his brothers always had English setters and other bird dogs growing up. By the time he got into high school, backcountry hiking became a pursuit for him rivaled only by basketball and soccer.

“I hiked probably 200 miles on the Appalachian Trail in Virginia, on various parts over various years.” 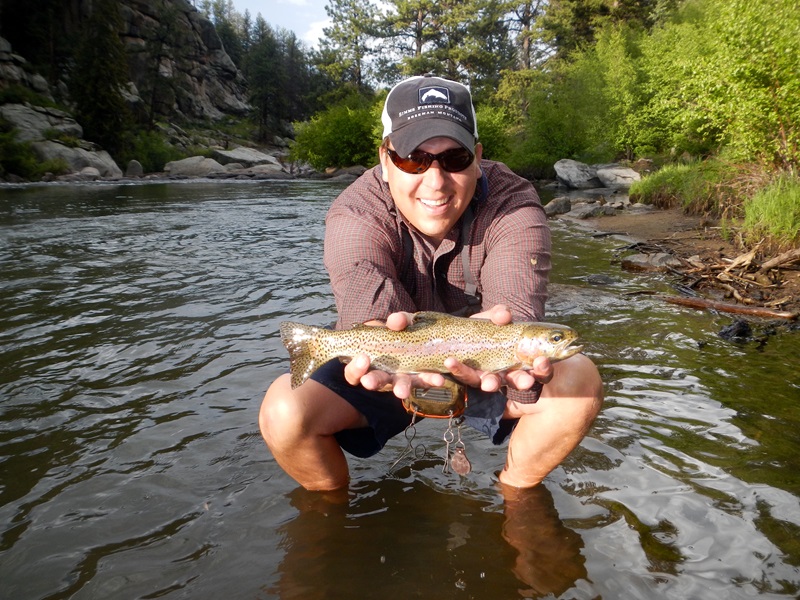 After graduating from West Virginia University, Smith went to work on Capitol Hill as a congressional staffer. That’s where he realized that he could make a living pursuing his outdoor passions, ironically.

“My first job was working for a Congressman and I really saw where my passion for the outdoors, hunting, and fishing, could sync with a career in politics and policy,” Marc recalled. “The first Congressman I went to work for was the late Bruce Vento of Minnesota.  He was a public lands and wildlife conservation champion.  He was the perfect role model for me to help me realize that I can take my passions for the outdoors and use public policy to protect it.”

This realization led to his long career with the National Wildlife Federation.

“The Congressman was the chair of the House Natural Resources Committee at various times.  When I worked for him in the late ‘90s, he was in the minority so he was the ranking member. He advanced an enormous amount of bills that created new National Parks, protected public lands, and helped establish new wilderness areas throughout the country. I learned a great deal from him about the power and responsibility Congress has in advancing fish and wildlife conservation laws.

“I didn’t want to work on the Hill forever. I wanted to take my passion for the outdoors and translate it into a policy career.  I saw a position opening for the National Wildlife Federation to be their public lands lobbyist, and I thought, ‘perfect!’ I wanted to work for a big, strong, influential wildlife conservation organization, and work on issues that matter to me. So, I left the Hill to work for NWF and after almost twenty years…I haven’t left.”

He did leave Washington, D.C. though.  After a few years lobbying for public lands, Marc transferred out to the National Wildlife Federation’s Great Lakes Regional Center as its regional representative.  He worked with NWF’s independent state affiliates in the region on various conservation priorities.  NWF’s affiliates make up the federation and set its conservation policies.

“Coming from working energy issues on western public lands to working on Great Lakes water issues was a big learning curve. I probably learned the most about how to work in this space, not from the policy wonks, but from the affiliates. It was a good way for me to start working in the Great Lakes region from the ground up.  I learned a lot about professional wildlife management from working with George Meyer of the Wisconsin Wildlife Federation, in particular.”

The Great Lakes made a big impression on Marc.

“Growing up on the East Coast we had salt water, but I was just totally blown away from the huge amount of freshwater up here.  I immediately fell in love with the Great Lakes. I have adopted them. I can’t imagine living anywhere else, now, because of the Great Lakes. And this passion for the Great Lakes has significantly influenced my professional policy work.  Quite simply, I am very lucky to have a robust career working for an organization that allows me to pursue my personal passion of protecting special places, like the Great Lakes.

Throughout that career Marc has worked on several campaigns critical to protecting the Great Lakes.

“I have also been heavily involved with the Great Lakes Compact, which protects the Great Lakes from diversions and helps keep water levels sustainable so that we can protect the largest source of freshwater on the planet – but also allow our region to thrive economically.

Throughout his career, working closely with affiliates and partners have been a core part of the work.

“I enjoy building relationships and creating new partnerships.  I get a lot of my inspiration by working in coalitions.  Here in the Great Lakes, we thrive on coalition building.  As a result, we have been quite successful in protecting the Great Lakes. I approach my job in a very pragmatic way.  As such, I focus on building bridges between the hunting and angling conservation community and with the environmental community.  In my opinion, we are more effective when we all work together to solve our conservation challenges.  Advancing these coalitions and building strong networks has been extremely rewarding.”

It isn’t all work and no play, though. The fish and wildlife of the Great Lakes region have also been a draw for this lifelong outdoorsman.

“I grew up spin casting for bass.  Over time, my interests have evolved into my love of fly fishing because of the simplicity of it.  Wading into the water, reading the flow, the bug activity, and identifying a fly to put on your line. It’s kind of a poetic experience on the water for me. Michigan provides tons of opportunities to fish for trout within a short drive so it’s great.” 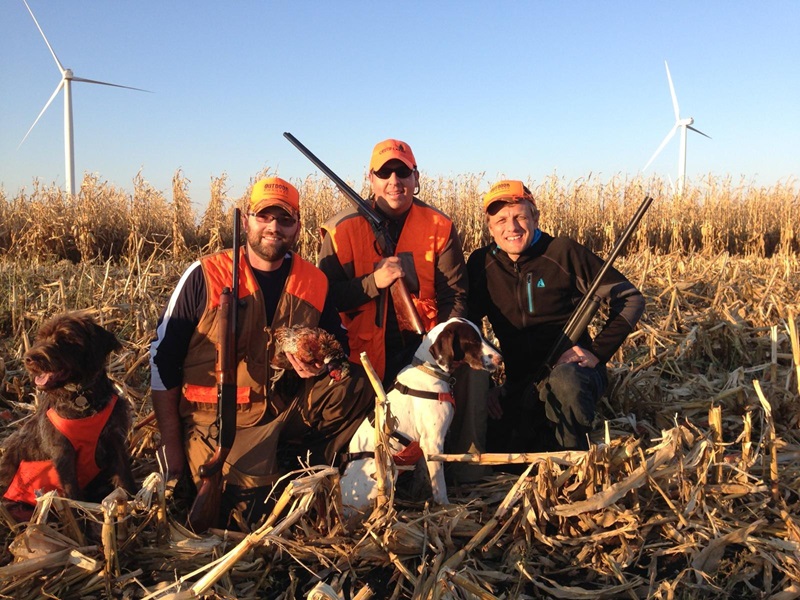 “I’ve really tried a lot of different things – pheasant hunting, turkey and duck hunting, quail hunting – but I’ve really zeroed in on grouse hunting. To me, it’s just a walk in the woods with a shotgun at a beautiful time of the year when the leaves are bursting with color. And, nothing beats the exhilaration of a wild grouse flush.”

“It’s also the camaraderie of grouse camp that I have just come to love and what brings it all together for me. Spending all day in the woods, coming back and cooking up the grouse from the field and enjoying it with a fine bourbon. Sharing of tall tales over a roaring fire. That to me is the whole experience, the heritage that I love and want to protect.”

It’s this experience using the outdoors that makes Marc the conservationist he is, now as the policy director for the National Wildlife Federation Great Lakes Regional Center.

“Hunting and fishing has helped me become a more effective conservationist because I understand the connection between protecting the habitat for fish and wildlife and our quality of life. Working for NWF allows me to be able to protect public lands, protect clean water, and pass on an outdoor heritage to my kids and future generations.”