Staff Profile: Artemis's Ashley Chance is converting her experience hunting deer and studying them as a biologist into creating a community of conservationists. 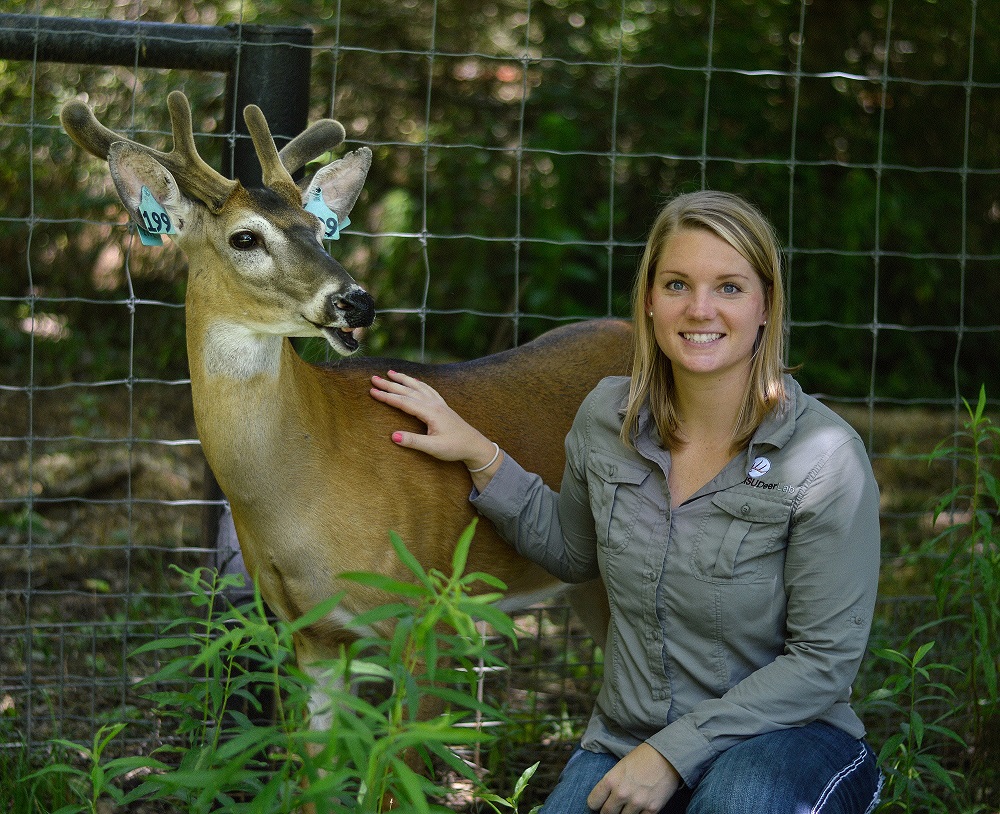 Ashley Chance, the new Southeast Coordinator for the National Wildlife Federation’s Artemis program, grew up hunting deer in Minnesota and accompanying her dad on western elk hunts. This experience led her to become a conservationist and she plans to help other women find that same connection between hunting and conservation.

“My goals and the goals of the program overall are to create a community of really connected sportswomen in the Southeast and support them in becoming hunters and anglers, or hopefully getting them to the next level where they’re independent and they’re going out there on their own and they feel like they have the skillset and confidence to pursue game in the field,” she said. “And to encourage them and support them in becoming conservation leaders.” 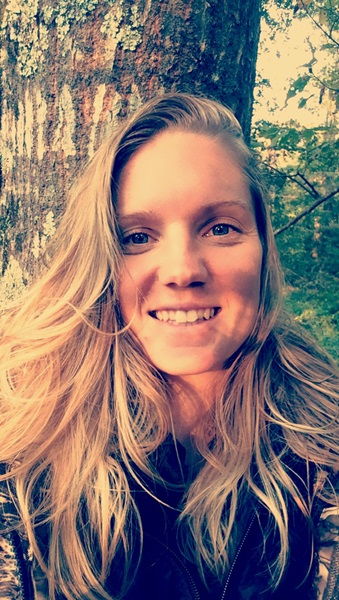 Ashley started hunting and fishing at an early age, though she says she’s more of a hunter than an angler.

“As a very small child I started fishing with my extended family. I had two uncles and my grandfather really big into fishing, so I was just out on the water with them. I remember fishing with fruit snacks as bait, I was in that age group at the time. And that was just fun panfish and lake fishing in Minnesota.”

It was her dad who introduced her to hunting, though, and that shaped both her love of the outdoors and her career as a conservationist.

“My dad doesn’t fish, really, but he’s a big game hunter. I started deer hunting with him when I was about 13 and then from there, progressed to other big game like elk. And then in the latter part of high school, I started kind of casually hunting upland birds, pheasants, and some waterfowl, like geese. My big game hunting experience really shaped me in a big way.”

It wasn’t just taking her hunting, but the way they hunted that shaped her. 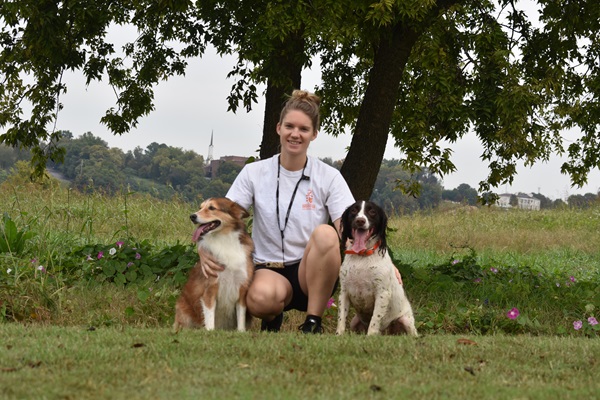 “Getting started as a hunter at a young age meant that really for my entire life - I can remember one woman that went elk hunting with us – but it’s just me and I was the only girl and that wasn’t something that I was ever upset about,” she recalled.

“My dad really set the precedent that I was to be taken seriously in the field and I was never treated differently by anybody that I hunted with.  I feel really, really fortunate that my dad took that approach because I think that it shaped the way that I saw things in a really constructive way so I felt empowered. I felt like, of course I could go learn this stuff that my same-age male cousins were learning and do just as well as they could.”

It didn’t take Ashley long after getting to college to figure out that she could combine her love of the outdoors with a career.

“When I went to college I didn’t know that wildlife ecology or wildlife management was a profession, which seems crazy now, but I realized that during my freshman year and immediately transferred to Stevens Point, Wisconsin, which is a great program for wildlife.” 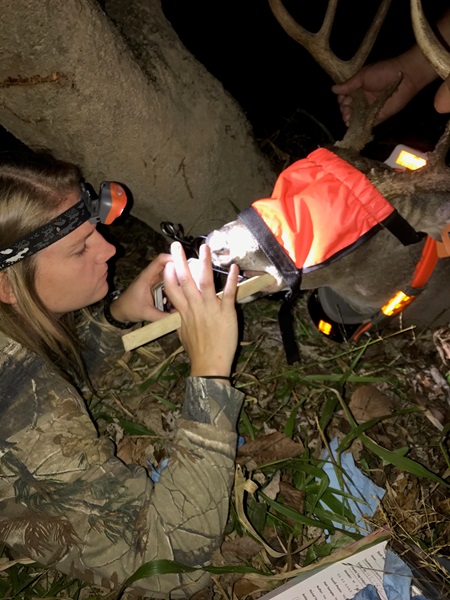 Hunting was her introduction to deer, but it was the deer themselves, and other large ungulates, which captivated her.

“Deer as a species – and other large ungulates, just fascinated me from the get-go. I have always been drawn to animals like that and to see an animal like that living in the wild, and just kind of doing their own thing and how well they mesh with the environment, and going out and seeing one arrive where you’d hope one would, that was really fascinating to me.”

That fascination served Ashley well after college working as a wildlife technician on ungulate research projects.

“There would be some research project and they would need to capture animals to track them and collect data. And so I ended up catching deer in, I think, seven states – adult deer, fawns – so it was very hands-on. I would literally be tackling deer, immobilizing them and measuring them and just always loved being close to animals like that.” 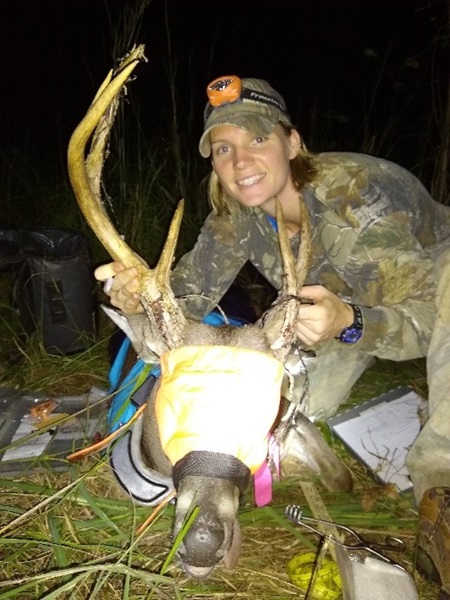 After working in the field around the country and two years serving in West Africa in the Peace Corps, Ashley went to graduate school at Mississippi State, where she met her husband, also a wildlife biologist. He introduced her to duck hunting, too.

“I had done some duck hunting previously in Wisconsin as an undergrad, but duck hunting is kind of hard for a lot of people to get into because it requires a decent amount of equipment, depending on where you live,” Ashley said.

“When I met my husband, he had been getting serious about it for probably a year before we met, so we started investing in equipment and investing a lot of time. That was a great thing about graduate school. We had some flexibility so if the day looked really good, we could go and hit a pond nearby. There are a lot of ducks in Mississippi, and there’s a lot of opportunity. It was a great place to take a deep dive.” 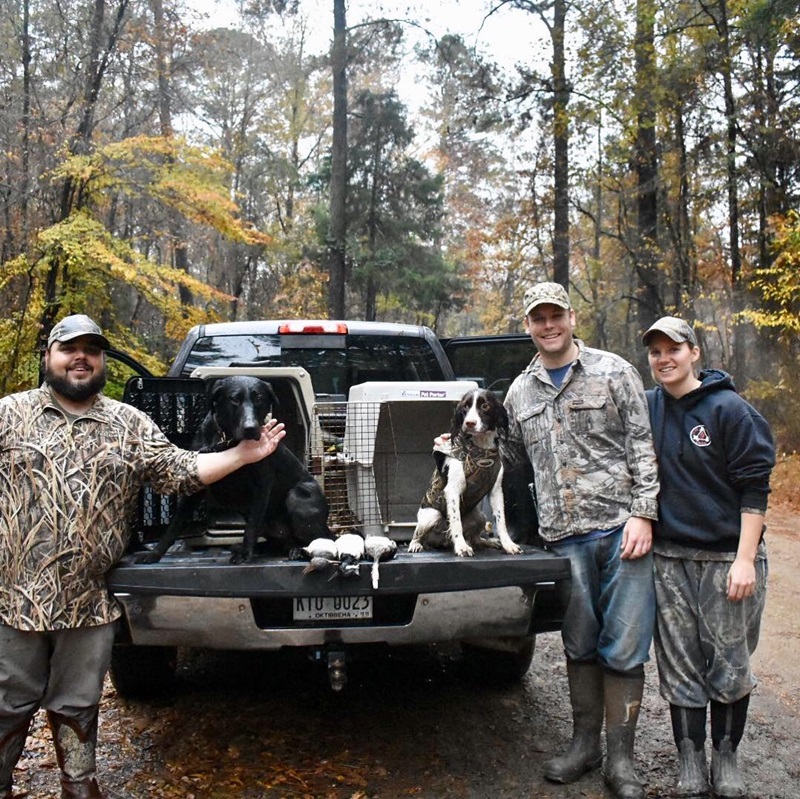 Now that she’s with Artemis, Ashley wants to translate her hunting experience into creating opportunities for other women to take a deep dive into hunting and creating a community of hunters and conservationists in the Southeast.

“I think there’s something special about being mentored by a woman when you are one and having other women as a resource to go and talk to about challenges and struggles. And to have conversations that have a little bit of a different spin on them. One of the terms that we toss around is having emotionally intelligent conversations about hunting.

“Just having a network of women that can rely on each other is going to help empower them and really give them a sense of belonging and ultimately the sense of ownership that’s going to propel them into becoming advocates for wildlife.”