Keith Ward: Living with the Land

Staff Profile: Keith Ward didn't just grow up learning to live off the land, but with it 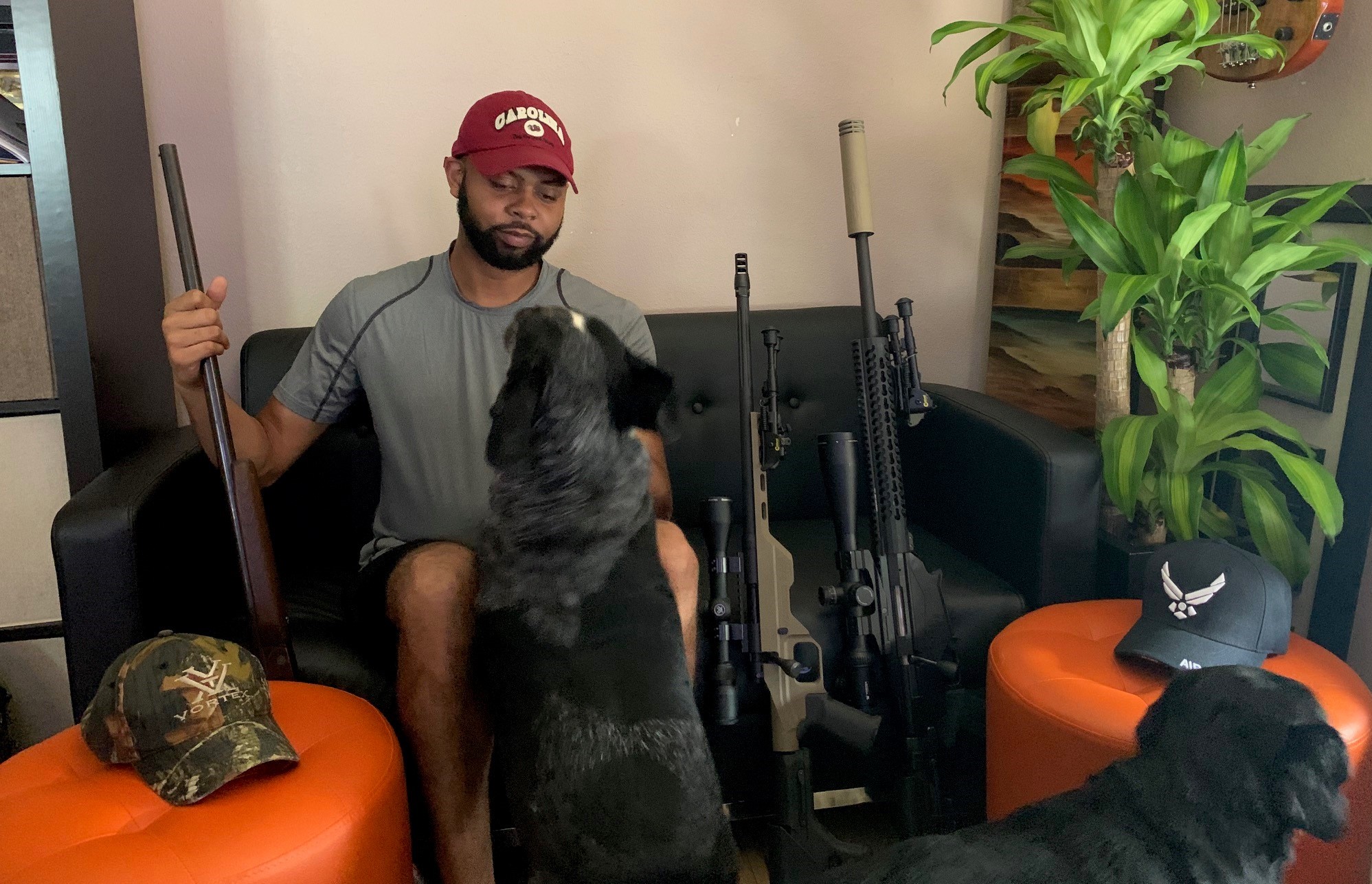 Keith Ward is not your typical company’s IT guy. He has been instrumental in helping the National Wildlife Federation weather the storm of COVID-19 through having the foresight to set up its remote working capability through Zoom even before the pandemic hit. He also co-chairs NWF’s internal staff equity and justice committee. Working under pressure is nothing new to him, though: he served eight years in the Air Force detonating explosives before going to college. It was his outdoors roots in the Carolinas, though, that led him to conservation.

“Hunting and fishing is a huge part of growing up in the South, even if you’re hunting small game. Fishing’s a big thing, especially in the Low Country,” Keith said. “It’s about having respect for the land and all she does to provide for everyone, and she does a great job.

“People tend to say ‘live off the land,’ but where I come from it was called ‘learn how to live with the land.’ You know the seasons for everything and you work to maintain and keep her beautiful for the next generation.”

Family was at the heart of Keith’s earliest experiences outdoors. Growing up in the state capitol of Columbia, the outdoors was an escape from the city to visit family.

“The outdoors, for a lot of people, it’s that first experience of bonding with a father or mother, family time, it was what you probably did when you went to visit grandparents. Maybe you had grandparents who stayed by a lake, or your aunt or uncle who lived closer to the sea. That 4:00 or 5:00am fishing trip every day was a family experience.”

The outdoors was also a source of learning about responsibility for Keith, even before he enlisted in the Air Force.

“As someone who served in the military, I’m an avid firearm owner. It’s learning about firearm safety and the responsibility that comes with that. This is a tool to provide for your family, it’s more than just about keeping your house safe. You get up early morning and you’re making sure that you’re going to provide the meal for the day. It’s being responsible. It’s that first time that you get to have something that responsibility is put on you.”

The food provided by hunting and fishing was more than just a byproduct of the experience for Keith: it was the point. Growing up in a food desert, obtaining fresh meat wasn’t taken for granted.

“Being from the inner city, fresh food was scarce. So having the opportunity to even go down out to the country with family or friends, learning how to actually live with the land and provide your own food, like that was fresh meat for us. Hunting and fishing became my experience with fresh meat, it wasn’t like the processed stuff we’d typically end up getting from the grocery stores.”

The first outdoors experiences Keith remembers were at family reunions in North Carolina, where the festivities and relaxation revolved around fishing.

“Typically summertime would be family reunions and everyone would stay at my Aunt Bea’s house. I couldn’t really appreciate it until I really got older about the fact that we owned some land up there. I didn’t understand the significance of that, especially having a Black family, in the South, owning a significant portion of land in North Carolina.

“This was basically my summer vacation, going up to the family reunion in Rocky Mount. As a young man, growing up, you’re still a kid until – finally – the teenage boys and the men say that you can come with them. That’s when you made it. So when they finally said, ‘Hey, Keith, you’re going with the big boys,’ I finally had this feeling like, ‘I’m grown now.’”

Fishing helped him understand the men in his family more, too.

“For the older gentleman in the family, that was their solace. You got to see the humanity in these men because, for some men it’s difficult to express their emotions. You got to see that light and that joy in their eyes and appreciate the hard work they do for our collective family, because they work hard to provide and fishing gave them a place of peace that I’d never seen from older men, growing up.

“They would sit out there for hours and just cast and laugh, with their beers, and then sometimes they would just sit there in silence. The men finding their solace in the fish that was the center of joy that the entire family got. You got your fresh greens, and the women were preparing the sides and the men are bringing home the meat, and as you got a little older you appreciated the little objects of peace for the different demographics in the family. The music’s playing, the old folks got their blues records playing, dancing and snapping their fingers, the kids are enjoying being kids, and we’ve created this loving environment all over fish.”

Keith started hunting deer in college, after the military, with military buddies and college friends. Once again, food was the motivation.

“When I bought my house, I wanted to get into getting meat for the year. It’s just something about, when you do it, it tastes a little better, the meat’s a little more tender.”

Though he admits he’s not the best bowhunter, he can “shoot the wings off a fly” with a rifle, he jokes.

“I actually use my great-grandfather’s .30-06. My grandfather gave it to me when I started working at NWF. I ended up getting the wood refinished with some North Carolina wood on the buttstock. That’s probably my favorite firearm that I own, because it’s my great-grandfather’s. It’s something that I have with that history. And it’s beautiful. It’s gorgeous. It’s a piece of art, just the way it feels in your hands.

“He used that to provide for his family. For me to hold something that my great-grandfather had in his hands, that’s history I can’t get back from anywhere. It makes the stories more real. It makes me more connected today and I’m grateful for it.”

Fishing is still his first love outdoors, though.

“Fishing is a big thing because I like the water. I’m not going to lie. I’m an ocean boy, a beach baby. So going down to the Low Country, there’s a lot of freshwater bass and panfish. Tarpon. Catfish up in North Carolina. Being from the Carolinas, I just love seafood. And I’m a fish guy.”

While Keith isn’t your typical company IT guy with a background in the military, hunting and fishing, he wants people to understand that he’s a lot more typical of a hunter and angler than often gets portrayed in outdoor media.

“Typically, when people picture hunters and anglers, they picture an older white guy, and I’m like, no. Everybody enjoys what the land has to provide. Everybody of all colors in this country have some kind of history to fishing with your grandfather, or hunting with your dad, or even in the cities with the trucks parked and the lines cast over a bridge. That’s what it’s about. We’ve all done it, and you should be able to see people like you and envision people like you doing this.”

Bringing people of different backgrounds together for conservation was part of what motivated Keith to work at the National Wildlife Federation.

“Ultimately, it’s about how you feel at the end of the day about it, working for an organization that’s worked on public lands, for instance. Getting people together who wouldn’t necessarily be in the same room. Sometimes these demographics get really polarizing, when we all want the same thing.”

Keith sees a collective fellowship in the experiences hunting and fishing offer.

“We all have this love for nature, for fishing, hunting, because it all comes down to what we want to do for our families, and taking care of those ecosystems so they can take care of us.”

Not just living off the land.

Living with the land.